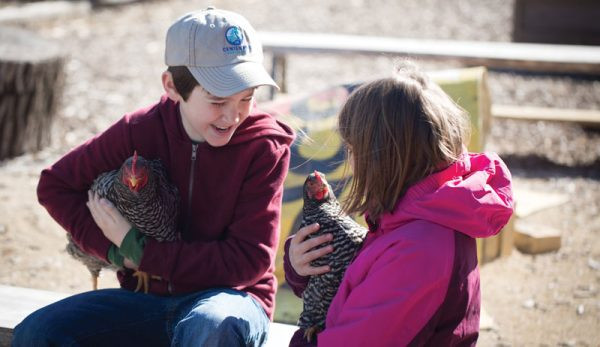 In 2017, I decided to bring chickens to the inner-city elementary school where I teach in Chicago, Illinois. The students were over the moon at the prospect. Most had never touched a chicken.

But I was nervous‚Äîafraid, really. I didn‚Äôt have any chicken experience and was hesitant to commit to an animal I didn‚Äôt know firsthand. So I signed up for a chicken rental service. My school liked the arrangement so well that 2022 will be our fifth consecutive year of renting chickens.

Why rent chickens? It seems crazy when a chick costs less than $5. But consider my side of the equation. I didn‚Äôt have the equipment, didn‚Äôt want the birds year round and worried about everything from lurking predators to the hens spending winter in a playground coop.

Renting chickens is a terrific solution to these problems and not just for me. Many folks discovered chicken rental during the COVID-19 quarantine, and the chicken rental industry is expanding at a dizzying pace, generating tidy profits along the way. In the not-too-distant future, two or three chicken rentals may be competing in every city, town and suburb nationwide.

My chicken-rental story hints at some of the factors driving this niche industry. First, there‚Äôs the need for convenience. My rental package includes regularly laying hens, coop, food, feeders and replacement chickens if one dies, all delivered in spring and picked up in fall for a fee just under $1,000.

That‚Äôs a lot of money. It‚Äôs also a lot of value‚Äîone-stop chicken shopping, if you will. I didn‚Äôt have to research breeds or drive around town comparing feed prices.

Second, rental chickens provide a limited commitment. Most people new to chickens aren‚Äôt sure if they‚Äôre in it for the long-term. As a teacher, I badly needed an out if something went wrong, such as if a student got salmonella, parents were up in arms and the school chickens were blamed. I needed a way to give the chickens back without sending them to an animal shelter.

(Chicago‚Äôs shelters are overwhelmed with chickens that people have decided they just can‚Äôt keep.)

Third and perhaps most important, chicken rentals provide a connection to farm life. The farmers I rent from, Rob and Susan Yeary, have become almost honorary teachers at my school. When their schedules allow, they spend an hour during drop-off talking with students, showing them how to handle the hens, and pointing out features of chicken anatomy. Those wonderful, meet-a-farmer moments are like a field trip to the country without the students ever climbing on a bus.¬Ý

Read more: Can chickens talk? Sure! And they have lots to say.

What You Get When You Rent¬Ý

A rental chicken is more than the bird itself. It‚Äôs also a package of supplies, information and support that make the rental experience as fail-proof as possible. One of the advantages of renting chickens is that you always get hens at peak productivity, laying every day. And you‚Äôre typically getting a variety known for being docile and laidback‚Äîthink Barred Rocks and Cinnamon Queens.

Rental packages typically start at two hens and go up to six or higher, with escalating fees, of course.

The coop is a straightforward affair, often smartly painted and with wheels on one end so customers can use it as a chicken tractor. Newbie renters have no idea how simple chickens‚Äô needs are, so some rental businesses offer fancier coops appealing to customers‚Äô sense of whimsy.¬Ý

Many rental businesses also rent out chicks to hatch or raise. These packages are separate from the laying hens with a different, usually lower price. It‚Äôs not difficult to imagine why families with young children would jump at such an offering. Why go to a petting zoo when your kids can have their own for a couple months?

The length of a rental can vary widely. I have seen chick rentals as short as two weeks and hen rentals as long as seven months. Virtually every chicken rental business offers free delivery and pickup within a certain radius.

Delivery and pickup are typically available outside that area with added fees.

A great deal of customer education is built into rentals because most of the customers don‚Äôt know much about day-to-day chicken care. Some rental businesses put lots of this information on their websites. Others give customers a homemade manual or a favorite poultry guidebook. Still more is passed along through email exchanges, phone conversations and long chats during the delivery.

Toward fall, the business owner reaches out and offers renters a chance to purchase their chickens, often with a package of supplies. It‚Äôs a last-minute chance to capitalize on the attachments built up over the long summer.

Variations on a Theme

There are as many ways to structure a chicken rental as there are breeds of chickens. Doug Anderson runs a small business, The Chicken Rental Place, from his home in Goochland County, Virginia. He rents up to 15 coops a season, with at least two hens per coop, while holding down a day job as a design engineer.

Most of his customers are young families. ‚ÄúIt gives them a chance to try chickens out without spending a lot of money,‚Äù he says.¬Ý

The growing popularity of rental chickens has also drawn nonfarm businesses to try it. Dave Zahn, for instance, is a carpenter in Imperial, Missouri, who used to spend most of his time remodeling human homes. But Zahn‚Äôs sideline businesses‚ÄîA+ Builds and The Easy Chicken‚Äîbuilding pet homes, including deluxe coops with features such as radiant heating and ceiling fans, have grown so big that now they‚Äôre his main job.¬Ý

Zahn rents a coop for $400 plus a delivery fee. He will also buy back unwanted birds from coop renters at season‚Äôs end, which is unusual because he doesn‚Äôt rent or provide chickens. He is buying back birds the customers purchased and raised on their own.

‚ÄúThat way, they can have confidence that their hens end up with a good home,‚Äù he says. Zahn expects to rent 10 coops this season.

A few businesses have ridden rentals‚Äô surging popularity to become relatively large. Rent the Chicken, started by Phil and Jenn Tompkins in 2013, has more than 30 affiliates (they‚Äôre not ‚Äúfranchisees‚Äù‚Äîit‚Äôs a legal thing) in Arizona, Connecticut, Delaware, Florida, Georgia, plus 19 more states, the District of Columbia and three Canadian provinces.

The Tompkins do the sales and customer support. Their affiliates throughout the country do the hands-on deliveries and pickups. Rent the Chicken‚Äôs sales grew 48 percent from 2020 to 2021. And 50 percent of the company‚Äôs renters either adopt the chickens at season‚Äôs end or ask for the same birds next year‚Äîall but guaranteeing they‚Äôll be repeat customers.

(Full disclosure: The hens at my Chicago elementary school came from Rent the Chicken.)

One Rent the Chicken affiliate is Farmer Joe‚Äôs Gardens, a full-service garden center and farm market in Wallingford, Connecticut. Expanding into rental chickens grew out of customers‚Äô interest, according to co-owner Ida DeFrancesco. She and her husband, Joe, opened the retail farm stand in 2010 and had chickens at the farm stand to educate and entertain our community.

During their chicken 101 workshops, they noticed that folks were curious about hens and also paralyzed about how to have their own chickens.¬Ý

‚ÄúOffering rental chickens has also deepened our relationships with our community,‚Äù Defrancesco says. ‚ÄúFolks want chickens, and they want a guiding hand to start off right. It‚Äôs a true joy to share the experiences of chicken-keeping. We get to see barnyard life every day. It‚Äôs normal to us.‚Äù¬Ý

Chicken rental lets the community experience a little bit of farm life without having to figure everything out themselves. ‚ÄúFrom the first pips of life, to the first egg from a young hen, to being followed by your hens when you walk around the yard‚Äîwe want to share that,‚Äù she says. ‚ÄúIt‚Äôs a natural extension of our agricultural passions.‚Äù

Then there‚Äôs RentACoop, a completely unrelated business with 15 employees renting in six East Coast states. Started by a young couple, Diana and Tyler Phillips, in 2012, they rent 40 coops a year. That‚Äôs a self-imposed limit, because they focus instead on their chick hatching and chick rental business. They rent thousands of chicks a year, mostly to schools and families with children.¬Ý

RentACoop also sells a significant amount of poultry merchandise. The Phillips develop and manufacture products ideal for the backyard coop owner. ‚ÄúWe weren‚Äôt thrilled with the poultry products on the market,‚Äù Diana Phillips says. ‚ÄúSo we set out to create solutions to typical poultry problems. For example, the hens‚Äô waterer was always getting poop in it. So, we created a waterer that the hens can‚Äôt poop in!‚Äù

The Phillips have a built-in market of thousands for their merchandise via their rental business.

The answer is yes, of course, or else so many folks wouldn‚Äôt try out the business. That said, it doesn‚Äôt necessarily generate lots of dollars right away, nor are there many folks renting chickens as a full-time occupation.

Jenn Tompkins of Rent the Chicken encourages her regional affiliates, all small farmers, to think of renting as a way to bring in more direct-to-consumer dollars. ‚ÄúWe are creating an additional revenue stream, all while helping to bring sustainability, joy and fresh eggs to the backyards of many.‚Äù

Tompkins notes that the profit margins can be small during the first years while building coops for customers. Once the rental coops are paid for, profits tick upward.¬Ý

For Doug Anderson, the Virginia engineer-and-chicken-renter, renting chickens is a passion project that happens to turn a profit. ‚ÄúIt generates my fun money,‚Äù Anderson says.¬Ý

Time and again, folks established in the business noted that chicken rentals, like farming itself, are about more than money.¬Ý

‚ÄúIt‚Äôs so fun when you drop off chickens,‚Äù Anderson says. One mother arranged the chickens‚Äô drop off to occur during a daughter‚Äôs birthday party‚Äîto shrieks of delight.

‚ÄúIt‚Äôs hard to take a break once you start,‚Äù Phillips says, echoing the lament of many a farmer. ‚ÄúWe really do it because we love the joy it brings.‚Äù

A¬Ýfinal encouraging word comes from my personal favorite: farmers and Rent the Chicken affiliates Rob and Susan Yeary. Every year, they bring hens down from their Michigan farm to my Chicago elementary school.¬Ý

‚ÄúWe initially got chickens … as a stress reliever from our busy jobs,‚Äù Susan Yeary says. ‚ÄúWe soon found out what a joy they are, and renting has allowed us to share the same love with others that didn‚Äôt know where to start.‚Äù¬Ý

Find out more about renting chickens from the places mentioned in this article.¬Ý

This article originally appeared in the July/August 2022 issue of¬ÝChickens¬Ýmagazine.

Christopher Weber runs a school farm in Chicago, Illinois. Chickens have brought a lot of laughs and love to school‚Äîeven though students regularly give the chickens names such as Nugget and Waffles!