The Redemption Of Thomas: The Story Of A Bad-Boy Rooster

Thomas was a good egg who quickly devolved into bad behavior. Over time, though, he showed himself to be a wise and nurturing mate. 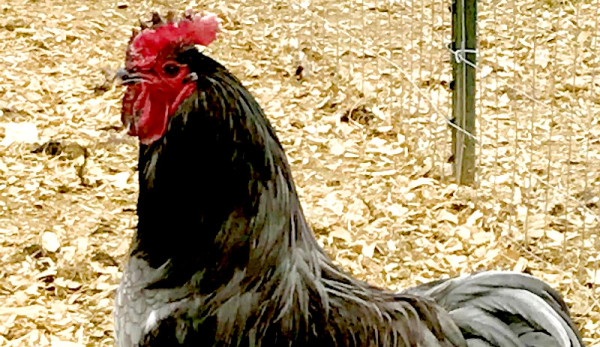 We all have one: the favorite chick out of all the little fluffs. Our 2016 Orpington hatch yielded 24 babies, each of them soft and lovable. One little chick, however, caught my eye from the moment his fuzz was dry. A soft slate gray, this downy chick came straight to me the day I began the exercises I use to familiarize our infant poultry with humans. He showed no fear or hesitation but rather hopped right into my hand, cocking his head at me as if to say, āWhat next?ā

From that moment on, that chick was my itty-bitty buddy. I showed all of our babies a lot of TLC, but Little Blue got so much more ā¦ and not just from me. When not in his brooder, he was contentedly dozing in my son Bryceās gentle grasp as Bryce sat on the couch reading. My husband, Jae, would pause to talk to him every now and then. And yes, there were many times that Little Blue kept me company as I worked on my laptop. He was spoiled, but he was a sweetheart.

Once his feathering, comb and legs announced he was a boy, Little Blue became Thomas Orpington. It seemed an awfully pretentious name for a small chick, but he soon grew into it as he and his hatchmates moved into that gawky juvenile stage. Before long, our Orpington flockāthe ānewā Orpingtons, as we called themāhad outgrown their juvenile brooder and needed their own coop and run.

I originally planned to have our existing Orpington flock take the new kids under wing in our main coop. However, our āOrpingtonā flock includes Alexandra Royal Palm, who believes she is a chicken; honorary Orpingtons Diana Cochin and Dolly Ameraucana; and a half dozen actual Orpington hens. These much larger, older girls would have made mincemeat out of the little guys. We quickly repurposed our former Cochin coop, moved it into position, and in went the younger birds. Everyone was happy.

Except for Thomas. Our Orpington flock free ranges; the girls know their boundaries and always return to their coop at night. The new chickens were a curiosity for them and, instead of roaming our acreage, the hens wandered back and forth along the new Orpingtonsā run fenceline. This agitated Thomas immensely, and heād match the older birds step for step from the inside of the run. His fellow flockmates acknowledged the existence of the other Orpingtons, but only Thomas became unsettled by them.

I soon learned why. In a continued effort to unite the two Orpington flocks, I opened the run to allow the new Orps to free range. My hope was that the older girls, now accustomed to the newcomers, would show the younger birds the ropes. The moment the run gate was open, Thomas shot out, raced over to the older Orpingtons, and attempted to mate with every single hen. I say attempted because some of the girls screeched and flew away, while a couple drove him off. Thomasā male flockmates came to the rescue of the remaining girls, ganging up on him and chasing him away.

This scene replayed almost daily and, to my dismay, Thomas expanded his amorous pursuit to include the pullets in his flock. The four other Orpington boys wouldnāt stand for this. In a united front, they continually blocked him, ran him off or jumped on him as he mounted, knocking him off a poor girlās back. I was horrified by Thomasā behavior. In all my years of chicken rearing, I had never seen a cockerel so hormonally driven. He even tried for our Ameraucana hens, despite their being inaccessible to him, safely enclosed in their run. Thomas quickly became the pariah of the pack. No one, male or female, wanted anything to do with him. Thomas was smart, though, and changed his tactics. Instead of approaching a female head on, heād skulk out of sight until none of the other boys were around. Once the coast was clear, heād race toward his victim, do the deed, then dash to a new hiding spot.

As the girlsā backs began attesting to Thomasā successes, I began to despair. How could my favorite chick have become this total jerk? Family and friends suggested selling him. But I couldnāt saddle somebody with this aggressive bird. Besides, Thomas was turning out to be a real stunner. Instead, I started capturing him and putting him in āboy jailā to cool his heels. To my shock, each time Thomas was incarcerated, the tractor serving as his holding cell would be surrounded by pullets and hens waiting for his release.

Over the next year, the dynamic of our Orpington flocks changed. Thomas and his harem, as I dubbed them, moved into the main Orpington coop. Every morning, heād lead his girls away from the other birds, returning at dusk. This way, Thomas avoided the other males, who now chased and attacked him just for being near them. Unfortunately, Thomas now caused me different headaches, as he and his harem spent the day digging up my front gardens, making messes in our barn, and getting in the way of vehicles on our driveway. Jae once again urged me to sell him.

Recently, still floored by the fact that any girl in her right mind would want to be with Thomas, I started keeping a closer eye on the blue Orpington boy. What I discovered blew me away. Thomas led his girls into our cool, shady barn on hot days and rainy days, keeping the girls in one specific spot and preventing them from exploring any further. The disastrous digging in my front gardens? Thomas was just scratching up insects to feed his girls. And, contrary to what Iād assumed, Thomas didnāt keep his harem in the front yard all day long. He escorted his girls back to the coop several times a day so that they could lay their eggs. About a week ago, Thomas and company were returning to the front yard following a coop outing when the sky opened up. The blue roo quickly led his harem to shelter under our deck while the other boys did nothingāfor themselves or for the other girlsāas it stormed.

My biggest surprise came a few days ago. Iād bought blueberries at our local farmersā market and, sadly, a good number of the berries were in bad shape. Iād headed outside to give them to the Ameraucanas when I encountered Thomas and his girls crossing the driveway near our garage. I figured what the heck, one set of birds worked as well as another. I tossed a few blueberries in Thomasā direction, who immediately started clucking. The girls instantly clustered around him but did not go after the blueberries. Thomas then picked up a berry, turned to the hen closest to him, and she plucked the berry straight from his mouth! As she hustled away to enjoy her treat, the next girl stepped up to take a berry from Thomasā beak. I was so fascinated by this behavior that I offered Thomas berries from my open palm, just like I used to offer him treats as a chick. Thomas regarded me for a few heartbeats, then gently plucked the berries from my handāand fed them to his harem. Not once did he eat any of the blueberries himself.

Our bad boy had become a wise and nurturing mate. Thomas had definitely redeemed himself in my eyes, just as he had in the eyes of his girls. Iām glad I ignored all the suggestions to sell him. I always knew there was something special about that little blue chick.