Run Defense: Build Your Chicken Run to Keep Out Predators

Building a chicken run can provide your flock more safety, but only if it's designed to keep predators out. 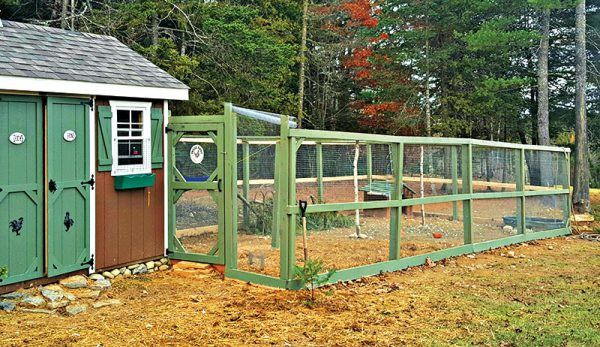 Unless you have a dedicated livestock guardian for your flock, itŌĆÖs only a matter of time before a fox, coyote, raccoon, hawk or even a neighborŌĆÖs dog runs across your free-range chickens and gets a free meal. Building a secure pen (or chicken run) is your best bet for keeping your chickens safe during the day, especially if no one is home. While most predators roam at night, plenty hunt during the day, especially at dawn and dusk. It takes only one predator, one time, to lose an entire flock.

However, confining your flock to a chicken run can be more dangerous, unless you ensure that itŌĆÖs predator-proof. At least in a free-range situation, chickens under attack can fly to a tree branch or hide under a bush or behind something in the yard. Locked in a run, they have nowhere to go if a predator breaches the penŌĆÖs perimeter. Building a sound and secure chicken run is critical.

When my husband and I moved to Maine from Virginia, I realized that in addition to the foxes and hawks that we mostly worried about in the South, we could now add coyotes, fisher cats, bears, minks, weasels and eagles to the predators that might come nosing around our chicken coop. We needed to take every precaution possible when building a pen for our birds. Of course, our chickens are locked in their coop at night, but they needed to be safe during the day in their run as well.

Depending on the type of predators causing concern, you might use chain-link, 1-inch welded wire or 1Ōüä2-inch welded wire for the fencing, or a combination. You should not use chicken wire. Despite its unfortunate name, chicken wire isnŌĆÖt really good for anything in the coop or chicken run. A raccoon, fox, mink or dog can rip right through it, and mice, snakes and weasel can slip through the holes. It also rusts fairly quickly. Chicken wire is best left for fencing in your garden or landscaping, separating two groups of chickens during the integration period or doing craft projects.

Our run measures about 16 by 40 feet, much larger than we needed for our mixed flock of two dozen chickens and ducks, but itŌĆÖs best to allow as much space for them as you can. However, you can adapt the following instructions for any size pen.

First, we measured how big we wanted the chicken run to be found a location. We laid down 2-by-4s to map out the size. We planned to allow 8 feet between the side supports to reduce the amount of cutting, as most boards come in 8-foot lengths. My husband used the tractor to scrape a trench around where the perimeter of the run would be so we could sink the fencing into the ground. Plan on the fencing going down 8 to 12 inches into the ground and curving outward a bit to keep predators from digging underneath. Alternatively, you can fill the trench with rocks or stones to prevent digging. Because we have lots of rocks in the soil, we did a combination of both.

Next, we marked off 8-foot lengths and dug holes for the fence posts. We then positioned a post in each hole, poured concrete mix and water in the holes, then refilled them with dirt and stomped on the dirt to really pack it into the holes. We temporarily attached pieces of scrap wood to support the posts until the concrete set and used a level to make sure the posts all stood straight.

Once the concrete had set, we screwed 16-foot 1-by-6s across the top of the run to further secure the posts and then removed the support boards. At this point, we ran a length of rope across the tops of the posts to make sure they were all the same height and used a hand saw to trim those that were a bit too tall.

It was then time to nail up the fencing. We started at the bottom with 1/2-inch welded wire. Using anything larger wonŌĆÖt keep out small predators such as snakes or mice, so for the bottom 3 feet, we chose 1/2-inch. We nailed the fencing to the posts with heavy-duty U-shaped nails.

Once we had the bottom roll of fencing on, we screwed 2-by-4s across at the midpoint, securing them to the fence posts. Then we got the top half of the side fencing nailed up and attached 2-by-4s along the top. For the top 3 feet, we used 1-inch welded wire, mostly as a cost consideration. Using 1/2-inch on the whole chicken run would be the most predator-proof choice, but because this is just a day run, the 1-inch is fine, less expensive and easier to cut and work with. It should keep out all predators except maybe a small weasel.

You can use 1-inch fencing for an entire chicken run, but to err on the side of caution, we instead used the 1Ōüä2-inch for the bottom. Raccoons will reach through fencing to try and pull chickens through, and while raccoons are not normally out during the day, it can happen. We used any leftover pieces of fencing in the trench, and we screwed 2-by-6s along the bottom to secure the fencing and finish off the bottom.

Next, we painted the exposed wood with exterior paint and cut and painted the 2-by-2s that we used for part of the top of the run. We planned a sort of pergola-style roof at each end of the chicken run for appearance. Plus, it keeps larger predators from climbing up the side and getting in, and it prevent hawks or eagles from flying in. It still allows in some sunlight, though, while being sturdy enough to hold up to Maine snowfall in winter. For extra predator-proofing, use 1-inch welded wire across the entire top of the run.

For the pergola top, we cut the ends of each 2-by-2 at an angle and then screwed them to the top support boards. We spaced them about 2 inches apart, using a scrap of 2-by-4, at each end of the run. In the center area, we used fencing across the top. Because we get a lot of snow in the winter and because the run needed extra supports in the middle, we used some birch trees that we had cut down earlier instead of lumber as center supports for the run.

Next, we built a solid roof over the part of the chicken run adjacent to the coop. This provides the chickens a sheltered area for when it rains or snows and a dry place for me to put their feed and dust bath. We built a wooden frame that attached to the side of the coop at one end and to the center support board at the other end and then screwed two sheets of plywood to the frame. We covered the plywood with a piece of plastic sheeting to keep it from rotting. We plan to shingle the roof in the future, but at the least for now, itŌĆÖs functional and keeps that area of the pen dry.

I left one section at the end of the run for last. It was time to install the door I had built using 2-by-4s and 1/2-inch welded wire. Using hinges, I fitted the door into the frame we had constructed. I also added a spring to the hinged side so the door would automatically swing shut behind me. For the latch, I used a spring-loaded eyehook to prevent the door being opened by a wily raccoon. Raccoons are notorious for sliding deadbolts, lifting latches and turning knobs. A spring-loaded eyehook or latch with a carabineer is the best type of latch for your run door.

It has been more than two years since we finished building our chicken run. In that time, other than a mouse digging underneath and popping up in the run looking for food and a raven hopping down into the run after perching on one of the pergola boards, the run has proven to be a safe place for our chickens to spend their days. HereŌĆÖs hoping your run will be as safe and sound for your flock.

There are several types of fencing options for coops and runs.