Chicken training? It's true—you can train chickens using positive reinforcement and positive punishment. Here's what that means and how you can get started. 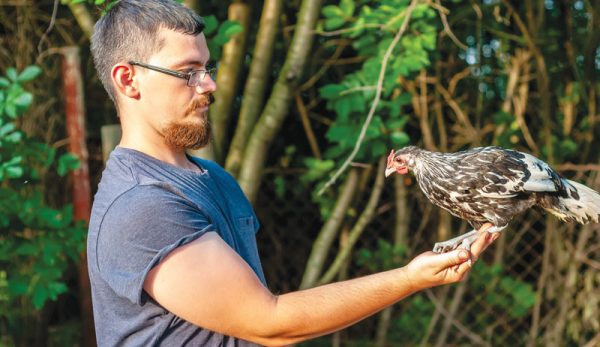 During chicken training, we are going to use positive reinforcement. It’s unlikely that a chicken would learn anything from negative reinforcement or negative punishment. More likely, she would just shake a tail feather and walk away.

Plus, we don’t want to train our chickens—or any animals—through punishment. Studies show that chickens have good memories and will avoid situations that they remember as negative or dangerous.

So positive training it is! This term is used rather broadly, so I’m going to break it down to relate to our chicken training.

Trainers use reinforcement to help increase the probability that a specific behavior will occur in the future by delivering or removing a stimulus immediately after the behavior.

More simply put, reinforcement, if done correctly, results in a behavior occurring again in the future. The reinforcement can be anything that the animal finds pleasing.

My chickens also find pieces of meat pleasing, and they will work for mealworms and graham cracker crumbs as well. They don’t find physical praise pleasing, so that would not be considered “positive reinforcement” for them.

Reinforcement can be positive or negative. Let’s take a closer look at both types of reinforcement.

Check out these 5 recipes for homemade chicken treats.

Positive reinforcement works by presenting a motivating/reinforcing stimulus to the chicken after she displays the desired behavior. It makes the behavior more likely to happen in the future.

She is more likely to display this behavior in the future.

Negative reinforcement occurs when a certain stimulus—usually an aversive stimulus—is removed after the animal displays a particular behavior.

An example of negative reinforcement is a horse that learns to “give,” or turn its head, to avoid the pressure on the bit in its mouth when the reins are pulled back.

Another example of negative reinforcement would be my husband building a new chicken coop to avoid listening to me asking him each weekend (just kidding, of course!).

When you hear about using punishment in training, you usually think of it as being something bad. But this is not always the case.

Trainers use punishment to help decrease the probability that a specific behavior will occur in the future. In other words, when a consequence immediately follows a behavior, it decreases the future frequency of that behavior.

Just like with reinforcement, there are two types of punishment: positive and negative.

This works by presenting an aversive consequence after an undesired behavior is exhibited. It makes the behavior less likely to happen in the future.

For example, my chicken remembers that when she walked across the driveway, it was extremely hot. The next time she approaches the driveway, she walks alongside it, on the grass.

Another example: A dog, wearing a shock collar, barked at the neighbor and received a shock.

You do this when a certain reinforcing stimulus is removed after a particular undesired behavior is exhibited. It results in the behavior happening less often in the future.

For example, my youngest son had an attitude before dinner. So he didn’t get ice cream after dinner.

If you’re ready to start training your chickens, check out my book: Click with Your Chick: A complete chicken training course using the clicker.

This article originally appeared in the January/February 2020 issue of Chickens magazine.

Giene Keyes is a certified professional dog trainer and the owner of Dog Face, an award-winning dog training school in Southern Wisconsin.