Chickens & Body Temperature: What You Need to Know

What is a chicken's normal body temperature? It varies, based on a number of internal and external factors. These basics will help you understand. 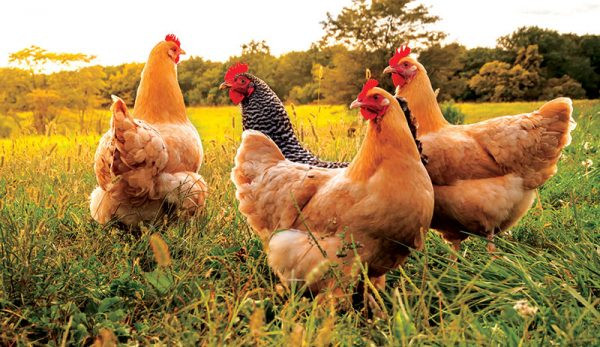 The average human being has an absolute body temperature of 98.6 degrees Fahrenheit. Chickens are different‚Äîeach bird has an internal temperature that varies greatly. The normal temperature of a chicken will depend on the ambient temperature as well as factors such as the chicken‚Äôs age, breed, gender, activity level and state of health.

A chicken‚Äôs temperature variability begins from the time the embryo starts developing within the egg. Largely because of moisture evaporation, the temperature inside an egg at the start of incubation is slightly below the incubator‚Äôs air temperature of about 100 degrees.

Halfway through development, the embryo produces metabolic heat that raises its temperature to slightly warmer than air temperature.

The general rule is that for the first week after hatching, chicks are comfortable at a brooding temperature of 90 degrees.

As chicks grow and their internal temperature increases, they need gradually less external heat to remain comfortable. Brooding temperature should be reduced approximately 5 degrees per week until the brooder temperature is the same as the ambient temperature or 70 degrees, whichever comes first.

Rather than using a thermometer, a more practical method of measuring brooding temperature is to monitor the chicks‚Äô body language. Chicks crowding close to the heat source and peeping shrilly are too cold. They might develop sticky bottoms or pile up and smother one another.

Chicks crowded away from the heater and panting are too hot. If the temperature rises enough to increase their body temperature above 117 degrees, chicks will die. Chicks that are evenly distributed under the heater during sleep, or distributed throughout a brooder while active, are perfectly comfortable.

During the first few weeks after hatching, a chick‚Äôs body temperature gradually increases until it reaches a stable 106 degrees, the average temperature of a mature chicken. At this point the chick‚Äôs developing metabolic processes let it start regulating its own temperature, which is why brooding temperature should be gradually decreased.

Exactly how long growing chicks need auxiliary heat depends on the ambient temperature, the number of birds in a given space and the breed‚Äôs growth rate. In warm weather, chicks might need heat¬Ýfor only three weeks or even less.¬ÝIn cold weather, they might need heat for six weeks, or until they grow enough feathers to regulate their own body temperature. Body language, again, is the key to gauging chick comfort.

The core, or deep body, temperature of a fully feathered chicken normally ranges between 105 and 107 degrees, averaging 106 degrees under normal circumstances.

Sometimes the upper limit is as high as 109 or even 113 degrees. The reason has to do with the increased growth rate of modern Cornish Cross broilers compared with a decade ago.

Their daily feed consumption has increased and so has their metabolic heat production. As a result, they are more susceptible to heat stress than other chickens.

The naturally high body temperature of chickens in general lets the birds self-regulate during seasonal temperature changes. When the temperature drops, a chicken‚Äôs body speeds up metabolism to keep the bird warm and active. Chickens therefore suffer less in cold weather than in hot weather and are less apt to die from cold stress, provided they have adequate nutrition and drinking water, and their housing is neither damp nor drafty.

In warm weather, a relatively high body temperature makes it easy for the chicken to release body heat into the surrounding air. When the bird inhales, its air sacs draw air deep into its body. Exhaling releases body heat, but only if the ambient temperature is lower than the chicken‚Äôs body temperature.

A chicken‚Äôs body typically operates most efficiently‚Äîthat is, requires little energy for temperature regulation‚Äîat environmental temperatures between 70 and 75 degrees. This temperature range is optimal for good health, active foraging and sound sleep.

At temps reaching 15 degrees above and below this range, a chicken stays comfortable through behavior modification. This still allows the chicken to maintain a comfortable body temperature without using a lot of energy.

A fully feathered chicken benefits from temperature fluctuations of as much as 15 degrees on either side of optimal, because the changes help the bird‚Äôs body acclimate to seasonal temperature changes.

Extreme temperatures, however, result in cold stress or heat stress, because they require a chicken to use energy that would otherwise go to maintaining health and productivity. A cold-stressed chicken covers its legs and shivers. Hens stop laying.

A chicken that can‚Äôt maintain its core temperature below about 115 degrees might die. A mature chicken that is acclimated to warm temperatures pants less readily and is less likely to die at what might otherwise be a lethal temperature.

The likelihood of a chicken dying from heat stress depends on many other factors, including the bird‚Äôs age and size, how rapidly the air temperature rises, how high it goes, how long the weather stays hot, and how humid the air is.

Factors that help chickens survive a hot spell include the birds‚Äô ability to get out of the sun, the presence of air circulation (if no breeze, then from a fan), and access to plenty of cool drinking water.

A chicken has no sweat glands, so it uses other ways to stay cool. Chickens from hot climates‚Äîsuch as Leghorns and other Mediterranean breeds, as well as the Fayoumi, which originated in Egypt‚Äîhave large combs and wattles, through which blood circulation increases in hot weather to help dissipate body heat.

Because feathers trap heat close to the body, another warm-climate adaptation is sparse body feathering and no feathers on the legs and feet.

Hens of any breed that are laying suffer more than those not laying.

Gail Damerow lives on a farm in Tennessee where she and her husband keep poultry and dairy goats, tend a sizable garden, and maintain a small orchard. Gail has authored more than a dozen books, including Storey‚Äôs Guide to Raising Chickens and The Backyard Homestead Guide to Raising Farm Animals. She blogs at gaildamerow.com.