Chickens Will Eat It All! (So Be Careful)

What will chickens eat? Honestly, just about anything, so be careful of the few things that can hurt your flock of precious birds. 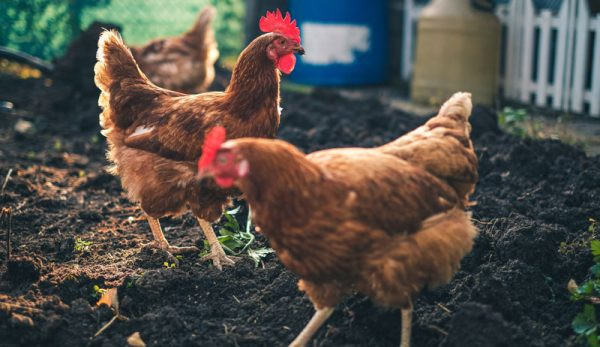 â€śNot again!â€ť My son Jaeson caught me red handed as I put a rubbery zucchini and the remains of last weekâ€™s cantaloupe into our kitchen compost crock. Itâ€™s not that he hates seeing food go to waste (I certainly do!). Rather, he laments that our elderly produceâ€™s final destination is not our compost heap but our chicken run.

Jaeson is actually quite correct in his observation, but not in the manner he intended. He grumpily meant that our chickens eat more of our groceries than we do. And heâ€™s somewhat right. Our flocks do indeed benefit from our kitchen scraps, stale bread, unwanted leftovers, and shriveled fruits and vegetables.

My interpretation of Jaesonâ€™s complaint, however, is that chickens do indeed eat better than a lot of humans, especially picky kids (aka Jaeson) who refuse to eat anything but pasta and pizza.

Chickens are omnivores that eat both plant matter and animal-based proteins. Theyâ€™ll spend hours foraging for insects. And theyâ€™ll gladly eat any frogs, mice and snakes they manage to catch.

Chickens also adore anything with seeds: melons, bell peppers, pumpkins, squash, cucumbers, you name it. Stone fruit is a particular favorite. My hens just seem to know when Iâ€™ve eaten all I can of a peach, plum or nectarine and will polish the rest of the fruit right off the pit.

The little rascals have also swiped peanut butter and jelly sandwiches and pizza slices right out of my sonsâ€™ unsuspecting hands. Lesson learned: Donâ€™t eat around the chickens unless you intend to share!

My birds are also rather fond of my holiday fruitcake, which is more than I can say for my immediate family. Chickens truly have remarkable palates!

Our birds are also very astute when it comes to recognizing where to find especially tasty treats. The moment one of our chickens sees us toting our kitchen crock in their direction, they sound the alert. Suddenly all of our birds dash out of their coops, gathering by the gates in anticipation of delectable delights.

We had to fence in our vegetable garden to keep the chooks from demolishing our salad greens, radishes, turnips, corn shoots and baby melons. I also discovered that the handful of Orpington hens that kept ranging into the woods weren’t being purposely dense. Theyâ€™d discovered the raspberry canes that thrive there.

Iâ€™ve also lost track of how many times Iâ€™ve shooed chickens (and turkeys!) off our deck railing, which provided them with convenient access to our wild-bird feeders and their yummy assortment of bird seed.

Despite their voracious appetite for everything, chickens should stay away from several human foodstuffs which are safe for us but can be troublesome or downright dangerous for them. These include:

While I may not be making a chocolate-avocado layer cake any time soon (neither my family nor my chickens will eat it), I do prepare potatoes frequently. And while he may grouse about our chickens getting lots of our leftovers, Jaeson has taken to eating his potatoes with peels on … his way of making sure our flocks stay safe.