Egg Eating Hens: Here’s How to Deal With Them

Identifying the culprit is only the first step in stopping the conduct of egg eating hens. Some say cull the bird, but I'm trying a different approach. 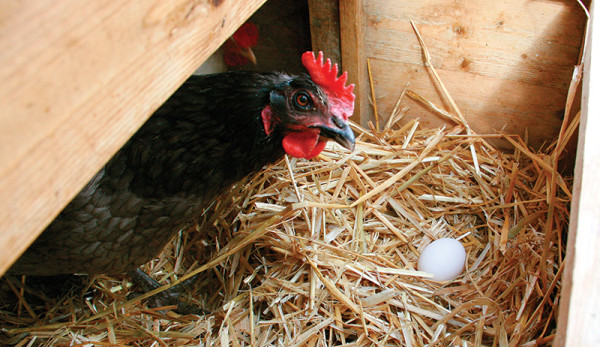 The telltale signs were hard to ignore. While the eggs collected from the ducks, Silkies and Ameraucanas were just fine, the ones from the main Orpington coop were not. At first it was just one egg coming in coated with sticky, dried yolk. In the course of a week, the number of affected eggs increased to two or three per day. A peek into the coop’s nestboxes one morning revealed messy, rich yellow stains sullying all three nestpads. I quickly tossed these onto our compost heap and replaced them with fresh pads but, the next morning, one of the new pads‚ÄĒand the three eggs in it‚ÄĒbore the same golden blotches. There was no longer any doubt: These are the signs of egg eating hens, and one of our birds was an egg eater.

Egg Eating Hens: The What and Why

In egg eating, the offending chicken pecks at an egg and then either eats the interior but not the shell or eats the entire egg, shell, yolk and all. Egg eating hens start this behavior for several reasons. Curiosity is one, especially in pullets and young hens. That oval thing that materializes seemingly out of nowhere? That definitely bears investigating. An egg accidentally crushed by a heavier bird such as a Brahma or English Orpington or by overcrowded conditions? Very intriguing. Layers that are deficient in calcium might begin eating eggs to boost their mineral levels, while birds of both genders that are lacking in protein might find exactly what their bodies need contained within that fragile shell.

Keep your flock free of egg eating hens that cut into your profit margin by taking steps to thwart this behavior in your henhouse. Collect eggs regularly throughout the day. If the eggs aren‚Äôt sitting unattended in a nestbox, they won‚Äôt catch the attention of a potential eater. Place a hopper filled with crushed oyster shell or limestone in your coop to keep your girls‚Äô calcium levels healthy‚ÄĒbut only if there are no chicks or juveniles who might ingest it, as an overly high calcium level can cause improper bone growth and kidney failure. Protein is vital at all times but especially during molting season, when it‚Äôs essential for feather regrowth. It‚Äôs also crucial for layers, who require it for egg production. Protein-filled treats such as sunflower kernels and dried mealworms as well as protein-rich supplements such as Calf Manna provide your flock with this key nutrient. Switching to a starter or game-bird feed, both of which contain higher percentages of protein than layer rations, is another option to consider.

Prevent accidental egg breakage by ensuring that you have enough nestboxes for your hens. One nestbox for every four girls is a good ratio and one that should keep your girls from all climbing into the same nestbox at the same time, potentially squashing the eggs already laid.

Make sure that your chicken-rearing practices don‚Äôt encourage your birds to become egg eating hens. Never dispose of cracked or pecked eggs by tossing them on the ground, where your chickens can feast on them and develop a taste for raw egg. Similarly, offering your flock their own eggshells as a source of calcium can have disastrous consequences. If you choose to offer eggshells, make absolutely certain that they have been thoroughly cleansed of membrane, yolk and albumen, baked until they are brittle, and crushed or ground until they no longer resemble egg shells.

Once you‚Äôve determined that you have an egg eater in your flock, your next move is identifying the perpetrator. You‚Äôd think that this would be easy: It‚Äôs the chicken with the yolk on her beak or the bits of shell on her feathers, right? Unfortunately this isn‚Äôt always the case: Egg eating commonly occurs early in the morning, often before we‚Äôve released the birds from their coop for the day. Those telltale traces often disappear by the time we open the pop door.

One way to catch a culprit is a nestbox camera. Available at wild-bird supply stores and sites, a nestbox cam mounts on the wall of your nestbox and records all activity occurring within. There are drawbacks, however. You‚Äôll need multiple cams if your coop features more than one nestbox; it won’t help at all if you’re recording the west box when eggs are being eaten in the east box. If your hens look alike, a nestbox cam will not help you identify your egg eater, because they’ll appear identical on the footage. Nestbox cams can also be a little pricey, especially the more compact models.

Lying in wait with the hope of catching the offender red handed‚ÄĒor golden beaked‚ÄĒwas the option my sons chose. As expected, it lasted all of three hours. Trying to stay out of sight of our curious Orpingtons proved too difficult for two adolescent boys. Checking the Orpington nestbox every half hour also guaranteed that no hen would lay an egg, much less eat one, amongst all that commotion.

Several mornings of meticulously examining every Orpington upon release yielded no clue as to the identity of my miscreant. It was time to outsmart the outlaw. I selected a freshly laid egg, then shook it to release the yolk from its casing. Using a yarn needle, I carefully pierced the egg on the rounded end as well as the point, gently wiggling the needle on the round side to widen the opening slightly. With a straw, I blew the contents of the egg out of the shell into a small bowl.

Using wax from a lit candle, I sealed the hole in the point. Next, using a tiny funnel, I filled the egg with light corn syrup colored a deep green using food dye. Once the egg was filled, I used wax to seal the top hole, then I lightly smeared a fine layer of blown egg yolk over the shell to mask the scent of wax and syrup.

When the shell was dry, I placed it in the leftmost nestbox in the Orpington coop, then waited for results.

That first day, I was almost foiled by Flapjack Orpington, who went broody and of course chose my egg to hunker down on. After two hours, I remembered that Flapjack‚Äôs heat might very well soften the wax covering the openings on the egg, so I quickly shooed the poor disgruntled hen out of the nestbox. No further action involving my trap egg occurred that day. The next day, it rained all day and the birds spent most of their waking hours huddled underneath their coop, glaring at the puddles developing in their run.

On the morning of the third day, I checked the coop nestboxes before releasing the Orpington flock and bingo! All that was left of my trap egg were a few teal-colored pine shavings. Not one piece of shell remained. There wasn‚Äôt even a sticky mess in the nestbox, as I had feared might happen with the corn syrup. I opened the pop door, inspecting each chicken trooping out. Every single bird walked by with a clean beak‚ÄĒ except the very last one. Lemon Cupcake stepped out of the coop, her beak and a few feathers tinted green. Our egg eater was caught at last!

An egg-eating habit is extremely difficult to break, and most experts recommend culling the offender as the only true way to stop this behavior. Lemon Cupcake, however, is my son Jaeson‚Äôs chicken, and he asked me to please not kill the hen he‚Äôd raised from an egg. I moved Lemon Cupcake from the main Orpington coop to the New Orpington coop, where she settled in after a brief pecking-order display from head girls Butters and Selene. Everything went fine for two days. On the third morning, the egg eater was back in action.

I‚Äôve now temporarily placed Lemon Cupcake with our Ancona duck flock; the ducks’ coop has a perch in it to accommodate unexpected overnight chicken guests. Because the Anconas bury their eggs, Lemon Cupcake will have a trickier time snacking. In the meantime, I‚Äôll ready our chicken tractor for spring. Lemon Cupcake and her friend, Big Boy, will move in once it‚Äôs ready. This way, the only eggs at stake are her own. I‚Äôll also try a couple of recommendations from the University of Florida in an attempt to break her of this behavior: offering her a dish of milk for several days to increase her calcium and protein intake, and offering her a highly peppered beaten egg. I‚Äôm keeping my fingers crossed that isolation from other hens, drinking milk and eating peppery eggs will do the trick. Otherwise, Jaeson will have to experience a sad segment of the cycle of life.