Chickens devour most any plant life, which is usually not good for growing. But setting them loose in your fall garden can help you winterize it. 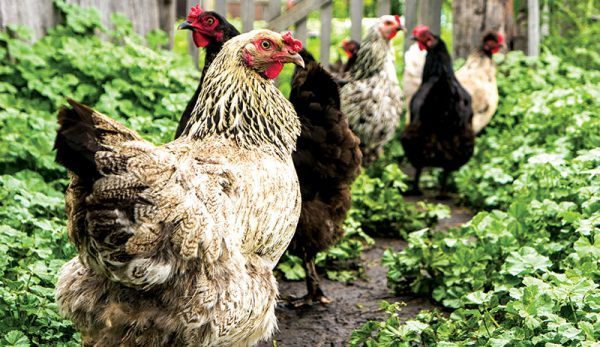 Chickens can be surprisingly helpful when itâ€™s time to winterize your garden.

Though not generally a good addition to a growing garden because they eat just about anything green, they can be valuable assets in fall.

Garden cleanup is healthy for them, too. They get to tidy spent vegetable plants and eat bad bugs and grubs. It’s also good exercise and mental stimulation for them to spread compost, aerate the soil and spread mulch to protect the ground overwinter.

Clean Up the Garden

Chickens eat growing green plants voraciously, and theyâ€™re no different when turned loose in a garden.

This is good for human as well as chicken if you let the birds in after harvesting to winterize your garden for you. A small flock will clean up all the spent vegetation and any unpicked vegetables.

If you plan to continue harvesting certain plants through winterâ€”such as carrots or kaleâ€”fence off those areas to protect them from the chickens. Or you can control your chickensâ€™ garden cleanup by using a chicken tractor and locating the chickens where you want them in your garden.

As far as chicken health benefits, studies show that eggs from pastured hens are better than those from most commercially raised hens.

Eggs from free-ranging hens across the country were sampled and compared with the USDA data for commercial eggs. Free-ranged eggs contained half the cholesterol, twice as many omega-3 fatty acids and greater levels of vitamins A and E.

So letting your chickens run free in the garden is good for them and their eggs. Just take care to protect them from predators such as hawks and certain plants.

Plants to Watch out For

Chickens can safely consume most garden vegetation in fall. However, they should not be allowed to eat rhubarb or plants from the nightshade family.

Common garden plants in the nightshade family include tomatoes, peppers, eggplant and potatoes. (Sweet potatoes, however, are not from the nightshade family.) These plants contain solanine, which can have serious health consequences if consumed by chickens, and should be pulled and removed from the garden before you let chickens in.

Also, the leaves of rhubarb are toxic and should not be consumed by chickens or humans. However, rhubarb is a perennial, so rather than removing the plants, fence them off from chickens.

Chickens are omnivores, meaning they eat plants as well as animals.

They are particularly fond of insects and eat bugs, grubs and larvae as they are scratching and pecking through the garden. By eating the larvae and grubs of â€śbadâ€ť insects that plan to overwinter in your garden (such as Colorado potato beetle larvae), chickens can significantly reduce the insect load in next yearâ€™s crops.

This reduces the number of insects that emerge in spring to eat your harvest. Chickens are great at organic pest reduction.

Once youâ€™ve cleared the garden of spent vegetation, add compost to help replenish nutrients in preparation for next yearâ€™s garden.

If you save and compost the soiled bedding material from the chicken coop, it makes terrific compost for the garden. Chicken droppings contain a lot of nitrogen, one of the main nutrients that needs to be replenished yearly in the garden.

But adding chicken droppings directly to a growing garden can burn plants because nitrogen levels are so great. By composting the old chicken litter from the coop and adding it when you winterize your garden in fall, you enrich the soil during the winter and let it mellow sufficiently by spring to be safe for planting.

In addition to supplying nitrogen-rich chicken litter for the garden, your chickens can help you spread the compost.

Just place piles of litter at regular intervals in your garden rows or beds and turn the chickens loose. They enthusiastically work through the compost and spread it out for you.

After the old vegetation is gone and compost has been spread, itâ€™s beneficial to add a thick protective layer of mulch to the garden.

Again, chickens are happy to spread the mulch. This can be grass clippings, chopped leaves or whatever mulch material you have. Just make sure the mulch material is free of pesticides or herbicides that you wouldnâ€™t want contaminating your homegrown garden produce.

This mulch layer is not intended to add nutrients back into the garden but simply to hold the soil in place and prevent weed seeds from germinating. In spring you can remove the mulch layer and immediately start planting.

Garden rows will have already been replenished with nutrients from the compost and should be nearly free of weeds because of the heavy mulch layer.

While your chickens eat your old garden plants and spread compost or mulch, they provide additional beneficial services, such as:

As chickens look for grubs and eat the old garden vegetation, they naturally aerate the garden soil and add nutrients with their droppings. Although their fresh droppings contain a lot of nitrogen and can burn plants, by adding them in fall the droppings diminish in potency over winter and provide increased plant fertility in spring.

Chickens also gently work the top few inches of soil as they scratch and improve the soil texture while introducing oxygen. This promotes optimal planting conditions when spring arrives.

Finally, as your chickens peck and scratch through your fall garden, they eat the weed seeds that they uncover.

This can significantly reduce the number of weeds that germinate in spring after the mulch layer has been removed. Of course, fewer weeds mean less work in the busy springtime garden.

Just by turning your chickens loose in the fall garden, you can put the vegetable garden to bed, protect it for winter and get a start on spring preparations with minimal work on your part.

It’s a healthy, nutritious activity. And the birds fully enjoy helping you winterize your garden at the end of each growing season.