How to Avoid Deficient Nutrients In Your Flock Of Chickens

Major differences in nutritional requirements exist for different types of poultry at different ages. Here's how to deliver the proper mix. 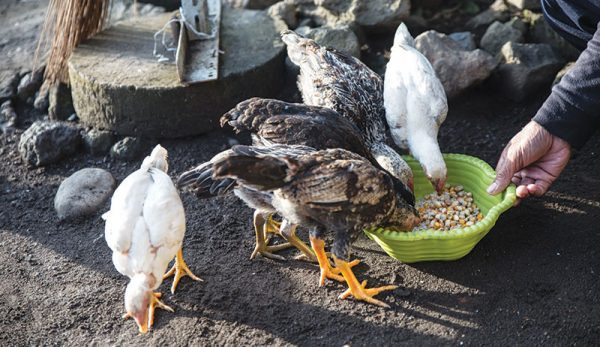 Proper nutrition is essential for any animal. Dietary requirements vary from one species to the next, but every animal needs nutrients to survive and thrive. In chickens, malnutrition can thwart growth, affect production and even result in death. Chickens need a balanced ration that includes vitamins, minerals, energy, carbohydrates, fat, proteins and water.

Feeding the wrong ration to the wrong type of poultry is often the cause of nutritional deficiencies, explains Sally Noll, a professor and extension poultry specialist for the University of Minnesota. The age of your chickens also dictates the type of feed and corresponding nutrients.

Nutritional deficiencies can be difficult to diagnose by a bird‚Äôs appearance. The birds tend to appear less healthy and be more prone to disease. Unspecific poor growth and poor feathering are other indicators of malnutrition that can be mistaken for other maladies, Noll says.

Noll and Emily Lhamon, an extension educator at Penn State, offer insight into key nutritional deficiencies, how they can affect a flock and tips for avoiding longer-term problems.

Detecting a nutritional deficiency can be difficult. The symptoms are vague, including poor growth in young birds, poor feathering and a general unhealthy appearance. All these signs can indicate numerous issues. By the time the indicators are obvious, it‚Äôs often too late the save the bird. The impact of malnutrition also varies by the age and purpose of the bird.

Improper nutrition is most dangerous for developing chicks because of their fast growth and low feed intake. Phosphorus, calcium and vitamin D3 are key nutrients needed for the skeletal growth of chickens.

‚ÄúIf you take hold of the bird‚Äôs beak and gently try to bend the beak and it bends, that‚Äôs an indication it has rickets,‚Äù Noll says. ‚ÄúThe same with legs. If the leg is rubbery under gentle pressure, the bird has insufficient calcium levels.‚Äù

It‚Äôs not contagious but can affect an entire flock if all the birds consume the same improperly balanced diet such as feed meant for older birds. If caught early enough, changing feed or supplementing the diet with free-choice limestone or oyster shell can improve the condition, as can supplementing drinking water with vitamin D.

‚ÄúGetting birds out into the sunlight can help, depending on the season,‚Äù Noll says. ‚ÄúSun exposure can provide some of the needed vitamin D.‚Äù

In severe cases, birds are described as ‚Äúwing walkers.‚Äù Their legs aren‚Äôt strong enough to support them so they use their wings to walk. When chickens reach this stage, it‚Äôs too late to reverse the damage.

In laying hens, too little calcium and vitamin D decrease egg production and create thin eggshells. Production chickens that are used to hatch chicks also need appropriate levels of vitamin D and other nutrients so the embryos within the eggs can form.

Vitamin E acts as an antioxidant and is absorbed from the intestine. It‚Äôs important for the integrity of cell membranes in the body. A deficiency of vitamin E affects many parts including the brain, reproductive system and blood vessels. Without the proper amounts of this vitamin, birds can develop encephalomalacia, also known as ‚Äúcrazy chick disease.‚Äù Affected birds are off-balance and fall over, as cells in the brain are affected. Blood-vessel walls become weak and hemorrhage. Once the damage is done, recovery is impossible.

Improper feed storage is often the culprit. Vitamin E is subject to oxidation. When feed is kept in a bucket that‚Äôs exposed to the sun or in an area with high humidity, the vitamin is destroyed.

People often forget that water is a nutrient, and it‚Äôs a critical one.

‚ÄúBirds can survive multiple days without feed, but they can‚Äôt survive a few hours without water,‚Äù says Emily Lhamon, an extension educator at Penn State.

Providing easy access to clean water year-round is critical. Unlike other animals, chickens can‚Äôt lick snow to stay hydrated. It‚Äôs equally important to provide cool water that hasn‚Äôt been overheated by the environment.

Fiber can be problematic for poultry, especially in high doses. Emily Lhamon, an extension educator at Penn State, shares a story of a family killing a flock of ducks by feeding too much high-fiber bread. Poultry species don‚Äôt process fiber as efficiently as other animals, so if you feed it to your birds, do it carefully.

Some flock owners mix their own feed because they want to supply organic and non-GMO products that can be difficult to find in stores. It can be incredibly tough to obtain an accurate blend of all essential amino acids that are crucial for young chicks. Lhamon adds that it‚Äôs often not as cost effective as people believe, once they buy the grains and the additional supplements needed to deliver the appropriate levels of vitamins and minerals.

Dilution of the feed with other ingredients can imbalance the prepared feed.

‚ÄúChickens really like cracked corn, and people throw it out because it‚Äôs fun to watch them eat it or because they want to decrease the cost of feeding‚Äù Noll says. ‚ÄúIt‚Äôs really good for energy, but it‚Äôs a terrible source for calcium, sodium and some vitamins.‚Äù

Noll recommends feeding cracked corn and other grains in moderation so that birds don‚Äôt fill up on the nutritionally incomplete food source. Instead, spread enough so that is cleaned up within 20 to 30 minutes.

Oats are another grain popular among flock owners who use it to dilute other grain sources. Oats are relatively high in protein levels as compared with corn but lack the needed vitamin and minerals.

‚ÄúYou might assume that because the birds are foraging that they are eating quite a bit and obtaining those from other sources, but you don‚Äôt know for sure,‚Äù she says.

Conversely, an overabundance of nutrients, minerals and fats can be as detrimental as malnutrition for your chickens. Vegetables, fruit and table snacks seem like a good idea because they offer a ‚Äúhealthy‚Äù addition and reduce waste but can also cause problems.

‚ÄúPeople think that because they like to eat fruits and vegetables, their chickens should, too,‚Äù Lhamon says.

However, she cautions chickens shouldn‚Äôt eat avocados, dried or raw beans including green beans, potatoes or tomatoes. Free-range chickens can quickly find trouble in the garden: Lettuce, spinach and leafy greens provided sparingly can be OK.

Chickens enjoy variety in their diets but are effective at finding treats or missing nutrients by scratching in the dirt for bugs and worms. Lhamon says to offer beetle larvae and mealworms only in moderation.

‚ÄúYou have to be really careful because feeding too much of either can cause round worms,‚Äù she says.

Feeding table scraps is another common practice that can lead to problems. Too many leftovers, as well as sunflower seeds or suet, can lead to fatty liver syndrome. Chickens are unable to digest fat well. Over time, fat deposits build up in the liver. As this happens, the liver becomes enlarged and the chicken hemorrhages, often when a hen strains to lay an egg.

An excess of vitamins and minerals from various supplements or the wrong type of feed can be dangerous. For instance, an egg-layer diet with high levels of calcium given to hens before they start egg production can tax the kidneys. Nutrient levels exceeding the birds‚Äô needs will be wasted and costly. Too much calcium in older birds can result in the same liver symptoms or extremely hard eggshells. The calcium must go somewhere, and it might manifest in the kidneys, liver and other organs that filter blood.

Right Diet for the Right Bird

Noll and Lhamon stress the importance of providing the right feed for the right lifestyle. Formulated feeds deliver the appropriate blend of nutrients for chickens at a specific stage of life. Give starter feeds to birds from hatch to about 6 to 8 weeks old. Options are available for young layers and young broilers. After the first two months, both can be transitioned to a feed formulated for laying and older meat birds.

Pelleted feeds are typically more wasteful than a mash or crumble because of the fines, or dust, associated with pelleting. Chick feed is a crumble because it‚Äôs the right digestive size for little birds. Pellets should be fed only to older birds that can handle large particles. Mash and crumble can be fed throughout the life cycle but can get compacted and moldy with high humidity or moisture.

You can maintain feed quality by storing it where it‚Äôs safe from dampness as well as rodents and insects. Airtight containers can prevent fat oxidation and feed spoilage, and it can also keep pests out.

A complete feed will support healthy development of young birds and the production stage of older birds. Says Noll: ‚ÄúProviding the right balance of energy, protein, minerals and vitamins from the start is key to avoiding myriad nutritional deficiencies.‚Äù