Chickens in Diapers: Keep House Chickens Without the Mess

Have you ever wanted a fancy house bird, like a parrot or cockatoo, but you don't have enough money to buy one? Then think chickens—house chickens! 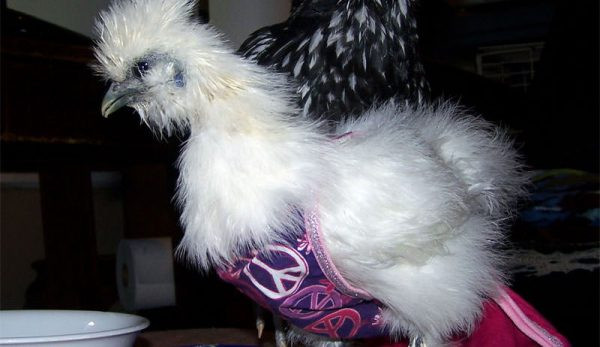 Have you ever wanted a fancy house bird, like a parrot or cockatoo, but you don’t have enough money to buy one? Then think chickens—house chickens! You can bring a feathered friend or two into your home.

Years ago my Mom wrote a book called Hobby Farms Chickens: Tending a Small-Scale Flock for Pleasure and Profit. While she was writing it she joined a fun and active YahooGroup called “housechickens,” where she met loads of folks who keep pet chickens in their homes. As one participant told Mom, “What the difference between a parrot and a chicken besides $3,000?” Makes sense to Uzzi and me!

You’re probably thinking, what about all that poop? Not to fear! It’s not as though chickens make poop the size of a cow pie, and you can diaper your chickens to avoid the mess.

Scores of inventive entrepreneurs offer a huge array of custom-made chicken diapers just for you and your birds. Visit your favorite search engine, enter “chicken diapers” and you’ll see. Or make your own chicken diapers using any of several patterns you can find online.

The queen of chicken diapers is a lady who Mom met through “housechickens” forum. She is Ruth Halderman, of Hot Springs, Ark., an analytical chemist and founder of ChickenDiapers.com. Ruth began making chicken diapers in 2002 when she moved to the country and adopted a pair of orphaned chicks. She quickly realized that un-diapered chickens running amok through the house was not a sanitary situation, so she whipped up some roomy cloth diapers with disposable liners and her business was born.

Any kind of chicken with a tail knob and stiff tail feathers can wear a diaper (rumpless breeds, like purebred Araucanas and Manx Rumpys, can’t). Low-slung chickens like Japanese bantams require special low-rider diapers that Ruth sells. Even chicks can wear diapers when they begin growing stiff tail feathers at roughly 4 weeks of age. Ruth crafts stretchy, adjustable diapers for chicks, but a typical chick grows through at least three different sizes before it reaches its full size.

An adult hen’s diaper usually needs changing every two to three hours, but disposable plastic liners mean you needn’t change the whole thing. Some people keep house chickens in comfy indoor cages at night and when they’re away from home, so diapering is a part-time thing.

Keeping in mind that the bigger the chicken, the more poop it generates, most house chickens tend to be smaller breeds, especially bantams, such as Silkies, Nankins and teensy Seramas, but most chickens of any size can wear chicken diapers.

Be sure to check local zoning laws before adopting house chickens and read the fine print. In some places, you can legally keep chickens outdoors but not in your home. And many zoning statutes say no roosters.

Adult chickens raised with other chickens are easily tamed and can make good pets; many house chickens move indoors as ill or injured members of backyard flocks and stay. However, starting with a baby chick or two usually works best. You can buy small numbers of chicks from breeders and at farm-store chick days, but an ideal place to purchase two or three healthy peeps, particularly of rare and heritage breeds, is My Pet Chicken, where you can also order everything, including diapers and poultry panties (diapers have disposable liners, panties don’t), you’ll need to raise and keep them.

Once you have your future house chicks, take them out of the brooder often and spend time holding them and stroking their heads and chests. When they get older, feed them tidbits and gently stroke their wattles; this is a surefire way to a pet chicken’s heart.

One reply on “Chickens in Diapers: Keep House Chickens Without the Mess”