Chickens in the Greenhouse? 4 Questions to Ask Before Making the Move

Could raising your layer hens alongside your tomato starts be an ideal combination on your farm? Ask yourself these four questions to find out. 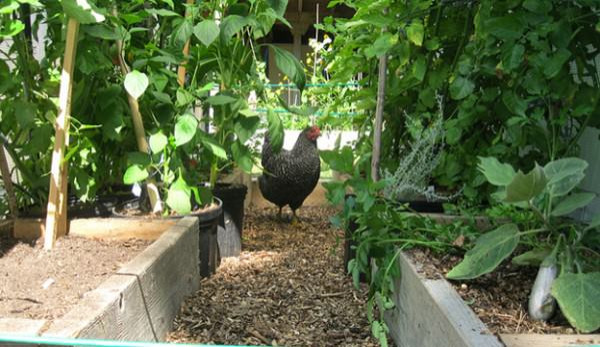 The idea ofÂ keeping chickens in aÂ greenhouse might seem far-fetched to farmers who value their tender crops, but you shouldn’t dismiss it out of hand. After all, chickens need shelter, which a greenhouse can provide, and plants can benefit from extra warmth released by bird bodiesâ€”not to mention the carbon dioxide/oxygen exchange between plants and animals that can benefit both. Over the years, Iâ€™ve spoken to farmers who have made the unlikely match of chicken and greenhouse. While this system might not be for everyone, here are four questions Iâ€™ve learned you should ask when making the decision for your farm.

1. Could My Chickens Solve a Disease Problem?

When the timing is right, chickens can eradicate some plant diseases from greenhouse soil.Â A market farm in Washington State that supplied herbs, fruits and vegetables to nearby restaurants and the local farmersâ€™ market, earned major income from heirloom tomatoes, and because summers in their location were rather cool, they grew the tomatoes inside a greenhouse. The tomatoes grew directly in the soil rather than in pots, allowing their roots to spread and the indeterminate vines to climb high.

One year, the plants developed a disease before the season ended, so the farmers gave some of their chickens free range of the greenhouse at the end of the season. Over the winter, the birds eagerly scratched up the soil and shredded tomato-plant residue, introducing new micro-organisms and providing soil aeration. The chickens were eventually removed and tomatoes planted in the soil againâ€”the disease had been completely eradicated.

Keep in mind, any time crops are planted directly into soil where chickens have been, their droppings must be completelyÂ composted before replanting. That timing depends on various factors, including ground temperature. Fresh chicken manure is very “hotâ€ť and can burn the roots of plants if not composted, and raw manure could introduceÂ pathogens to the food crop.

2. How Will I Protect My Plants?

Chickens can be excellent outdoor weeders, scratching around larger perennials with established toughened roots, such as shrubs andÂ raspberry canes (given the berries arenâ€™t ripe). They will leave these tough plants somewhat undisturbed, especially because they donâ€™t enjoy the taste. However, they arenâ€™t likely to be as kind to your delicate greenhouse plantsâ€”even if the plants arenâ€™t the chickensâ€™ dish of choice.

Chickens are programmed to spend much of the day scratching up soil and shredding smaller, more fragile plants in search of hidden bugs, tender young roots and other goodies. They will jump on tables to dig into potted plants, inadvertently knocking them over and triumphantly tearing through the newly discovered raw material in search of edibles. Consider how youâ€™ll erect barriers, such as chicken wire or framing, to corral chickens to the areas where scratching is acceptable.

3. How Will I Handle Chicken Manure?

Chickens donâ€™t have to touch greenhouse plants to destroy them.Â Chicken manure is high in ammonia, which could be detrimental to some plants, the chickens and you. While not all plants have the same degree of sensitivity to ammonia, air circulation, a balanced ratio of birds to plants, and a healthy composting system on the greenhouse floor need to be part of the overall system.

4. Will My Chickens Overheat?

If the maximum temperature of the greenhouse exceeds the chickensâ€™ heat tolerance, the two wonâ€™t make a good match. When temperatures begin grazing the 80s, you may notice chickens panting due to overheating, and they even run the risk of death. When outdoors in hot temperatures, chickens benefit from breezes, seek shade or dig into the cool ground for relief, but these are things a greenhouse may not be able to provide. However, with the certain precautions, you may be able to keep chickens in the greenhouse while attending to their safety.

One homesteader I met regularly puts chickens in his greenhouse each winter, using wooden frames and chicken wire to keep the chickens away from the growing plants. He surrounds his winter greenhouse with electronet fencing and deep mulch, allowing the chickens to free-range outside during the day, and brings them into the greenhouse to roost at night.