The New Kids on the Block: 4 Steps to Integrating New Chickens

Chickens are social animals with strict ranks, rules and codes of behavior. Follow these steps to safely introduce your juvenile birds to the rest of your flock. 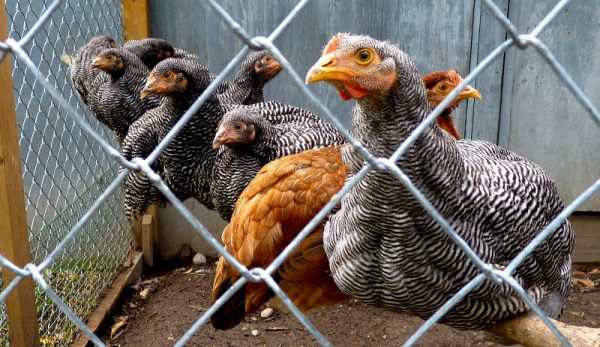 My friend Don once told me he had a foolproof way of merging his new spring chickens with the rest of his flock. â€śI wait until late at night, when everyoneâ€™s asleep,â€ť he explained, â€śand then I sneak the new birds onto the perch next to the older ones. When they all wake up in the morning, itâ€™s as if theyâ€™d always been together and just hadnâ€™t seen each other in a while.â€ť

Coincidentally, Don no longer raises chickens. His chickens squabbled and fought too much.

Over the years, Iâ€™ve often thought that if Don had introduced his juveniles more gently, heâ€™d be up to his ears in eggs today. Chickens are extremely social animals. Each bird in a flock has its own recognized rank, determined through a pecking order that at times can be vicious. The presence of statusless young birds in a flock’s midst invites the established chickens to attack these invadersâ€”and, if itâ€™s the early morning and the coop is still locked, the newcomer has no option for escape. Poultry keepers who introduce their juveniles overnight often discover the youngsters injured and cowering in a corner … or worse.

Seeing their babies battered and bleeding might well discourage some chicken owners from increasing their flock sizes. For others, a failed integration might lead to a series of separate coops and runs, one for each subsequent set of juveniles. However, space constraints, local ordinances and finances might limit this approach. Rather than risk wounds to our wallets or pullets, my husband and I use a stepped system of gradual accustomation to bring our young and more mature birds safely together.

To use this approach, you need a movable shelter of some sort. This can be a chicken tractor, a fenced pen covered with hardware mesh, even a big dog kennel or playpen covered with a tarp. We used a Superyardâ€”a sort of outdoor pen designed for domestic pets or young childrenâ€”covered with weighed-down ClosetMaid shelving for years. Anything that safely corrals your young birds, lets them see and be seen, and has enough space for its occupants (while being small enough to fit inside your chicken run) will work.

Step 1: Get Your Juveniles Used to Your Yard

For owners whose chicks have spent their lives in a brooder, this step is all important as it introduces young birds to a natural environment versus a wooden or cardboard container. Give them time to get accustomed their new surroundings but, every day, move the tractor to fresh ground a few feet closer to your older birdsâ€™ coop. The juvenilesâ€™ pen should eventually line up with your flockâ€™s run, allowing both sets of birds to freely see each other from their respective quarters.

Step 2: Get Your Juveniles Accustomed to Your Flock

Keep your youngstersâ€™ pen by your chicken run for several days to let the birds become accustomed to seeing each other. Be prepared for the older birds to stake out viewing space along the stretch of fence immediately facing the babies; theyâ€™ll be very curious about the new guys and will want to scope them out. On the flip side, the new birds might cower as far away from the fencing and the elder flock as possible. When each group of chickens finally ignores the other and resumes its own business, itâ€™s time for the next step.

Step 3: Get Your Juveniles Used to Your Run

Once your birds are accustomed to the sight of each other, itâ€™s time to move the juvenilesâ€™ tractor into your run. Position the youngsters as far as possible from the entrance to the coop, as the older chickens will probably feel territorial about their home. The older birds might once again stake out viewing spots near the tractor, and the juveniles might once again cower away from them. That said, each group will again eventually feel comfortable with the other’s presence and return to normal activities.

Step 4: Get Your Juveniles Used to Roaming

When both sets of birds have grown so accustomed to each other that they pretty much ignore each other, itâ€™s time to let them looseâ€”but only during the day. Each morning, release the younger birds five to 10 minutes before releasing the older ones. This gives them some time to explore the new playground. Leave the tractor open so the youngsters have access to their own food and water, as well as a refuge in case an adult decides to give them grief. Once itâ€™s dusk, round up the young birds and close them up in their tractor for the night. Continue to do this every day; gathering the birds might become a little more labor intensive as the newcomers begin to intermingle more with the elders. One evening, you will go to lock up and find thereâ€™s nobody to put in the tractor: Your young birds will have filed into the coop with their new friends, fully integrated into your flock.