Chickens were the first livestock for this farmer and author who runs a six-acre farm in Jackson, New York, that also includes vegetables, bees and horses. 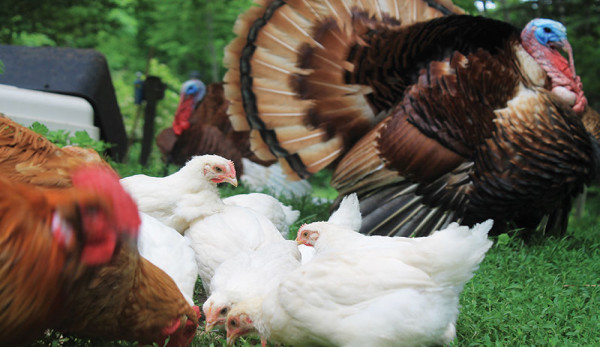 As a self-taught farmer having lived in three states on three farms over 10 years, tending to animals and following her dreams of sustainability, Woginrich has persevered. In that decade, chickens have been at the very heart of each step of her journey and every hardship that has come her way. She has chosen rural regions over urban ones to settle and work, each place with the flock in mind. Chickens were her first livestock.

‚ÄúThey came into my life and never left, which sounds simple, but it means a lifetime of decisions that accommodated them being a part of my story,‚Äù she says.

In her first book, Made From Scratch (2010), Woginrich calls chickens ‚Äúthe most exciting backyard accessory since lawn darts.‚Äù She credits her spark of infatuation with the birds to her then coworker and chicken mentor.

‚Äú[She] managed a full-time office job and kept a herd of beef cattle and 200-plus laying hens,‚Äù Woginrich says. ‚ÄúShe rocked my world. I had grown up in a town and never even knew chickens came in different breeds and colors, much less people in cubicles could go home to them. I was blissfully ignorant and excited.‚Äù

Woginrich‚Äôs first flock of three mature hens came from her former coworker‚Äôs farm, after a few trials and tribulations with her attempted starter flock: one involving five Silkie chicks in a brooder and a curious Siberian Husky; another when a few hens refused to lay; and another when a hen wandered off on her first morning, not to be seen again. Even with the initial setbacks, Woginrich persisted, and before long she had laying birds.

‚ÄúThose first birds laid eggs in a coop on the back deck of my rented home,‚Äù she says. ‚ÄúIt was butted up against the window, so I could open the kitchen window in my slippers and reach into the coop through a backdoor and get eggs 10 feet from the skillet. I never felt so rich. Those first birds were the hit I needed to always have a flock of layers.‚Äù

Woginrich eventually got her Silkies, too, and added a point-of-lay pullet to her first small flock. By her first summer with chickens, Woginrich was flush with more than a dozen eggs per week.

‚ÄúBefore chickens, the only animals I had were pets,‚Äù she says. ‚ÄúThey showed me a new partnership with animals, a very old one that has become lost to too many. I know some people keep pet hens‚Äînothing wrong with that‚Äîbut I loved knowing that I had these animals that were not pets [but] were partners. They could create something of worth to sell‚Äîeggs and meat‚Äîand if I learned to live beside them well [and] breed, raise and keep them well, I would always have a small source of income and food. It was my first taste of self-sufficiency.‚Äù

These days, chickens feel less sentimental to her than they used to, but they are no less critical to the heartbeat of the organism that is Cold Antler Farm, her homestead in Jackson, New York.

‚ÄúA body is made of arteries pumping blood from the heart to every nook and cranny of your being,‚Äù Woginrich says. ‚ÄúChickens are that bloodstream here. They are what courses through the fields, yard, fence lines and nesting boxes. They are always there, proving this farm is a living thing.‚Äù

Some chicken keepers tend a laying flock strictly for eggs; others begin with laying hens, and evolve along a natural progression to raising chickens for meat. Over the years of her farm‚Äôs life (in its many incarnations and locations) and her extensive social media presence, Woginrich has received criticism and support from her stance on eating animals. Her perspective, as it does for most who farm the land, comes from a place unique only to those who breed, birth, care for and process their own animals for meat. Woginrich hasn‚Äôt missed a beat in addressing her critic‚Äôs concerns and challenges, asking meatless readers to explore the sources and consequences of their plant-based diets.

In her frank and controversial Huffington Post opinion piece ‚ÄúIf You Care About Farm Animals: Eat Them,‚Äù Woginrich shares her experience of being a vegan and vegetarian over the course of 10 years to raising her own animals for meat as well as hunting wild game. In a more recent piece for Huffington Post, ‚ÄúAn Open Letter from a Farmer to Angry Vegetarians,‚Äù Woginrich gracefully addresses the emotional feedback she receives from those who initially met her as a vegetarian and ‚Äúfarm-curious‚Äù budding homesteader in her first book and who were angered to find just seven years later that she was now processing lambs, hogs and, of course, chickens, on her six-acre farm.

In her early farming years, Woginrich was still making the shift from viewing animals as companions to ‚Äúemployees,‚Äù as she calls her charges. As a vegetarian, and a person who was not raised on a farm in her formative years, animals were either pets or creatures of the wild. Where did farm animals fit in? What was their role? To the young Woginrich, they were colleagues with an agreement and understanding: care, food, shelter and a wonderful life, in exchange for meat, milk, fiber or eggs. She was shifting her perspective of animals in our world‚Äîin her world‚Äîand what her relationship with them was to be.

This shift from her early days as a blogger and author forced a choice among her readership: Accept that people can change and hang on for the ride, or, hop off and move on. As a very public farmer, one entrenched in the language and culture of social media by choice and career, harsh criticism came with the territory. Woginrich continues to stand her ground and address concerns on the very platforms that were used to challenge her. In fact, this is part of her draw. Her readership fervently follows her because she lives in an authentic way and doesn‚Äôt just share fluff: She shares her setbacks and failures, as well as her accomplishments.

On the farm today, chickens provide pest services, fertilization and income for the farm, but ‚Äúthey are also in the freezer‚Äîfood for cold winter nights and gatherings with friends‚Äîand in the freezers of people who support this farm. Their eggs are part of people‚Äôs every morning routine and there is nothing but pride in feeding your community good food. Chickens are so small, but they really can be the foundation of a rural life.‚Äù

Not long into her chicken journey, Woginrich entered two black Silkies into a poultry show at the county fair. On her various literary platforms, the farmer has shared this pivotal moment in her agricultural life, and how it shifted her perspective‚Äîand her life‚Äôs timeline‚Äîfrom what she thought it was going to be. Her Silkie rooster won a ribbon that day, and she marveled at the community that existed around chickens and how quickly she was welcomed into it with open arms.

Today, Woginrich can‚Äôt imagine her farm without chickens. Their roles are so important and so loved on the farm. ‚ÄúThey are the background characters in every scene of my life,‚Äù she says. From once bathing her birds in a kitchen sink with dish detergent (and subsequently blow-drying them to perfection), her evolution with chickens has shifted, but her devotion to them has not.

She has now turned her fowl focus toward breeding and refining a unique mix of breeds she calls ‚ÄúAntlerborns.‚Äù Her crosses of Ameraucana, Pumpkin Hulsey, Swedish Flower Hen and Jungle Fowl produce clever birds that are apt to survive and thrive.

‚ÄúMy birds are all free-range, and while that does mean losses to some predators, I feel the overall quality of life for the flock is better,‚Äù Woginrich says. The ones that survive go on to share their genes, and her line strengthens and improves.

‚Äú[It is] natural selection right in my own backyard, and [the Antlerborns] are fierce mothers and amazing flyers,‚Äù she says. ‚ÄúThey lay blue/green eggs, and some don‚Äôt have tail feathers. So I went from raising a kennel of purebreds that I would enter in the county fair to a breeding ground for the scrappiest northeast laying flock no raccoon or fox dare vanquish!‚Äù

Woginrich‚Äôs goal is to improve the genetics of the line, keep them going strong and increase her meat bird production. Otherwise, she ‚Äúlets chickens be chickens.‚Äù Her daily routine is like any backyard or hobby farmer: Each morning, she feeds them, collects eggs and conducts health checks. The rest of the time, their presence courses through the veins of the farm, keeping the land healthy and feeding their farmer and her customers.

‚ÄúI wrote books about them and shared their stories, and now they are as much a part of me and this farm as the ground itself,‚Äù she says. ‚ÄúIt is amazing to me that a decade of choices can come from one hot egg.‚Äù

This story originally appeared in the September/October 2017 issue of¬ÝChickens¬Ýmagazine.

Kristina Mercedes Urquhart is the author of The Suburban Chicken: The Guide to Keeping Healthy, Thriving Chickens in Your Backyard (i5 Press, 2015) and the columnist of Chickens magazine's ‚ÄúFowl Language.‚Äù She lives with her husband, menagerie of animals, and two daughters in Asheville, N.C.