From the Rhode Island Red to Iowa Blue to Jersey Giant, these chickens were made in the US of A and bear their state of origin right in the name! 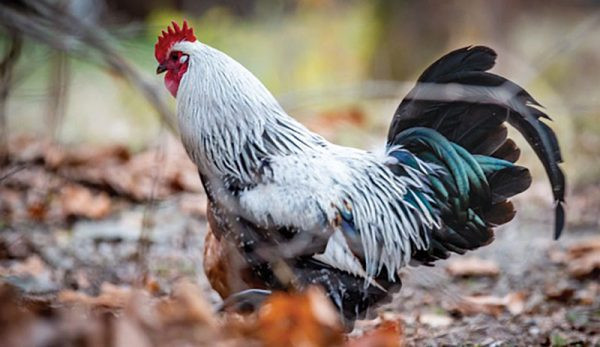 Hereâ€™s a look at each of the chicken breeds named after their state of origin.

Nettie Metcalf of Warren, Ohio, developed the Buckeye as a dual-purpose farmstead chicken that adapts well to cold weather. Itâ€™s the only breed classified as American that has a pea comb, a feature that helps it survive Ohioâ€™s bitter winter weather.

When this breed was developed during the late 1800s, it was originally called Pea Comb Rhode Island Red. But that name did not enhance the breedâ€™s popularity. So, since it originated in the Buckeye State, the breed name was changed to Buckeye.

Buckeye chickens come in large and bantam sizes and a single color: a rich reddish brown of about the same shade as a buckeye nut. The hens lay eggs with brown shells and also brood easily.

Although the buckeye tree is the Ohioâ€™s official state tree, the state bird is the Cardinal. Ohio has no official state chicken. You can find more information on this breed on the website maintained by the American Buckeye Poultry Club.

Read more: Looking for something new? Check out these 20 chicken breeds!

Ironically, crossbreeding was considered to be heresy at that time. The Oregon legislature even debated eliminating the collegeâ€™s poultry department.

Upon retiring, Dryden moved to Modesto, California, where his son Horace continued a similar breeding program that eventually led to the development of a new breed. Called the California Gray, its introduction to the public came in 1949.

The California Gray is known for its gentle temperament and outstanding egg production. Now quite rare, this breed is also used primarily to produce California White hybrid layers.

California has no state chicken. The state bird is the California quail.

The Delaware breed was developed in the 1940s from silver sports arising from hybrid broilers created by crossing barred Plymouth Rock cocks with New Hampshire hens. George Ellis, owner of the Indian River Hatchery in Ocean View, Delaware, collected some of these sports to breed back to New Hampshire hens.

At some point, Ellis selected a superior silver sport rooster called Superman to develop a dual-purpose breed called the Delaware, having the sportâ€™s color patternâ€”white plumage set off by slight barring in the neck, wing and tail feathers. The Delaware has a single comb, comes in a single color pattern and may be large or bantam.

Although not an American Poultry Association-recognized breed, the Blue Hen Chicken is the official state bird of Delaware. It originated with a game hen dating to Colonial days that noted for her steel-blue feathers and the ferocity of her male offspring.

Besides being the official state bird, the Blue Hen is also the official mascot of the University of Delaware. In the 1960s, the university obtained six pairs identified as Delaware Blue Hen Chickens. They were crossed with blue Andalusians, creating a flock that looks more Mediterranean than game.

Read more: Tiffani Thiessen (Saved by the Bell; Beverly Hills, 90210) keeps chickens, too! Take a tour of her homestead.

The Iowa Blue originated in the 1920s with John Logsdon of Decorah, Iowa. The breed’s fame derives from its ability to withstand Iowaâ€™s typical hot, humid summers and cold, dry winters.

By the late 1980s, the last remaining viable flock of Iowa Blues belonged to Ransome Bolson of Decorah, who obtained his starter flock from Logsdonâ€™s wife, Dolly.

From that flock, the Iowa Blue returned from the brink of extinction via the work of a group of enthusiasts. They eventually formed the Iowa Blue Chicken Club, which offers a highly detailed downloadable PDF called History and Characteristics of the Iowa Blue.

The original color of the Iowa Blue is not blue, but rather a pattern called silver penciled. More recently, a birchen variety has also been developed.

Iowa Blues are excellent foragers and good at outsmarting predators. Hens lay eggs with pale brown shells, will brood and make protective mothers. This breed has no bantam counterpart.

The official Iowa state bird is the Eastern Goldfinch. Iowa has no state chicken.

Brothers John and Thomas Black of Jobstown, New Jersey, developed the Jersey Giant in the late 1800s as an alternative roaster to the turkey. Itâ€™s the heaviest known chicken breedâ€”hens mature to 10 pounds; cocks, 13.

Raising Jersey Giants for meat production turned out to be uneconomical as the chickens take too long to grow. They remain popular for their imposing size, calm disposition and cold-hardiness.

The Jersey Giant has a single comb, may be large or bantam, and comes in a few color varieties, of which black and white are the most common. The hens are good layers of brown-shell eggs and make wonderful broodies, although their eggs may take a day or two longer to hatch than those of other breeds. For more info, visit the National Jersey Giants Clubâ€™s website.

New Jersey has no state chicken. The official state bird is the Goldfinch.

Brothers Oliver, Austin and Leslie Hubbard of Walpole, New Hampshire, created this dual-purpose breed in the early 1900s, through the selective breeding of Rhode Island Reds. They sought to improve the breedâ€™s disease resistance, cold hardiness, rate of growth and degree of muscling for the early broiler industry.

New Hamps have a single comb, may be large or bantam, and come in one color varietyâ€”a light reddish bay. The hens lay a decent number of eggs with brown shells and may brood (and when they do, they make great mothers).

This breed is the official state poultry of New Hampshire. The New Hampshire Breeders Club of America maintains a private group on Facebook.

The Rhode Island Red was developed in the late 1800s by various farmers in Massachusetts and Rhode Island as a dual-purpose egg and meat chicken. Some strains have since been bred more for egg production than for meat.

The official Rhode Island state bird, this breed has two comb varieties (single and rose), comes in one color (a rich mahogany red with a black tail) and may be large or bantam. The breed is championed by the Rhode Island Red Club of America.