How & Why Chickens Make Double-Yolk Eggs

Hens' insides sometimes make mistakes, resulting in double- or even triple-yolk eggs. Here's how it happens and some associated egg myths and legends. 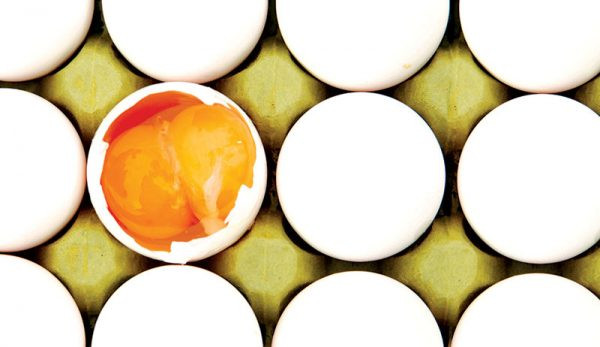 Collecting the day‚Äôs fresh eggs from nest boxes is one of the greatest pleasures of keeping backyard chickens. Each day, hens can be heard kicking up a fuss as they lay their eggs. What a delight it is to enjoy the harvest of their work, not to mention that of the chicken keeper.

Occasionally, one will discover an oversized egg in the nest box‚Äîoffering an opportunity to revel in the entire egg-laying process along with the wonder of finding a double or sometimes triple yolk inside.

From the Inside Out

Each hen has two ovaries; however, she really uses only one of them for egg production. The ovary looks like a small cluster of grapes and represents all of the eggs or ova (yolks) that she will lay during her reproductive life. It takes 25 hours for the hen‚Äôs body to produce one egg. The ova grow one at a time until they are the size of a yolk when they detach from the ovary and travel down the oviduct. Most of the time, the hen‚Äôs ovary releases one single yolk into the oviduct where it begins its journey through her body.

During the first three hours in the oviduct, the yolk collects the internal membranes that make up the egg‚Äôs interior including about half of the egg white. At the same time, the part of the egg called the chalazae forms. This is what looks to the human eye like a white cord inside the egg. If the egg is fertilized, the chalazae‚Äôs function is to serve as a centering strand for the yolk, keeping it in the middle of the egg white during incubation.

The calcium carbonate in eggshells grows in columns around the edges of the egg white; this is similar to bone and seashell development. These columns stack side by side as they grow, eventually forming overlay patterns that complete the shell around the egg. The calcium carbonate along with the yolk, white and internal membranes of the shell give the egg its shape and size.

The egg moves into the hen‚Äôs uterus or shell gland where it accumulates more calcium from the hen. It takes about 2 grams of calcium to complete the eggshell. The hen‚Äôs rib and leg bones loan the calcium to the eggshell because the hen can‚Äôt consume enough calcium to keep up with egg production. During the winter months‚Äîwhen daylight is shorter‚Äîthe hen‚Äôs laying slows. This is a time when her body rebuilds the calcium to be borrowed again the next spring and summer.

The egg travels small-end first through the shell gland until it meets the connection point of the cloacae and vagina. Here the tract is very flexible essentially turning itself inside out so that the vent is exposed and the egg is laid large-end first. This also keeps the egg clear of the hen‚Äôs feces during the laying process.

About an hour after a hen lays her daily egg, her body keeps the production line moving by releasing another yolk into the oviduct. However, young layers, hormonal imbalances or overstimulated ovaries sometimes misfire and release the next yolk too soon. That results in two yolks being wrapped together in the process of moving through the oviduct at the same time.

Double- or triple-yolk eggs are more common in young birds (found in pullets between 20 and 28 weeks of age), while in some breeds they can be genetic‚Äîparticularly heavier breed hens. Double-yolk eggs occur in about 1 of every 1,000 eggs. (Mathematically speaking, this means that keeping four hens that average ~125 eggs each a year over a two-year period might result in a single double-yolk egg.) If both yolks are fertilized, they generally don‚Äôt hatch because of insufficient space for development. Hens that lay double-yolk eggs can be prone to becoming egg-bound or suffer from vent prolapse, both of which can be fatal.

Many cultures have hatched their own superstitions when it comes to eggs.

At one time, double-yolk eggs that were discovered during candling were pulled from being sold because they were considered defective. Today, as ideas around cholesterol have changed, double-yolk eggs have become more acceptable. They provide a double shot of protein. Some cultures value double-yolk eggs; they are highly sought after in regions of China. There, hens are bred to be double-yolk egg producers.

Ancient cultures considered double-yolk eggs to be a sign of fertility. When a pregnant woman cracked open a double-yolk egg, it could signify that she‚Äôs expecting a baby or perhaps even twins in some cultures.

To many, double-yolk eggs are considered a sign of good luck or good fortune. In Europe, eggs were used for fortune telling; their interiors indicating good as well as bad omens to come for the individual.

Fresh eggs were often broken over European farm fields to encourage a good harvest, and eggshells were turned into fields to create good crop growth. (Some gardeners today put eggshells in the hole with young tomato plants to add calcium for growth.) Legend has it that a broken eggshell should be smashed so that a witch can‚Äôt build a boat and set sail in the pieces, causing a bad storm.

Influenced by the increasing daylight, a hen‚Äôs reproductive system is constantly in motion. Ova or yolks are developing and detaching from the ovary, as they move through the oviduct they collect the egg white and key membranes that hold the egg together on the inside. Eventually, the eggshell encases the entire egg (or in the case of a misfire, two yolks at one time) and the hen lays her egg.

In a small flock it can be difficult to determine who has laid the large and beautiful double-yolk egg in your nest box, but the pleasure of cracking open the egg to find a double yolk adds to the overall joy of keeping your own backyard flock.