Use Wood Chips to Make a Chicken Scratch & Snack Bar

Chickens get snacks in the form of bugs that eat wood chips, and you eventually get compost from the wood chips and chicken poop. 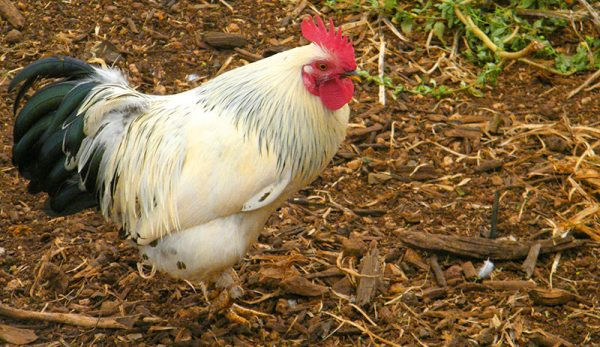 Do chickens have jobs? Perhaps most of us think of egg laying as their job. But from a chickenâ€™s perspective, the birdâ€™s main occupation is to scratch up the ground in a daylong foraging search for tasty food such as bugs, grubs, greens and seeds. All day long, itâ€™s scratch-scratch-peck, scratch-scratch-peck. So anything we can do to generate more of those tasty morsels will not only please our hens but also trim our chicken feed expenses.

Now I donâ€™t mind paying extra for organic chicken feed. But Iâ€™m always glad to find natural free sources of food for my hungry chickens. I especially like when that free food has other benefits.

A perfect example of saving money while boosting the foraging success rate of our chickens comes from throwing down a thick layer of wood chips in our chicken run.

Of course, the hens donâ€™t eat the wood chips. But they do consume the soil-based critters that eat the wood chips: roly-polys, springtails and earthworms. Because chickens love to scratch the ground and devour whatever they find, I call this layer the â€śscratch and snack bar.â€ť

To create this chicken-run snack bar, I spread a 6- to 8-inch layer of wood chips in the run two to three times a year. This has several advantages.

There is a key requirement for this to work: The run must remain open to the rain. If you have a roof over your chicken run, there wonâ€™t be enough moisture for the wood to decompose or to attract earthworms or insects. The chicken poop wonâ€™t break down either; youâ€™ll have to scoop it up. Thatâ€™s like having a toilet that wonâ€™t flush. Itâ€™s worthwhileâ€”and much cheaperâ€”to build a run without a roof, just make sure you cover the run with chicken wire to keep out aerial predators.

Anyone should be able to get free wood chips from a local tree-trimming company. After these workers cut branches, they run them through a large, noisy, gas-powered chipper/
shredder. The companies do that for two reasons: to make it easier to get a mountain of branches to fit into a dump truck and to reduce those branches to a form thatâ€™s easy to discard.

You, as a chicken keeper, must only look up the local tree trimmers or arborists in your area, then ask them to put you on the list to dump one or more truckloads of wood chips on your property. Many companies are happy to oblige because dumping on your property for free is a better deal than paying to dump the chips at a landfill.

Once you have received your wood chips, follow these bits of advice.

A colleague, Tradd Cotter, has had two local journalists visit his chickens. Both claim that his was the first chicken run that didnâ€™t stink.

His secret was mushroomsâ€”that and a layer of free hardwood chips applied periodically to his chicken run. Tradd uses king stropharia (Stropharia rugos-annulata) mushroom spore, added to the hardwood chips (not pine chips) to break down the chicken poop. Also called wine capsâ€”because they are edible and taste greatâ€”they grow easily on wood chips and have the unique ability to quickly break down E. coli.

Traddâ€™s chicken run is never muddy, dusty or smelly. The E. coli doesnâ€™t hurt the mushrooms, which the chickens donâ€™t like to eat. So Traddâ€”and his wife and business partner Olgaâ€”get edible mushrooms as well as a clean chicken run.

Tradd makes his living from selling mushroom spores and wrote Organic Mushroom Farming and Mycoremediation. He knows what heâ€™s talking about.

Readers can buy wine-cap spores from him at his website, www.mushroommountain.com. His book contains detailed instructions on growing wine-cap mushrooms on wood chips in the run or even on wood chips used as mulch in the garden.