Chickens: Where It All Began

For this couple, when it comes to farming, chickens just scratched the surface. 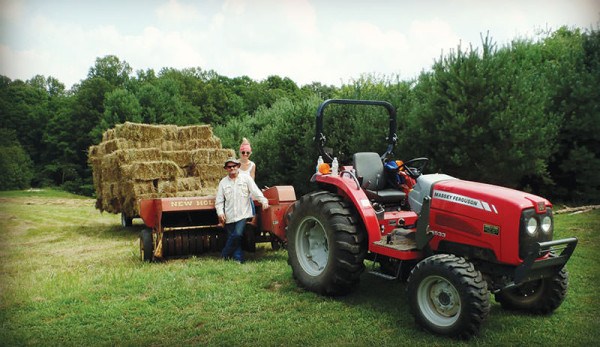 I warn people when I see them smiling into the brooder tanks of chicks at my local farm store: â€śChickens are a gateway drug to farm life.â€ť

It was chickens that got me hooked on that life 5 years ago when I founded Dickie Bird Farm. Since then, my farm has flourished. Today, the list of livestock includes chickens, turkey, game birds and goats. I also grow a half-acre of vegetables; tend a miniature orchard of fruit, berries and nuts; operate a goat micro-dairy; and make my own fresh chĂ¨vre and goatâ€™s milk soap.

But before I get ahead of myself, letâ€™s go back to where it all began: chickens.

My husband, Kipp, and I found our farm nestled in the hills of southern Ohio. The house wasnâ€™t much to look at, but the big red barn was a beauty. It was built in the late 1800s from American chestnut timber, before blight wiped that native tree out of the northeastern U.S. and was crafted in traditional gambrel style with a two-level hayloft.

When we bought the place, the barn was empty but full of potential. Our first project was to convert a section of it into a chicken coop. We picked our chicks out of a mail-orderÂ catalog, and 25 Silver-Laced Wyandottes arrived two weeks later.

Wyandottes are reputed by many to be docile, cold-hardy and prolific at egg-laying. Our goal for raising poultry was self-sufficiency, and we thought dual-purpose SLWs would provide us with meat and eggs. The breed lived up to its reputation for laying a bounty of big, beautiful brown eggs, but we were disappointed in the meat.

Our first flock taught us that broiler breeds are superior meat birds, and that dual-purpose
birds are best used as stew birds and stock. Our second flock was a combination of Cornish Rocks for meat, and Welsummers, Buff Orpingtons and Australorps for eggs.

The following year, we raised turkeys for Thanksgiving and welcomed our first goats, and I began teaching backyard poultry classes to my community through the county extension office. I was excited and encouraged that half of class participants were, like me, millennials interested in growing and raising their own food. I had a lot of free-range experience to share, and I forged new friendships and made meaningful connections.

Raising birds is a way of life at Dickie Bird Farm. â€śI will hobble out to collect eggs when I am 95, if itâ€™s the only thing I can do!â€ť I told my husband.

He laughed and said: â€śGood. I wouldnâ€™t have my omelet any other way.â€ť