Chickens & Their Wild Cousins: How Livestock Has Adapted for Winter

In this final of four parts, we learn how chickens adapted to what they couldn't escape via migration. Molting for winter months is a perfect example. 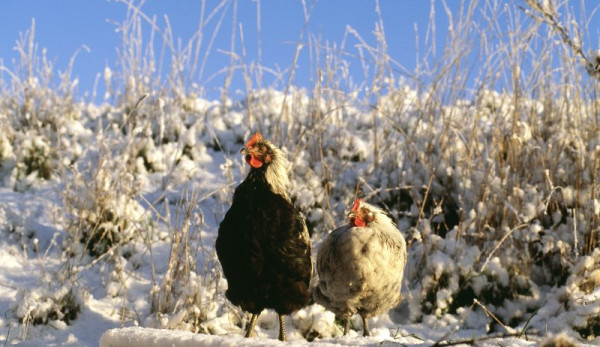 Many species of wild birds respond to winter conditions by migrating. For gallinaceous (chicken-like) birds, flying away from the cold is not an option. Galliformes is a scientific order that includes heavy, grounded birds that are better runners than flyers. The 290 species of galliforms include turkeys, pheasants, guinea, peafowl, partridges and quail.

â€śIf you canâ€™t escape it, adapt to it,â€ť could be the motto for chickens in winter. Rather than taking off for sunnier locations, chickens have an intimate relationship with daylight. As days shorten, egg laying lessens. Another obvious connection is the roosterâ€™s crow that begins at dawn, and, in many cases, continues as long as the sun in shining. In roosters and chickens, the pineal gland is located on the top of the head. Researchers believe a pigment in the pineal gland may cue the animalâ€™s biological clock. In many cultures, the roosterâ€™s crowing is held as a powerful symbol of driving away darkness in other, mystical ways, and with good reason. The roosterâ€™s comb, resembling a flame, complements his morning announcements greeting the radiant warmth of sunshine that makes all life on Earth possible. As the seasons come full circle, more sunshine and longer days bring more eggs, also treasured as new life and fertility, symbolically and literally.

All chickens in the world descend from one species that originated in southern Asia, the red junglefowl (Gallus gallus). Unlike most domesticated livestock, the wild animal is not endangered and exists in healthy populations in its native land. However, the wild chickens have mixed with domesticated-turned-feral chickens so much that their bloodline is no longer distinct, much like feral pigs in North America.

Nature has equipped nonmigratory birds, including chickens, with a few adaptations to help them stay warm in the winter. The molting of the yearâ€™s feathers in the autumn means a fresh, fluffy down is ready by midwinter to trap air in layers that hold body heat. Huddling in the coop helps as well. Birds will bulk up as they sense changes in the air pressure, preparing to hunker down and suspend foraging activities for a while. The right surroundings, whether an insulated chicken coop or native evergreen trees, are important factors in winter survival and comfort. In the wild, microhabitats are important for sheltering birds from precipitation and wind, and the birds will seek out small spaces to avoid harsh weather.

Itâ€™s hard to believe that a jungle bird can endure a winter in the northern states, with subzero temperatures and blizzard wind. While cold is usually more threatening than heat to chickens, the thousands of years of selective breeding has resulted in more than 50 standard breeds, with hundreds of varieties and crosses for distinct colors, dispositions and hardiness. For example, the rare Chantecler has teetered on the brink of extinction and is the only breed developed in Canada. It is specifically acclimated to the extreme cold of the Quebec winters and a good winter egg layer.