Dominique Leal from the California-based farm The Clucking Sisters breaks down the personalities that sparkle in her backyard flock. 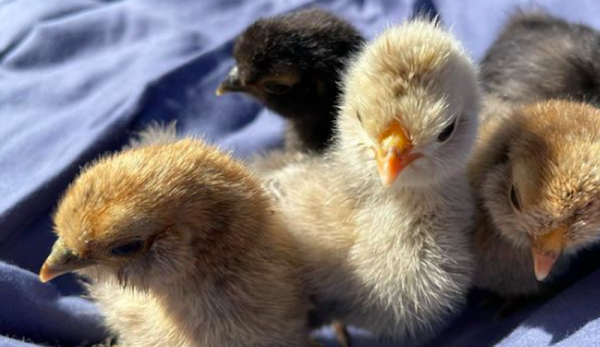 “When I was 5, I remember the exact day I picked up a chicken and cuddled with the fluffiest hen at the San Francisco Zoo,” says Dominique Leal of the Clucking Sisters as she recalls how her love of all things chickens began. “For some reason ever since I‚Äôve wanted my own flock!”

Leal’s poultry dreams now manifest themselves as a vibrant backyard farm in California that serves as the home to over 20 chickens, plus a duck named Marshy. It’s a development she shares to the world under the Clucking Sisters Instagram account.

Taking a moment out from chick duties, we spoke to Leal about developing her flock and why some chickens seem to think that they are really dogs in disguise. We also placed the spotlight on her resident duck.

It turns out that Leal’s mother used to raise chickens in San Francisco long before she, herself, was born.

“That’s probably why I always wanted to have my own chickens one day,” she says. “When the opportunity arose and some of my family moved out of San Francisco in 2019, we went to Tractor Supply Company and got a starter flock! We‚Äôve been adding on to the flock ever since.”

Are Chickens Dogs in Disguise?

Leal says that since cultivating her flock, she’s learned that chickens tend to have unique personalities and behavioral quirks.

“Some of the original flock is potty-trained as well and are part-time indoor,” she explains. “Some I think actually think they are dogs and try to eat and drink out of our small dog bowls.

“They often come over for hugs and love to cuddle, especially when someone is sad. It‚Äôs as if they can sense it and will come over to you.”

Read more: Therapy chickens? Yep‚ÄĒpoultry bring a lot of calm to the coop and the home.

Getting to Know the Flock

When it comes to the stars of the flock, Leal mentions Little Oreo has one of the strongest personalities. “She is mean as vinegar and will karate chop the bigger girls, even weighing in at one pound,” Leal says. “She definitely can hold her own.”

Elsewhere in the ranks, Gigi is described as “very delicate when she walks and is a little on the ditzy side,” while a couple of Buff Orpington twins named Biscuit and Bunny are prime mischief instigators.

“Those two get into the most trouble by teaming up to steal food and to break into the garden beds,” Leal says. “Our lead rooster Fritz is usually on the lookout when they are doing something naughty. He will cock-a-doodle if they are about to get busted in order to warn them in time to make a getaway.”

When it comes to egg-laying consistency, Leal says that Fifi and her daughter Princess claim the longest continuous streak for The Clucking Sisters.

“Both of them have almost gone a whole year laying, even laying while being broody,” she says. “The only break they each took was between two-to-three weeks due to a molt!”

At Leal’s farm, the charismatic Marshy the duck compliments the chickens.

“He actually shares the flock leadership roles with our head rooster,” she explains. “They take turns throughout the day for naps and being on the lookout for hawks and eagles.”

On a less harmonious note, Leal’s cats are sometimes prone to head-bopping some of the chicks after a session rolling around in the catnip beds. “The girls are extremely dramatic about it and will cackle very loudly.”