Tamed by farmers who lived on Chincoteague Island, these ponies can frequently be seen in various horse competitions. 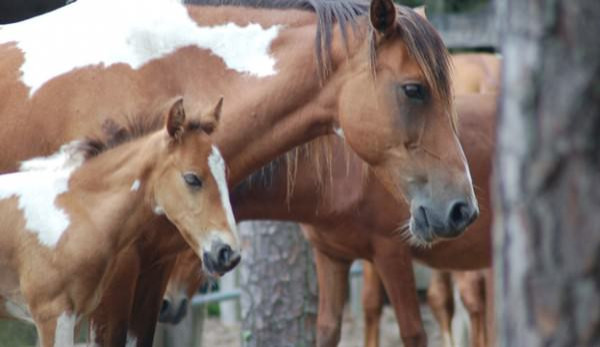 History: For centuries, Assateague and Chincoteague Islands, located in the Atlantic Ocean just on the other side of the Chesapeake Bay, have been home to herds of feral ponies. The descendents of horses of Spanish origin, these ponies survived on the salt marsh cordgrass, thorny greenbrier stems and seaweed plentiful on the islands. By the 18th century, farmers who inhabited Chincoteague Island had begun capturing select ponies from these herds and domesticating them for use on their land. The ponies proved to be rugged and willing to work, and their popularity grew among islanders. In the early 1900s, Chincoteague and Assateague Islands became popular with tourists. In response, the Chincoteague Volunteer Fire Department was created in 1924, and became an important feature in the island community. In order to help secure funds for much needed equipment, the Chincoteague Volunteer Fire Department began holding annual pony pennings, and sold the captured ponies to raise funds. The welfare of the wild ponies became the responsibility of the fire department. The fire department began monitoring the ponies in their habitat, and in the late 1930s, became concerned that the limited gene pool might start to affect the health of the herd. In an effort to infuse new blood, the fire department introduced 20 BLM mustangs to the islands in 1939 to interbreed with the ponies. Later on, Arabians were also introduced to the island. In 1943, Assateague Island was purchased by the federal government and divided into Assateague National Seashore Park and Chincoteague National Wildlife Refuge. The Chincoteague Volunteer Fire Department continued its job of caring for the ponies, and continued its annual pony penning procedure. When Marguerite Henry authored Misty of Chincoteague a few years later, the islands of Assateague and Chincoteague became tourist attractions for horse lovers who came every summer to watch the annual pony penning and to obtain a Chincoteague Pony of their own. To this day, the annual pony penning and festival is this areaâ€™s biggest attraction.

Conformation: Because Chincoteague Ponies are bred through the process of natural selection while in their feral state, the breedâ€™s characteristics are less uniform than what is traditionally seen in other breeds. For this reason, Chincoteague Ponies come in a variety of conformation types. Welsh, Arabian and mustang traits are most common. Nearly all Chincoteague Ponies have an expressive head with a broad forehead, and large, soft eyes. Profiles are either slightly dished or straight, and muzzles are usually tapered. The back is short and the croup rounded. Ponies range in size from 12.2 hands to 14.2 hands, although some individuals are either larger or smaller than this. They also come in just about any color, although pinto markings are most common.

Special Considerations/Notes: Chincoteague Ponies are willing to learn and eager to please. They are also known for being highly intelligent.