With only 100 individuals left in the U.S., the Choctaw hog is the center of a new conservation campaign spearheaded by the American Livestock Breeds Conservancy. 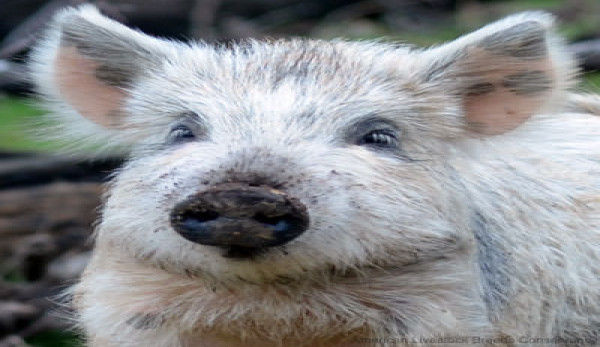 The Choctaw hog, one of the most noted heritageÂ swine breeds in the U.S., has a storied past. It has provided sustenance to people of the West, from Choctaw Indians traveling along the Trail of Tears to Oklahomans trying to survive the Great Depression. However, after a recent trip to Oklahoma, staff at the American Livestock Breeds Conservancy discovered that this historical breed faces a bleak future if swift action isnâ€™t taken.

Due to several factors, including modern farming trends,Â extreme weather and changes in the economy, the Choctaw hog is on the verge of extinction, with only about 100 in existence, says ALBC executive director Eric Hallman. This new population estimate designates the Choctaw hog as likely the most endangered swine breed and one of the most endangered animals on the planet. Only a few farmers in southeastern Oklahoma raise the breedâ€™s entire population, which makes its status even more perilous.

“When all of the animals in a particular breed are located in one geographic location, the threat of extinction increases dramatically because a single catastrophic event could wipe out the entire population,â€ť says Alison Martin, PhD, ALBCâ€™s technical programs director.

As one of the last free-ranging domesticated swine breeds, Choctaw hogs are genetically unique, and the ALBC places high priority on their conservation. According to world-renowned expert in rare livestock breeds, Dr. Phil Sponenberg, DVM, PhD, Choctaw hogs are smart, hardy and agile and are “remarkably self-sufficient in mothering and foraging in the rangelands of Oklahoma.”

“A loss of this breed would be a significant blow to biodiversity in agriculture,â€ť Martin says.

Modern agricultural practices tend to focus on the use of a few highly specialized breeds selected for maximum output in a controlled environment, causing any traditional livestock breeds, such as the Choctaw, to dwindle in popularity.

The recent economic recession has also contributed to the Choctaw hogâ€™s demise. Because heritage breeds grow more slowly than industrial breeds, they tend to sell for a higher price. As more consumers lean toward purchasing cheaper foods, the demand for heritage meats has fallen and farmers are breeding fewer animals, adding to the challenges for endangered breeds. Choctaw hogs still have a role in agriculture, however. Because of their small size and excellent foraging capabilities, they make an ideal animal to raise on small-scale family farms. In addition, chefs around the world have taken note of the heritage breedsâ€™ exceptional flavor and are incorporating them into their menus.

The ALBC is quickly putting together an initiative to start a conservation breeding herd to increase the Choctaw hogâ€™s numbers.

“Currently, we are in need of funds to purchase fencing, feed and other items for the conservation herd,â€ť Martin says. “After the population becomes more stable, breeding stock will start to become available to the public. We have had success with similar projects in the pastâ€”a number of breeds, including Randall Lineback cattle, San Clemente goats and Santa Cruz sheep, have been rescued from similar circumstances by ALBC. We hope to do the same for the Choctaw hog.”