Choose The Right Nail Gun For Your Needs

If you’re doing a lot of construction and repair work on your farm, add a nail gun to your tool arsenal. 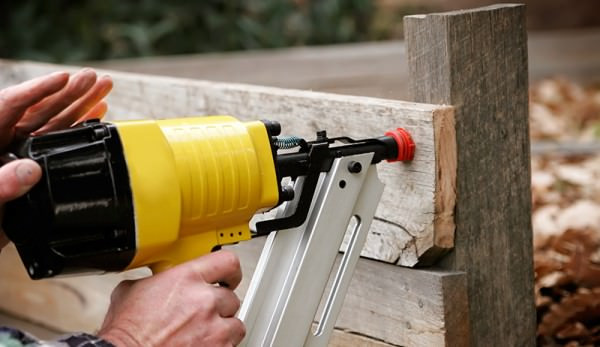 One of the foundations of construction work and repair tasks is the need to fasten two objects together, and nails are frequently the fasteners of choice. For small jobs, such as hanging a picture on a wall, a regular claw hammer and some loose nails will do the trick, but if the task at hand is more involved or repetitive, you might want to purchase a nail gun, aka nailer. Because nail guns take a fraction of the time and effort involved in hammering nails by hand, they can transform a lengthy construction task into a significantly more manageable one.

That said, all nail guns are certainly not created equal. It might seem like a nail gun is a nail gun is a nail gun, but on the market, you’ll find a variety of distinctions between models, including magazine type, power source, firing method and application. With so many options, it can be difficult to narrow down exactly what nailer fits the needs of you and your project. Here’s some information on each to help find the perfect nail gun for you.

There are two major types of nailer magazines: coil and stick, both named for their outward appearance. In both varieties, nails are held together in the clip by strips of paper, plastic or thin wire.

This nail-gun style uses long strips of nails that have been collated in a straight line. Each stick usually contains between 20 and 40 nails and fits into an oblong magazine. Because stick nailers don’t hold many nails at one time, they’re ideal for smaller projects that don’t require as many fasteners. Stick cartridges are also sturdier than their coil counterparts, allowing for multiple clips to fit into a tool belt without as much risk of damaging the collating material. Stick nailers also tend to be less expensive than similarly designed coil nailers.

In a coil magazine, nails are collated in long, flexible strings that wrap around themselves, creating a circular cartridge that fits into the nail gun’s spherical magazine. This compact design allows these nailers to hold many more nails per cartridge—between 150 and 350—though you pay for the convenience: In addition to the added weight, coil-style nailers can cost up to twice as much as stick-style nail guns. This is why these guns tend to be best suited to commercial applications. Additionally, the coils are more fragile than the sticks, and if a coil gets crushed, it might not properly feed into the gun.

Nail guns can also be divided into two major types based on hammering power source: pneumatic and combustion. Both types derive their actual motor power from either batteries or a household AC current.

These nail guns are more common than the cordless variety, and they obtain their fastening ability from an attached air compressor. The compressed air makes pneumatic nailers powerful tools, but they tend to be cumbersome due to the bulky air compressor and the hose that feeds air into the gun. If you already own a compressor and plan to frequently use your nailer for a variety of tasks, a pneumatic gun might be a good choice.

Also called cordless nailers, these nail guns are powered by small explosions, similar to the combustion engines in automobiles. A spark plug ignites a small amount of flammable gas in a closed fuel cell, and the force of the resulting blast is large enough to drive the nail into the desired material. Because they don’t require an attached air compressor, combustion nailers are ideal for light- to medium-duty jobs that require mobility and speed, though they tend to cost more than pneumatic nailers (due to the convenience of being cordless) and are slightly less powerful in the long run.

To fire a nail, all nailers have two controls that must be successfully activated: the safety contact tip, which requires that a nail gun’s nose be firmly pressed into a solid material to fire, and a trigger, which will fire a nail when pulled. The contact tip is an added safety precaution to keep nailers from accidentally being discharged midair.

According to “Nail Gun Safety,” a joint publication from the National Institute for Occupational Safety and Health and the Occupational Safety and Health Administration, different trigger styles stem from two major variables: in what order the two controls must be activated, if any, and how the nailer fires additional nails after the initial fastener is released. The combinations of these variables result in four different types of trigger activation:

The safest trigger type, a full sequential trigger will only fire a nail after the operator presses the safety contact tip against a solid material and subsequently pulls the trigger. To fire another nail, both the contact tip and the trigger must be released and reactivated.

Nailers with this type of trigger mechanism allow the contact tip and the trigger to be activated in any order, leading to a technique called bump firing, where the tool’s operator holds the trigger in and repeatedly presses the contact tip against the workpiece, firing a nail each time.

This trigger style requires the operator to press the safety contact against a solid material and then squeeze the trigger to fire. However, unlike the full sequential trigger, it does not require the contact tip to be released before firing another nail; therefore, the nailer can be dragged across the work surface and every pull of the trigger will fire an additional nail.

The single-actuation trigger style is a combination of the contact and the single sequential trigger: The nailer will fire one nail when the controls are activated in any order, and the contact tip doesn’t have to be released to fire additional nails.

Finally, nailers can be separated into categories based on their intended use or application. From heavy-duty roofing nailers to lightweight brad nailers, there’s a nail gun for any job you need to tackle.

As the name suggests, framing nail guns are commonly used for heavy construction that requires driving large 3- to-4-inch long nails into thick materials, such as connecting 2x4s when framing a building. Because these nailers are the heaviest-duty variety, they also tend to be the most expensive. The Hitachi NR83A2, for example, is a pneumatic stick framing nailer that offers an adjustable depth of drive to easily change how deep the gun will fire nails into its designated target.

Most commonly available for coils, these nailers are designed for fastening roofing shingles, so they fire shorter nails with larger heads and allow for longer periods of work on roofs. These nail guns can also be used for siding, insulation and exterior drywall attachment. A cordless, combustion gun is recommended for lengthy, precarious jobs.

The most specialized variety of nail gun, these tools make laying hardwood floors a breeze, as they allow their operators to quickly and easily attach tongue-and-groove floorboards to the subfloor below. Flooring nailers can be pneumatic or manually powered, both of which fire nails with a hammer whack to a plunger.

Perfect for interior trim, cabinets and baseboards, the finishing nailer is the best all-around type for small- to medium-scale jobs. They might lack the power needed for roofing or framing, but their small size and portability make them ideal for odd jobs around the farm.

Basically a smaller version of a finishing nailer, these guns fire small yet strong nails, and are ideal for pieces that might split under the force of a finishing nailer. They are typically used in furniture upholstery and small, wood-construction projects, and can usually be identified by their hand-held size and straight magazine—other stick-style nail guns have angled magazines.

This article originally appeared in the September/October 2013 Hobby Farms.