Researchers continue work on breeding bees for hygienic disease resistance, to protect bees from Varroa mites and other contributors to colony collapse disorder. 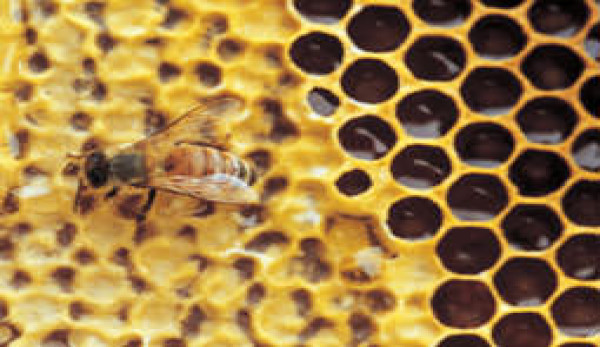 Diseases, pests and the mysterious phenomenon ofÂ colony collapse disorder pose a dire threat to the U.S. beekeeping industry and, in turn, to the $20-billion-a-year crop industry that relies on insect pollination. Because of these increasing pressures, the ranks of managed bee colonies have plummeted in recent years: On average, beekeepers are losing 30 percent of their colonies every growing season.

While the exact cause of colony collapse disorder is unknown, researchers believe it to be the result of a combination of factors, one of which is the Varroa destructor (V. destructor) mite, a pest introduced to the country in the late 1980s. The Varroa mite, difficult to control because it has become pesticide resistant, attacks bees by sucking their blood, thus spreading viruses among colonies and weakening individual bees, making them susceptible to pesticides not intended to harm them.

Rather than relying on pesticides and antibiotics to control Varroa mites and related diseasesâ€”a method that has become part of the problemâ€”University of Minnesota entomologist Marla Spivak is advancing effective strategies that help bees help themselves.

Spivak and her team have received six Sustainable Agriculture Research and Education grants since 1997 to support their work of showingÂ beekeepers how to identify and breed for hygienic beesâ€”bees that are adept at spotting infected immature bees (larvae and pupae) and quickly removing them from the nest before a disease or pest can get out of control in a colony. “We mostly research ways for bees to keep themselves healthy, using their own natural defenses so we can avoid chemical inputs,â€ť Spivak says.

Their researchâ€”now supported by a $500,000 MacArthur Foundation “geniusâ€ť grantâ€”has demonstrated that colonies bred for hygienic behavior have good resistance to chalkbrood and American foulbrood diseases, and partial resistance to V. destructor. Over time, the establishment of disease-resistant bees has the potential to save commercial-scale beekeepers thousands of dollars each year in treatment costs while reducing the environmental impact of pesticide use.

Spivakâ€™s SARE-funded research also includes innovative sampling strategies for beekeepers to determine the extent of an infection in a colony, and therefore how much treatment might be needed.

After helping three commercial-scale beekeepers in Minnesota establish hygienic disease resistance in their colonies, Spivak and her team are now working closely with some of the countryâ€™s largest bee breeders to adopt the sustainable pest-management strategies that make sense for them, including breeding and sampling strategies. Many of the breeders with whom they are collaborating sell queen bees throughout the country, giving Spivakâ€™s team the opportunity to have widespread impact.

“We need genetically diverse bees,â€ť Spivak says. “That is the impetus for me to work with bee breeders to help them select for hygienic behavior from among their genetically diverse, and tried-and-true lines of commercial bees.â€ť

While much of Spivakâ€™s research focuses on the European-imported Honey beeâ€”the primary victim of colony collapse disorderâ€”she and her colleagues have also turned their attention to the wide range of native bee species that are also embattled, yet serve an important role in crop pollination. In 2010, Spivak co-authored and SARE published Managing Alternative Pollinators, a first-of-its-kind technical guide for rearing and managing key alternative species.