Hearty, intelligent Cleveland Bays are most well known as carriage and driving horses--and work well on teams. They are critically rare, with only 200 alive in the United States. 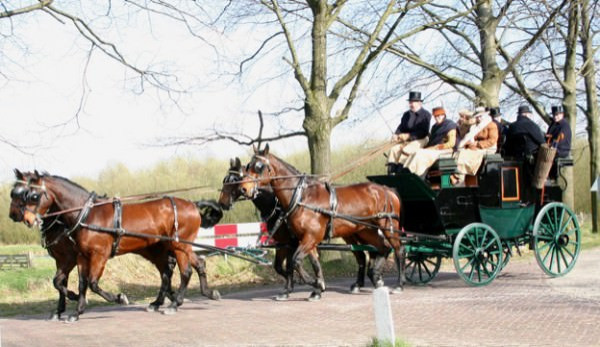 Use: Cleveland Bays are known for being excellent carriage and driving horses, and are often driven in teams of two, four or six. The breed has competed at FEI level in driving. They are also used for eventing and hunt seat. The breed is often crossed with the Thoroughbreds to create a lighter sport horse suitable for jumping, eventing and dressage

History: The Cleveland Bay originated in the Cleveland area of northeast England. The breedâ€™s ancestors worked as pack horses in the monastic houses of north eastern England, carrying goods between abbeys and monasteries. These pack horses were known as Chapman hoses and were bred in the Yorkshire Dales. When barb horses were introduced to England, they bred with Chapman horses to create a light harness horse similar to todayâ€™s Cleveland Bay. By the late 1800s, this horse was being used in other areas of England besides the northeast. The need for faster carriage horses lead horsemen to cross the Cleveland Bay with Thoroughbreds. The resulting breed, the Yorkshire Coach Horse, was tall and elegant. It became a popular horse with the wealthy in Europe and was soon exported all over the world. The breed came to America in the late 1800s, and curried favor with the famous showman Buffalo Bill Cody. He drove a team of four Cleveland Bay stallions in his Wild West Show. The breed declined with the invention of motorized vehicles and considerable crossbreeding, and today is considered rare.

Conformation: Cleveland Bays are known for their intelligence and willing disposition. They are medium-weight horses, and are heavier in build than most warmbloods. They are hardy, long-lived horses that measure anywhere from 16 to 16.2 hands. Their bodies are wide and deep and the back strong with muscular loins. The shoulder is sloping, deep and muscular, and the hindquarters are level and powerful. The head is carried on a long, lean neck. These horses only come in bay. The only white marking allowed is a small star on the forehead.

Special Considerations/Notes: Cleveland Bays are very rare, with only 200 alive in the United States, and 500 alive worldwide. The American Livestock Breed Conservancy ranks the Cleveland Bay as â€ścriticalâ€ť on its endangered breeds list.