The iconic Clydesdale is a draft and driving horse that is also frequently used in shows, exhibitions--and even on trails. 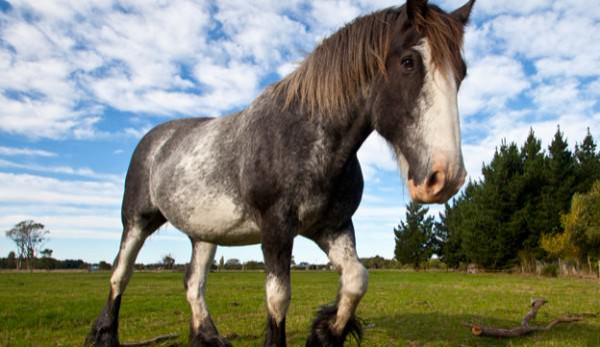 Use: The Clydesdale is most known for its abilities as a draft horse, and the breed is used in driving shows and exhibitions. Clydesdales can be ridden as well, and are being seen on trails around the country.

History: Descending from the warhorses of the Middle Ages, the Clydesdaleâ€™s more modern ancestors worked in the fields of Scottish farmers. In the 18th century, the Clydesdale took on its modern appearance. A system present at the time in Scottish agriculture, which dictated the hiring of particular stallions to service mares within each district, helped to create a breed of horse that was consistent in type. Slowly, the breed developed a distinctive look, and eventually became known as the Clydesdale, a name taken from the area of Scotland we know now as Lanarkshire. The breedâ€™s official debut under the name of Clydesdale was in 1826, at the Glasgow Exhibition. Because of the Clydesdaleâ€™s great strength and tractability, the breed was used as a workhorse on Scottish farms, and to haul coal. Today, the Clydesdale is virtually the only draft horse seen in Scotland. In 1877, the Clydesdale Horse Society was founded in Great Britain. In 1879, Americans in the Midwest who were using the breed to work their farms and to haul heavy loads joined together to form the American Clydesdale Association. The name was later changed to the Clydesdale Breeders of the United States, and now includes Clydesdale aficionados from both the United States and Canada. While not as popular as the Belgian and Percheron, the Clydesdale was in some demand during the late 1800s in America. It was not until the arrival of mechanized machinery that the Clydesdaleâ€™s popularity–along with that of the other draft breeds–began to slip. Powerful workhorses were replaced on farms by motorized tractors, which did not have the same maintenance requirements as the big horse, and could do a lot more work in less time. As the need for Clydesdales lessened, the breedâ€™s numbers began to shrink. A handful of breeders dedicated to the breed hung on desperately, and continued to keep the Clydesdale alive as a show and exhibition horse.

Conformation: Clydesdales measure anywhere from 16.2 hands to 18 hands, and can weigh from 1,600 pounds to 2,200. Color and markings also vary within the breed. Most Clydesdale are bay with a white blaze and white stockings, but some also come in black, brown and chestnut. Roans are seen in all of these colorations. While the preferred markings are four white socks to the knees and hocks, and a well-defined blaze or bald face, horses with one or more dark legs are often seen. White patches on the belly–called â€śsplashesâ€ť in the breed–are also common, although somewhat controversial; some Clydesdale breeders donâ€™t like the splashes, while others believe they should not be considered a flaw. Clydesdale breeders look for horses with â€śaction,â€ť which they describe as high-stepping movement with a distinct lifting of the feet. Each foot must be raised well off the ground, leaving someone standing directly behind the horse able to clearly see each and every shoe as it flashes into the air. The Clydesdale is known for having a gentle and tractable disposition.

Special Considerations/Notes: The most famous Clydesdales in the world are the Budweiser Clydesdales. For the past 75 years, Anheuser-Busch has been exhibiting these horses, which are bred specifically to represent the Budweiser name.