This week, our mom is transferring material from her dinosaur Macintosh computer to her PC. While doing so, she found this article that appeared in the June 1980 issue of Horse Illustrated. It made her smile, so we asked if we could share it with you. 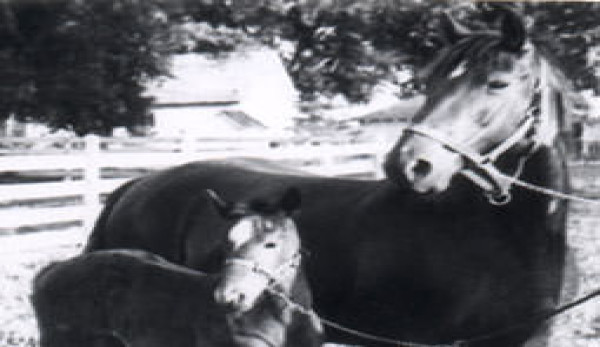 This week, our mom is transferring material from her dinosaur Macintosh computer to her PC. While doing so, she found this article that appeared in the June 1980 issue of Horse Illustrated. It made her smile, so we asked if we could share it with you.

Confetti and Positive Thinking
Not everyone can say a horse changed the course of her life. I can.

Everything was going wrong. My marriage was failing. I was working long hours of overtime at a factory job I hated. I had no one to talk to. I had no faith in myself or my abilities. Life simply wasn’t worth living.

It was early August in 1972, and the 4-H fair was in full swing. There was an open horse show scheduled for that evening, and in better times, I’d have been eager to show my registeredĀ Morgan mare, Confetti.Ā  But I’d been so down that summer that I’d had her bred and turned her out to pasture.

Confetti was my sole consolation in those dark days. I bought her two summers before as an overweight, aged broodmare, barely broke to ride. I schooled her and even showed her in western pleasure one time. But now she was just my friend. I spent many quiet hours with her, telling her my troubles. She listened. She understood. She was the only one who seemed to care.

I’d just finished reading Dr. Norman Vincent Peale’s The Power of Positive Thinking. Its message is that nothing is impossible, and there’s always hope if you can believe and have faith. I liked that idea, but it’s hard to have faith and believe when your world is falling apart.

A friend pulled into our driveway that evening. He wanted to know why I didn’t have Confetti over at the show. I explained that she hadn’t been ridden all summer, was 5 months pregnant, grossly overweight,Ā  wasn’t cleaned up, and what was the use anyway?

Bill and I grew up together, and he knew me pretty well. He thought the show would do me good and wouldn’t accept my lame excuses. He helped bathe and clip Confetti, loaded my tack into the trailer, and before I knew it, I was at the fairgrounds.

Confetti was awestruck. She’d only been shown once before, at a sane, sensible afternoon affair. Now it was night with bright floodlights around her. An enormous Ferris wheel loomed right at ringside. Nearby, a merry-go-round carried laughing, shouting children. Carnival sounds filled the air.

Out beyond the parked trailers I found a relatively quiet spot to ride and reflect upon a thought that came to me. Maybe, just maybe I could do the impossible if I could believe. I breathed a little prayer, “Just let this horse go into the ring and work as well as she can. She’ll do her best if you let her know how important it is to me. If she does, under these circumstances, I’ll know it’s a sign from you that you’ll help me overcome my troubles.” I didn’t ask to win. That wouldn’t be right. But if Confetti showed her best, it would be enough. It would give me hope.

We entered just one class: open western pleasure. When we rode into the ring there were 33 entries … and us. The judge was a noted AQHA judge and we were the only non-Quarter Horse type entry!

What a tough class it was! The judge clearly liked a working horse! We performed on the rail, lined up, then the judge called his finalists to the rail. My heart skipped a beat when he pointed at Confetti and me! We finalists hand galloped, we reversed at a lope, we dropped our stirrups, we did sliding stops, and through it all, Confetti worked her heart out. It was like riding in a dream: the blare of the PA system, the blurred faces of spectators ringside and my little mare doing everything with total perfection, her shortĀ  legs pumping, long mane and tail flying, roaring along at a hand gallop and sliding into a beautiful square stop. What a ride! I patted her enthusiastically as we rode back into the lineup.

I will never forget the feeling that swept over me when the announcer called our number for first place! At that moment a horse showed me that if I had faith, if I had hope, if I could believe, things could be different.

Confetti is gone now and I miss her. She was the special horse in my life. Her trophy, unlike all of the others that are packed away in dusty boxes in the attic, sits proudly on my bookcase. It reminds me of a fat little chestnut mare who taught me the meaning of faith.

Because of the hope Confetti gave me that night, I had the courage to pick up the pieces of my life. Today, I’m happily married and my life is good. From a mare named Confetti, I learned that a horse can be more than “just a horse.” A horse can make life worth living again.