Langstroth beehives will fit the bill for many beekeepers, but a few different designs do exist to choose from when keeping honeybees. 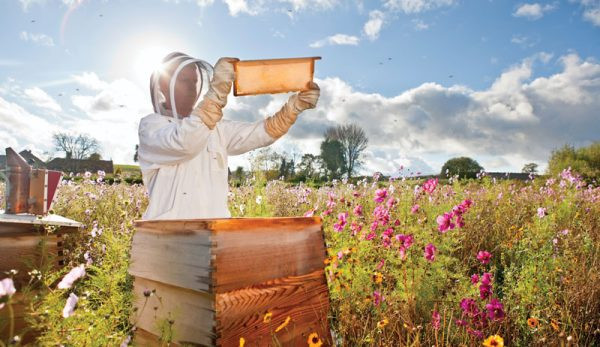 From the type of honeybees you choose to the number of beehives you manage‚Äîand how you choose to manage them‚Äîthere is seemingly endless variability in beekeeping. For new and expanding beekeepers, deciding which kind of beehive to use is yet another variable in play.

Your beekeeping goals, local climate and budget are a few factors to consider as you weigh your options. Your equipment‚Äôs interchangeability is paramount, too.

Michael Bush, author of The Practical Beekeeper book series, primarily uses modified Langstroth beehives. ‚ÄúI run all eight-frame, medium Langstroth boxes,‚Äù he says. ‚ÄúFull of honey, they don‚Äôt weigh over 50 pounds, and I use them for everything.‚Äù

Well, nearly everything. Bush also keeps bees in some top bar hives, Slovenian hives, Flow hives and a Huber observation hive. But he doesn‚Äôt necessarily recommend mixing and matching your own beehives to such a degree.¬Ý

Interchangeability‚Äîand the ability to easily expand colony size as needed‚Äîare just part of the appeal of Langstroth beehives for David T. Peck. Peck holds a Ph.D. from Cornell University‚Äôs department of neurobiology and behavior and serves as director of research and education at Betterbee.¬Ý

‚ÄúAll of my bees are in vertical, Langstroth hives,‚Äù he says. ‚ÄúBees have been living in vertical, hollow trees for millions of years. So they‚Äôre pretty well-adapted to that configuration.‚Äù

Filled with individual, moveable frames, Lorenzo Langstroth‚Äôs series of stacked supers has become ubiquitous in North America. ‚ÄúThe standardization in the U.S. is something that makes our beekeeping market hard to change, because there‚Äôs only the one style and almost everyone uses it,‚Äù Peck says.

In fact, accessories such as the Hogg Halfcomb and Ross Round comb-honey systems only work in Langstroth beehives. ‚ÄúWith both of those, you have a section‚Äîa cavity‚Äîthat the bees will walk right up into, will naturally build comb into and will fill with honey,‚Äù Peck says. ‚ÄúThen, once the [comb-honey frames] are full, you can take them out, put them either into a round or square container, label it and bring it to your farmers market.‚Äù

What‚Äôs more, formic acid and certain varroa mite treatments were designed specifically for use in Langstroth equipment. ‚ÄúThat‚Äôs where they‚Äôve proven that the rate at which the medicine is released from the pad is going to come out and then be ventilated by the bees and vented out of the open entrance at the right rates so that the bees survive and the mites die,‚Äù Peck says. ‚ÄúThose tests have not been run and validated on top bar hives or on horizontal hives or on different designs.‚Äù

That‚Äôs not to say such medications can‚Äôt be used in other beehives. But, he adds, ‚ÄúThat‚Äôs not the labeled and intended use for those products.‚Äù

Plenty of beekeepers, looking to skip chemical pesticides and artificial foundation, have gravitated to top bar beehives. Unlike its vertical Langstroth counterpart, the top bar hive is a long, horizontal box with individual foundation bars suspended across its top. Bees attach natural comb beneath the bars. Beekeepers pull individual frames‚Äîrather than heavy Langstroth supers‚Äîto inspect one at a time.

‚ÄúThe modern top bar hive‚Äîcalled the Kenyan top bar hive‚Äîwas actually invented in Canada as part of a Canadian government and university international development grant,‚Äù Peck says. ‚ÄúThey designed that so they could go to sub-Saharan Africa or to Latin America where they were trying to encourage people to keep bees in order to boost their economic productivity or pollinate their crops. “In those climates, the bees tend to do pretty well.‚Äù

What about Minnesota or upstate New York?

‚ÄúThe top bar hive has a tendency to get the bees working off in one direction and then move them too far away from their honey,‚Äù he says. ‚ÄúInstead of the heat of the cluster slowly rising and warming that next layer of honey upwards, the heat from the cluster rises, but the honey is on the other side of that top bar trough. Now the bees have to march through very cold temperatures to try to get there and get more fuel.‚Äù

Still, Bush sees at least one clear advantage: ‚ÄúIf you‚Äôre handy with materials and have access to scrap wood, you could probably build a top bar hive for free … [but]¬Ý you can get natural comb by doing foundationless [frames] in any kind of box…. And you can build a long hive and put Langstroth frames in it and not have to lift boxes.

“So, you can get that without doing a top bar hive.‚Äù

For its part, the Flow hive is a variation on the Langstroth hive. ‚ÄúExcept the Flow hive has a super that you can harvest without having to take it off,‚Äù Bush says. He was sent early versions of the Flow hive to try before they hit the market and a few more since they‚Äôve become commercially available.

Developed by Stuart and Cedar Anderson, the Flow hive features specially designed plastic frames paired with a crank mechanism to facilitate the honey harvest. ‚ÄúBasically, it‚Äôs made up of a whole bunch of strips of plastic that have half of a cell on the right and a half of a cell on the left,‚Äù Bush says. ‚ÄúAnd there‚Äôs just two kinds of those, and they‚Äôre all put together to make this long frame.

“One of the kinds of cells stays put and the other one moves up and down. So, you stick the crank in underneath and you turn it. It pops half of [the cells] up, which makes a zigzag channel, so the honey can run out and air can come in at the top.‚Äù

Bush allows the honey to run through tubes that drain into a 5-gallon bucket. Finding brood mixed in with the honey harvest hasn‚Äôt been an issue.

Because honey cell cappings remain intact even during harvest, the flowing honey doesn‚Äôt make a mess inside the colony. Although Bush appreciates the design, he can‚Äôt justify its expense. ‚ÄúIf I had very many [non-Flow hive colonies], I could buy an extractor for less than I could buy two or three of these Flow hives,‚Äù he says.

But for beekeepers with just a couple of beehives‚Äîrather than a couple hundred‚Äîthe Flow hive could be worth the price.

If money‚Äôs no object, you could build a bee house complete with Slovenian beehives. Also known as AZ hives‚Äînamed after their creator, Anton ≈Ωnider≈°iƒç‚ÄîSlovenian hives are made to fit neatly within a larger, often climate-controlled structure.

‚ÄúAn AZ hive opens from the back, and the frames pull straight out,‚Äù Bush says. ‚Äú[The beekeeper] can sit in an air-conditioned bee house where his extractor is. He can go over to the hive, pull the frames out, uncap them, put them in the extractor, extract and put them back in.

“All in his 70-degree, air-conditioned honey house. And he‚Äôs never even gone outside.‚Äù

Because individual frames are removed, rather than entire supers, there‚Äôs no heavy lifting. Also, the ability to heat the bee house even by a little could make all the difference for beekeepers with harsh winters.

Even so, Slovenian hives aren‚Äôt for everyone. ‚ÄúHere‚Äôs the problem with the Slovenian hive,‚Äù Bush says. ‚ÄúThe frames are an odd size, because that‚Äôs what they use in Slovenia. So, they won‚Äôt fit in a typical [Langstroth frame] extractor. Another problem is that the typical foundation that‚Äôs available here won‚Äôt fit in the frames.‚Äù

Fortunately, a Georgia-based beekeeper eventually did modify the Slovenian design so that it could accommodate Langstroth-sized frames. Nevertheless, Bush‚Äôs Slovenian hives aren‚Äôt tucked inside a fancy bee house.

‚ÄúIt doesn‚Äôt work very well for me, mostly because I need to have them up off the ground more,‚Äù he says. ‚ÄúI open the door and I‚Äôm kneeling behind it trying to reach in and pull out frames. It just kills my back and knees.‚Äù

Better to find that out on a small scale. ‚ÄúEven if you tried one [kind of hive] and it seemed to work, I wouldn‚Äôt go out and build 1,000 of them,‚Äù Bush says. ‚ÄúStart small, make sure you like it and then grow it organically.‚Äù

This article appeared in Hobby Farm Home, a 2023 specialty publication produced by the editors and writers of¬ÝHobby Farms magazine. In addition to this piece, Hobby Farm Home includes recipes, crafting projects, preservation tips and more. You can purchase this volume, Hobby Farms¬Ýback issues as well as special editions such as¬ÝHealing Herbs¬Ýand¬Ý¬ÝGoats 101¬Ýby¬Ýfollowing this link.