Consider These Things Before You Start Beekeeping

Think you may want to start beekeeping? Get ready first, as there's more to it than just setting and forgetting a hive. 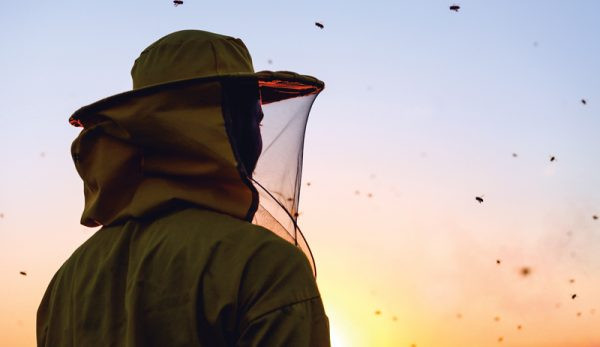 So you think you might want to start beekeeping? It can be an interesting and rewarding hobby or side business. There is no wonder it has been growing in popularity in recent years.

The startup cost for one hive is modest compared with that of other livestock. It costs about $500 for a hive and bees, plus another couple of hundred for a smoker, protective clothing and other incidental equipment.

To start beekeeping requires very little space and labor. As essentially wild animals for which we furnish artificial housing, honeybees provide for themselves on a day-to-day basis.

Hive inspections once or twice a week during the spring and fall take no more than an hour or so per hive. More time is required for management during the spring swarming season, though, and also for the honey harvest.

That brings us to the rewards. New colonies donâ€™t usually produce enough honey for harvestingâ€”or collecting rent, as I like to call itâ€”during the first season. After that, a strong hive can yield as much as a 100 pounds per year depending on region, availability of nectar sources and weather.

In addition, through pollination, honeybees can dramatically increase the productivity of certain plants, particularly that of melons and fruit trees.

Unfortunately, many new beekeepers who take up the hobby each year lose all their bees and give up in discouragement. The most common reasons for failure are lack of preparation and lack of management, often stemming from unrealistic expectations about what it involves to start beekeeping.

Indeed, the very term is misleading.

In our grandparentsâ€™ day, to start beekeeping all you had to do was capture a wild colony, relocateg it to a hive in the backyard and wait for the golden harvest. In other words, it consisted simply of keeping bees.

Since the 1980s and the accidental introduction of pests from Asia, though, successful beekeeping has meant active bee management. And that requires education.

Though managing hives doesnâ€™t take much time compared with rearing livestock such as chickens, goats or pigs, learning about honeybees requires some commitment.

New hives are established in the early spring. The time for ordering packages of bees, nucleus hives and equipment is the preceding November or December.

I recommend that anyone interested in becoming a beekeeper begin preparing a year before that.

The first step is reading. A number of books exist for the beginning beekeeper.

Some good, basic ones are:

(All of these have multiple editions, so be sure to get the latest.)

There are also two magazines published in the U.S. that are dedicated to beekeeping and can help you start: Bee Culture and American Bee Journal.

While a lot of information is also available online, it comes with the usual caveat. Together with scholarly articles, sound advice and useful videos, the internet abounds with doubtful science and outright misinformation.

View with skepticism and check whatever you see online against accredited sources.

Reading is essential but not sufficient. I thoroughly understand the physics of balls moving across a pool table, but that doesnâ€™t mean I always make my shot.

The next steps in honeybee education are join a group, take a class and find a mentor.

As more people start beekeeping, clubs and associations have sprung up throughout the country. Check online or with your state apiarist to learn whether one meets near you.

Associations can be helpful in several ways. For one thing, they are sources of local expertise. Books and magazines necessarily provide general information, but seasons, climate and nectar sources vary from area to area.

Experienced beekeepers can help with questions that depend on local conditions, such as:

They can also advise on equipment and suppliers when would-be beekeepers are daunted by catalogs full of unfamiliar terminology and brand names. Some groups even pool orders to take advantage of bulk discounts on medications or packages of bees.

Most of all, local associations provide support. A few groups might be more social in nature, but most of them aim primarily to promote the craft of beekeeping, help beginners start up and provide ongoing education.

To that end, many larger associations provide full-day or multi-day bee schools, including tracks specifically for beginners.

These offer a chance to suit up and open a hive, to breathe in the smells of wax and fresh honey and hear the drone of the hive move up a notch in pitch as you lift the inner cover.

Itâ€™s one thing to differentiate queens, workers and drones from pictures in a book, but another to pick them out of a roiling mass of bodies on the frame in your hands while flying bees pop against the mesh of your veil.

Thatâ€™s an experience you should have before you invest in bees and equipment.

Most beginners start with some anxiety and gain confidence with practice. If you canâ€™t attend a field day, ask an experienced local beekeeper to let you help by lifting boxes on and off as he or she inspects or treats hives.

That brings us to the last point in preparation. Find a mentor in your area when you start beekeeping, ideally through your local association.

Beekeepers are each part of a network, and itâ€™s a generous oneâ€”not only with advice but also with time.

Mentors might help each other harvest honey or pitch in when one is sick or hurt. They love their craft and are eager to share it. There is really no competition because small-scale producers have no trouble selling all the honey they can collect.

An experienced local beekeeper offering advice and encouragement when a beginner is overwhelmed can make the difference between a lost colony and a successful oneâ€”or a discouraged ex-beekeeper and an enthusiastic apprentice.

These are 5 important guidelines for feeding honeybees.

Letâ€™s say youâ€™ve done your preparation: reading, taking classes and finding a local group and mentor. What are the management issues with honeybees, and why is management so important?

First of all, bees are fundamentally different from other agricultural livestock. They are insects, and, moreover, they are social ones.

The familiar cues that tell us when a mammal, such as a sheep, is not healthyâ€”temperature, weight loss, loss of appetite and so onâ€”are absent in these little alien creatures. In fact, the entity we care for is not the bee, itâ€™s the colony.

In social insects, the individual is unimportantâ€”even in a genetic sense, as only the queen is fertile. A honeybee colony is an organism, composed of single insects somewhat as a human body is composed of cells.

Individuals are born and die without affecting the health of the whole. (Worker bees live less than 6 weeks when active, and even the queen is replaced periodically.)

A colony grows by producing more bees. It reproduces by swarming. When it becomes crowded in the space it occupies, it divides to form two separate colonies.

One group leaves the hive (swarms) with the old queen while the other remains behind with a newly created queen. Sometimes a colony dies. These are natural stages in the organismâ€™s life cycle.

Itâ€™s easy to assume that these events would take place in a human-made hive as readily as in a hollow tree, and to wonder why they should require the intervention of a beekeeper.

For one thing, when wild honeybee colonies were abundant, as much as 50 percent would die out every year. That is a high loss rate. Managed colonies should do better.

For another, swarms might be natural, but to the beekeeper, they mean lost honey production. By monitoring the condition of colonies and dividing them when they begin to outgrow their hives, the beekeeper helps them reproduce but keeps all the bees in the apiary instead of losing half of them.

If vigilant, the beekeeper can prevent weak colonies from being robbed by stronger ones or preserve the bees by combining one or more weak colonies to form a single healthy one.

The circumstance that makes human management most essential is one that was created by human beings in the first place.

Honeybees are not native to the North or South America. They were brought here from Europe by settlers in the early 16th century and adapted readily to their new environment. As captive colonies swarmed, the woods filled with wild bees.

Beekeeping in the U.S. has changed over the years, notably with the invention of the modern hive in the mid-1800s and with large scale movement of bees for pollination after World War II.

But the greatest disruption in modern times came as world trade brought about the accidental introduction of honeybee parasites and diseases from overseas.

Tracheal mites from Asia and the small hive beetle from Africa, among others, have taken a toll on wild and managed bees. But the varroa mite has worked the real devastation.

The tiny arachnid (Varroa destructor) was discovered in the U.S. in 1987. It originated in Asia, where it preys on native bees, feeding on the fat organs of adults and brood.

Asian bees have evolved over millennia to coexist with varroa. But our European bees were defenseless.

In less than a decade, varroa had spread throughout the U.S., wiping out hundreds of thousands of managed hives and virtually eliminating feral colonies. The future of honeybees, not just of beekeeping, was in doubt.

The first pesticides used in a desperate attempt to control mites were harsh chemicals damaging to hosts as well as parasites. Within a few years, mites began to develop resistance to one pesticide and then another.

To make the situation even worse, varroa mites are vectors for more than 20 viruses that affect bees and can be debilitating in themselves.

Researchers continue to develop new chemical treatments, more specifically targeted and less harmful to honeybees. They have also devised diagnostic tools to assess the degree of varroa infestation and management strategies to help in its control.

But beekeepers are still in a race against the mitesâ€”a race that, unmanaged, wild bees have already lost.

The purpose of this article is not to discourage anyone who wants to start beekeeping. To the contrary: Beekeeping is a fascinating, deeply satisfying and remunerative activity for many people. And it integrates well with the functions of a hobby farm.

However, to enjoy its pleasures and profits, one must understand and prepare for the complexities involved. Itâ€™s not enough to buy some bees, set up a hive and collect honey.

This article appeared inÂ Hobby Farmâ€˜sÂ Urban Farm 2019 annual, a specialty publication produced by the editors and writers ofÂ Hobby FarmsÂ magazine.Â You can purchase this volume,Â Hobby FarmsÂ back issues as well as special editions such asBest of Hobby FarmsÂ andÂ Living off the GridÂ by followingÂ this link.