Control Honeysuckle While Using It to Your Benefit

Honeysuckle can be invasive and overtake native plants, but you can help control populations of the shrub with these DIY projects. 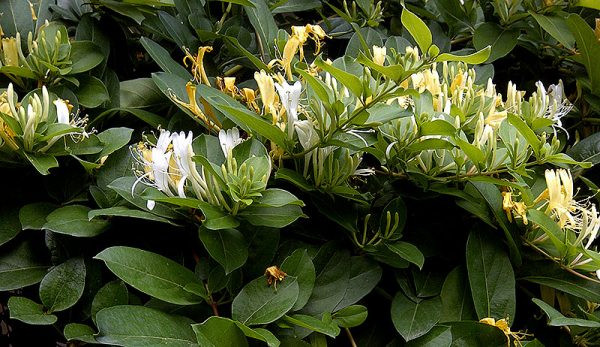 A sweet smell fills the air in mid- to late summer as we walk around the farm.Â I want to love this aroma, but, unfortunately, it makes me cringe. Why? This smell indicates a problem we have with a plant called honeysuckle, which grows fast and chokes out the native plant life we want to conserve and promote.

Honeysuckle is a wonderful smelling plant, but several species are horribly invasive in many parts of the United States:

Most come from around Asia. European Fly honeysuckle comes from Britain. All were brought to the U.S. for ornamental or agricultural purposes. The plants are shrubs that donâ€™t look much different from one another to the laypersonâ€™s eye. They have sweet-smelling flowers in white, yellow or pink that fruit into red berries. When most mature, they have twigs with a hollow core.

Birds propagate these plants when they eat the berries and spread the seeds through their droppings. The invasive, non-native species of honeysuckle tend to leaf out earlier than native species, giving them an edge to outcompete the native botanical life.

That said, just because a plant species is invasive doesnâ€™t mean itâ€™s all bad. In fact, you can use non-native honeysuckles in your kitchen and medicine cabinet. Here weâ€™ll discuss some ways to use the plants while also working to control their spread on your land.

Uses for Honeysuckle at Home

One of the best ways to put your invasive honeysuckle to work in your home is by creating home remedies. Honeysuckle has a long history of health use, and the best part about creating these remedies is that you most commonly use the flower. By collecting as many flowers as possible, you prevent berries from forming, thus stopping the spread of seeds.

Honeysuckle has dry, cooling properties, meaning itâ€™s good for conditions that generate excess heatâ€”think inflammation, fevers and infections, particularly infections of the respiratory, digestive and urinary tracts. Itâ€™s also thought by many herbalists to be an immune stimulant, and some studies have shown that it can be used to help treat diabetes and arthritis.

The same syrup that you used above for your home remedies can be put to culinary use, as well. Think about using your syrup to sweeten carbonated water or an adult cocktail, as a topping for fruit or pancakes, or to flavor a homemade ice cream or sorbet. You can also make honeysuckle jam or search for recipes for honeysuckle baked goods.

As mentioned above, honeysuckle has a most wonderful smell, so why not capture that scent for a homemade perfume? Hereâ€™s a DIY perfume found on the Mother Nature Network: Clean 1Â˝ cups honeysuckle flowers and let them soak overnight in 2 cups of distilled water. The next day, heat the flower-infused water, and then strain the water through cheesecloth, squeezing out any liquid from the flowers. Simmer the resulting water until you have about a teaspoon left. This gives you a concentrate you can use as a perfume or to scent homemade cleaning products and linen sprays.

Get Aggressive With Honeysuckle

Thereâ€™s a good chance that no matter how creative you get with honeysuckle flowers in the kitchen, you will not use enough of the flowers to stop the spread of the shrubs on your land. If this is the case, use more aggressive means to get rid of them.

For young plants, hand-pulling is an option. However, for mature plants, one of the more common ways of killing it is to cut the plant at the base and apply a glyphosate-based herbacide directly to the stump. This kills the root of the plant without posing much of a hazard to the surrounding botanical life. Itâ€™s important to do this type of work when temperatures are above 50 degrees F and when no rain is in the immediate forecast.

Prescribed burning is another option for removing an infestation of honeysuckle. This method is particularly adept at killing a large number of saplings and will injure the tips of mature plants. However, because mature plants that have not been completely killed with resprout, for a prescribed burn to be successful in areas with an abundance of mature plants, successive burns will be necessary.

Finally, researchers are studying how goats can be introduced to areas infested with honeysuckle and other types of invasive plants as a means of control. ForÂ  landowners with long-term vision for the health of their farms, this could be an option worth exploring.

If promoting native plants is a priority for your farm, looking at ways to curb the honeysuckle population is a must. But that doesnâ€™t mean you canâ€™t have a little fun while keeping the plant in check.