Coop Maintenance Is Easier With The Deep-Litter Method

Cleanliness in the chicken coop is less work when you use the deep-litter method. Plus, it's proven to keep your chickens healthier. 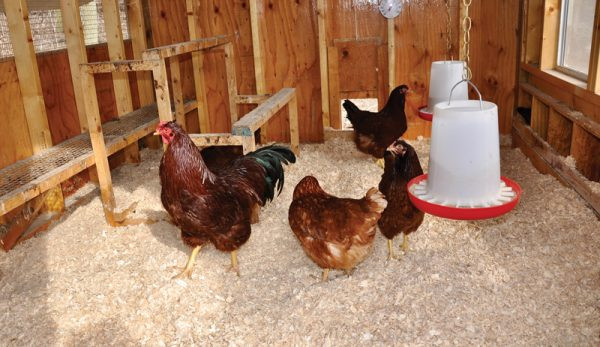 Chickens are notoriously messy, so achieving a cleaner chicken coop may seem impossible without investing lots of time. However, by following a few simple practices, you can have an amazingly ship-shape coop that only needs refreshing a couple of times per year.

The practices used to maintain a cleaner coop with less work are collectively called the deep-litter management method. In this method, you allow the droppings and bedding material to accumulate and decompose inside the coop instead of regularly scooping out and replacing the soiled chicken litter.

Although this may sound detrimental to your chickens’ health, it’s actually beneficial.

The deep-litter technique originated in Ohio in the 1940s and was an important development in poultry management because it dramatically reduced poultry disease and the labor necessary to successfully keep chickens.

It introduced a sustainable method of managing chicken litter in the coop. Many flock owners, in turn, adopted it.

However, as small flocks slowly disappeared from backyards, the practice was somewhat lost. Today, with the resurgence of backyard birds, it’s being rediscovered.

Basically, the idea is that you start with a 6-inch layer of pine shavings or other highly absorbent bedding material. Throw in chicken scratch so your chickens aerate the shavings. Then, let nature compost the litter and chicken droppings in the coop.

Just as with a garden compost pile, there are brown “pine shaving” (high carbon) and green “chicken dropping” (high nitrogen) elements that need to be managed. When the proportion of green to brown gets too large, additional pine shavings are added to the mix.

The compost gets deeper over time and eventually some should be removed. What does get removed makes great garden fertilizer.

Adding moisture and oxygen make conditions favorable for decomposition. Microbes use the nitrogen as an energy source to breakdown the high-carbon materials. And the end result is highly fertile compost.

In addition to compost, the byproducts of the decomposition process include vitamins K and B12, health-enhancing compounds and heat. According to the Food and Agriculture Organization of the United Nations, “Microorganisms thrive on the manure in litter and break it down. The microflora produces growth factors, notably vitamin B12 and antibiotic substances, which help control the level of pathogenic bacteria. Consequently, the growth rate and health are often superior in poultry raised on deep litter.”

Read more: Keep these things in mind when choosing the right chicken coop for your home.

To get the deep-litter method working in your coop, start with a 6-inch layer of a high-carbon litter material—such as pine shavings or dry, mulched leaves—on the coop floor. The finer the high-carbon material, the faster it will begin composting. If the coop floor is dirt, then a sufficient number of microbes and moisture should be available to start the decomposition process as the chickens add their droppings.

If the coop floor is wooden or concrete, then it may be helpful to introduce some active compost (adding the microbes) to jump start the process. Moisture is necessary to initiate the process too. But since chicken droppings are about 80 to 90 percent water, it’s seldom necessary to add water.

Note: If you do have a wooden coop floor, it’s a good idea to coat it with something like a protective paint (e.g., spar urethane) or cover it with vinyl flooring before implementing the deep litter method. This will protect it from slow rot.

Oxygen (or aeration) is essential for decomposition, but the chickens will help aerate the litter if you sprinkle scratch into their bedding on a daily basis. The number of chickens in the coop should be limited to one chicken for every 3 to 5 square feet of coop space in order for them to be effective aerators.

Good coop ventilation is essential in any chicken coop. However, it’s particularly important when using the deep-litter method.

Chicken droppings give off ammonia. As the proportion of chicken droppings to litter increases, the amount of nitrogen will eventually overwhelm the carbon in the mix and start generating ammonia (nitrogen + water = ammonia).

Some chicken-keepers add food-grade diatomaceous earth to their coops in an effort to prevent worms, lice or mites. However, that practice is not recommended when using the deep-litter method.

Veterinarian Melissa Holahan, creator of Goat Melk Soaps and co-owner of Chubb E Acres Farm, has been using the deep-litter method since 2010.

“It’s a great way to maintain a clean coop and reduce ammonia buildup with less labor,” she says. “One of the questions I get asked is whether to add food-grade DE to the bedding. DE is hazardous to health when inhaled and should not be used. If chicken owners are having issues with internal (intestinal worms) or external parasites (lice or mites), they should consult their veterinarian for recommendations on safe alternative treatments.”

Read more: When it comes time to clean, follow these 10 steps for a spin’n’span coop.

Once you have your bedding material in place, then it’s just a matter of monitoring the litter and making sure that everything is working properly. The amount of litter, chicken droppings, moisture and aeration need to be balanced to promote decomposition.

The chickens will do much of the aeration work. But it’s a good idea to turn the bedding at least once per week and verify that breakdown is progressing. The rate of decomposition in the coop will depend on:

Those that live in drier regions may need to moisten the litter to hasten decomposition. In wetter regions, though, it may be necessary to add litter more frequently. If you’re doing things properly, you’ll slowly see the litter turn to compost.

The coop shouldn’t smell bad and it should never smell like ammonia. If the coop smells like manure or ammonia, then add more bedding material and turn more frequently.

Once the litter depth in the coop exceeds a foot, some of the bedding is normally removed.

Many chicken-keepers just clean out enough to return the litter depth to about 6 inches. Others remove all the litter and do a thorough coop cleaning. Typically, this occurs one to three times per year in the spring, summer or fall.

Normally, keepers don’t do a clean out during the winter because everyone wants to maximize heat production and litter depth (for insulation). Just remember, if you remove all the bedding material for cleaning, you’ll want to return about 6 inches of deep-litter back to the coop so that the decomposition process can continue.

There are many different options for managing chicken coop cleanliness. However, by using the system outlined above, chicken-keepers can save time and labor. In addition, the chickens stay healthy and the coop stays clean.