Photo by Audrey Pavia Bandit doesn’t like wearing a muzzle, but it’s the only way to ensure he can’t cause damage. I love Corgis; they are my favorite dog, hands down. But they have a couple of shortfalls. They shed like mad, and they can be aggressive with other dogs. My Pembroke Welsh Corgi, Nigel, […] 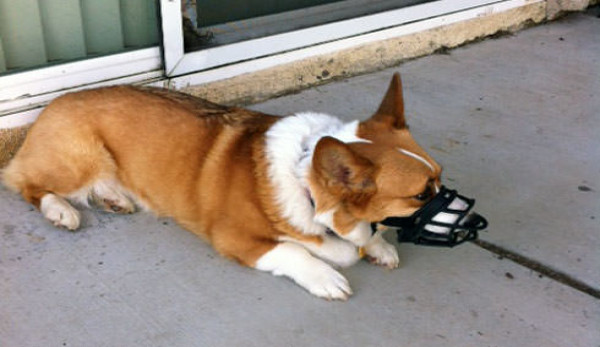 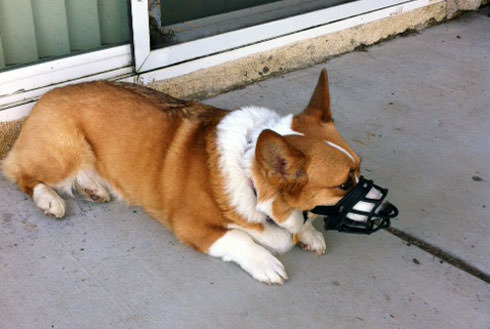 Bandit doesn’t like wearing a muzzle, but it’s the only way to ensure he can’t cause damage.

I love Corgis; they are my favorite dog, hands down. But they have a couple of shortfalls. They shed like mad, and they can be aggressive with other dogs.

My Pembroke Welsh Corgi, Nigel, has always been rather benevolent for a Corgi. He never showed any aggression toward other dogs until he was 4 years old, when he was attacked by another dog while we were out on a walk. After that, his “aggression buttonâ€ť was turned on, and he suddenly refused to take even the slightest bit of crap from other dogs. But he never started fights â€” he just finished them..

Then, a little more than a year ago, my friend Michelle moved in with me, bringing her Pembroke, Bandit. Bandit is the sweetest, cutest Corgi in the world. But he has a big problem with other dogs.

At first, he and Nigel were friends. They hung out in the backyard together, barking at passersby and taking sunbaths. But one day, while they were in the house, Nigel growled at Bandit for some reason. After that, nothing was the same..

Tension began to grow between the two of them, and one day, Bandit attacked Nigel with the fury of the Spartans. It was a horrific fight, and it took two of us to break it up. Ever since then, Bandit wants to kill Nigel whenever he sees him..

Knowing the relationship between the two dogs can never be repaired, we have taken to keeping them separated. When Nigel is loose in the house or the backyard, Bandit is in Michelleâ€™s room. When Bandit has free reign of the backyard, Nigel is in the living room or in my bedroom. We work hard to make sure the two are never in the same place at the same time..

The other day, Michelle was in the living room working on her laptop. I had been in my room and didnâ€™t realize Michelle had let Bandit out of her room to walk around the house. Nigel was out in the backyard. I innocently wandered through the living room and opened the back door to let Nigel in. As I was opening the door, Michelle yelled “no!â€ť, but it was too late. Bandit was at the door in a flash. He dashed through the opening and jumped on top of Nigel. And the fight was on..

Itâ€™s hard to think during a dogfight, and Michelle and I managed to do everything wrong. I reached down and grabbed Bandit by the collar, which was a dumb thing to do, but it had always snapped Bandit out of attack mode in the past. But this time, as I pulled Bandit away, the collar slipped off his head. Michelle picked Nigel up to get him away from Bandit while I frantically tried to grab him. But before I could reach him, he leapt up at Nigel and inadvertently bit Michelle on the leg..

I eventually seized Bandit and threw him outside, but the damage was done. Michelle was on the verge of tears, and talking about finding a new home for Bandit. I came up with another solution: Bandit doesnâ€™t leave his room without wearing a muzzle..

Bandit hates his muzzle, but he has to wear it from now on when heâ€™s out of his room. As a back up, I also bought a megaphone to blast a loud noise in the event that Banditâ€™s muzzle comes off should he attack Nigel. Michelle and I are determined to find a way to make this living situation work, one way or another.