Photo by Judith Hausman Salmon and corn make this chowder wonderful. By early fall, the local corn has gotten tougher and starchier, but there were still piles of irresistible, pale-green ears at the farmers market this weekend, so I made my first soup of the new season, a chunky corn and salmon chowder, full […] 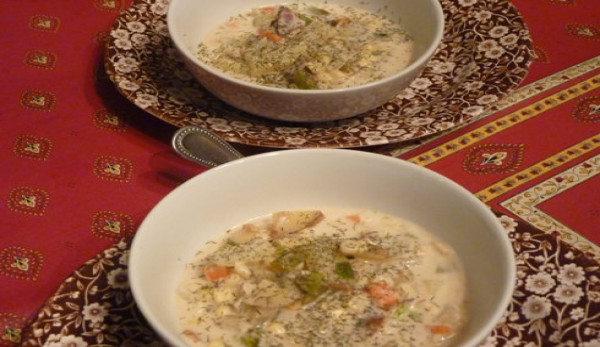 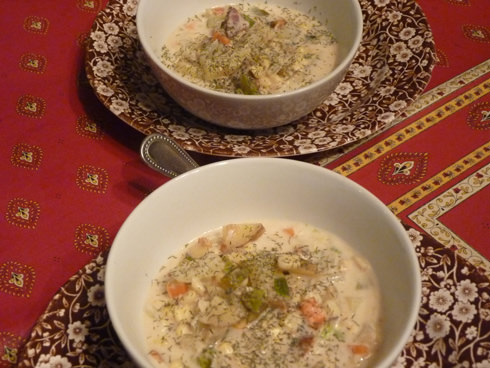 By early fall, the local corn has gotten tougher and starchier, but there were still piles of irresistible, pale-green ears at the farmers market this weekend, so I made my first soup of the new season, a chunky corn and salmon chowder, full of season-straddling vegetables. I like this version because of the hearty flavors and because it does not contain any cream.

Of course, you can edit this recipe into a vegetarian version (olive oil rather than bacon; skip the salmon; use a little smoked paprika) but the bacon and smoked salmon really distinguish it. Use unsmoked salmon, leftover cooked or canned or fresh, if it is more readily available. You will need to flake the salmon into chunks with a fork.

I like the dill garnish here, but the feathery fennel fronds are tasty and pretty when chopped, too. You can also use a light sprinkle of celery seeds on each colorful bowlful.

Potatoes are required by definition to make this a chowder, and you should be able to find fingerlings, yellow-fleshed or red-skinned new potatoes in season. You can serve the chowder with hot biscuits or cornbread, but it really is a meal in a bowl all by itself.

In a large pot, gently fry the bacon pieces. When they are just starting to crisp, add in all the diced vegetables, except the corn kernels. Toss and cook for about 7 to 10 minutes over low heat until the fennel and potato begin to soften a little.

Sprinkle the mix with the flour to coat. Then add in the milk slowly and simmer on low heat until the potatoes are cooked through. The liquid will thicken; add more milk, broth or water, if necessary.

Next, add the corn, salmon and remaining seasonings, cooking for 5 to 7 minutes more.

Judith Hausman
As a long-time freelance food writer, Judith Hausman has written about every aspect of food, but local producers and artisanal traditions remain closest to her heart. Eating close to home takes this seasonal eater through a journey of delights and dilemmas, one tiny deck garden, farmersâ€™ market discovery and easy-as-pie recipe at a time. She writes from a still-bucolic but ever-more-suburban town in the New York City ‘burbs. Corn and Salmon Chowder]]>