Photo by Judith Hausman If you planned correctly, you still have some summer corn frozen and ready for pudding! On the corn continuum, there’s corn pudding, then spoonbread, then cornbread. The first one, for which you have a recipe here, doesn’t use cornmeal and is as soft as a flan. It could almost become a […] 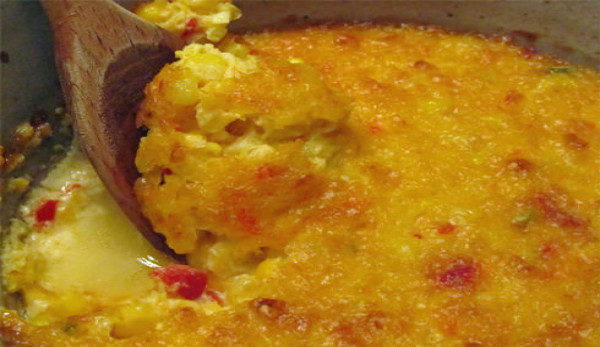 If you planned correctly, you still have some summer corn frozen and ready for pudding!

On the corn continuum, there’s corn pudding, then spoonbread, then cornbread. The first one, for which you have a recipe here, doesn’t use cornmeal and is as soft as a flan. It could almost become a soufflé if the eggs were separated and the whites whipped. The next, spoonbread, has more body but is still usually scooped rather than cut into squares. It contains both corn and cornmeal. Cornbread is a sturdy quick bread, made of cornmeal and often baked in muffin or cast-iron, mini-corn-shape pans.

The richness of any of these can be scaled up or down easily, depending on the amount of fat used and the milk product chosen. I happened to have cream in the house but the recipe is fine with just milk. I used butter but bacon fat is often used too, or even oil, especially in cornbread.

I also used wonderful summer corn from my freezer, which I whirred in the food processor a bit (along with a few tablespoons of a red pepper I also froze in August). Processing gives the corn a texture closer to grating it off the cobb, which you’d do with fresh corn in season. You might want to experiment with adding a little smoked paprika, curry, chopped fresh cilantro or even some cheese.

The rest of the recipe couldn’t be easier. Don’t skip the water bath when you bake it; it helps assure the custard-like texture of the pudding.

Chop the corn and red pepper briefly in a food processor. Heat the milk (or cream) along with the butter; don’t allow to boil. (I just use the microwave). Beat in the eggs and seasoning. Pour into a greased dish, which you have placed in a pan of water. Bake for about 90 minutes or until set and firm.

Judith Hausman
As a long-time freelance food writer, Judith Hausman has written about every aspect of food, but local producers and artisanal traditions remain closest to her heart. Eating close to home takes this seasonal eater through a journey of delights and dilemmas, one tiny deck garden, farmers’ market discovery and easy-as-pie recipe at a time. She writes from a still-bucolic but ever-more-suburban town in the New York City ‘burbs. Corn Pudding]]>