Could Mystery Slugs Be Decimating Your Garden?

Slugs like to keep a low profile, but by paying attention to a few clues, you can get a slug problem under control. 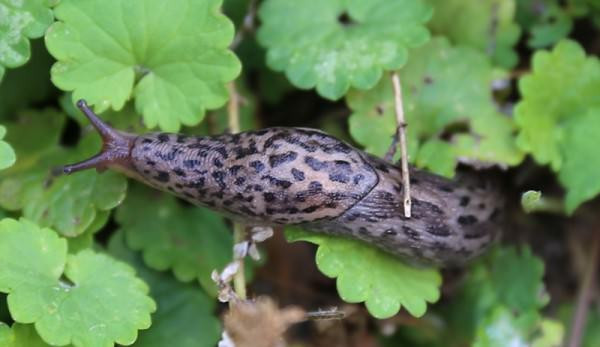 Just the word â€śslugâ€ť tends to conjure disgusting mental images of slimy, gelatinous creatures that leave a trail of garden destruction and glistening mucus in their wake. The more you know about slugs, the better chance you have of controlling some of the damaging pest species that can make an entire meal of the new seedlings in your vegetable garden.

Like your friendly octopi and squid, slugs are classified as mollusks. Along with snails, their closely related cousins, theyâ€™re considered terrestrial gastropodsâ€”slugs are basically snails that have reduced shells or no shell at all. Soft-bodied creatures, they have a thick covering of mucus all over their body and two pairs of tentacles, the larger pair for the eyes and the smaller pair for smell and touch.

Slugsâ€™ mouths contain unique rasping parts used to scratch irregularly shaped holes in tender leaves and flowers while feeding. The rough irregular shapes of the holes in vegetation are a good marker of slug damage. They enjoy eating a wide range of cultivated vegetable and fruit plants, but itâ€™s the tender seedlings that most slugs will tend to feed, often causing major issues for these crops.

Hot On The Trail

Slugs have no legs and move around their environment with the help of a single muscular foot that secretes mucus, allowing the creatures to traverse a wide range of terrain. Everywhere a slug goes, it leaves a trail of mucus behind, which it uses to help return to desirable feeding locations. When that mucus dries it takes on an opalescent silvery sheen that allows you, the observant gardener, to detect its presence.

To survive, slugs need cool damp environments. Because of this, most slug species are nocturnal in order to take advantage of the cooler, humid nighttime conditions. To avoid the heat and sun of the daytime, they take shelter under rocks, yard, leaf debris and planters, making them hard to find. One of the best ways to gauge a slug population is to take several nightly censuses in your garden with a flashlight to catch the creatures when they are most active.

There are hundreds of terrestrial slugs species found in North America. Most are native species, but with increased globalization, many invasive slugs are threatening to take hold or have already. Different species of slugs vary in color, size, and markings with most taking on tan, brown or yellowish camouflaged earth hues. One of the most common slugs found in the garden is the aptly named gray garden slug (Deroceras reticulatum), which is a well-established pest species in North America, having been introduced from Europe centuries ago. The pesky grey garden slug grows from 1 to 2 inches long and has various colorations that range from yellow or white to nearly black.