Country Living in Midsummer: Is This Really Worth It?

This country life is definitely not like a pretty picture in a magazine, but we conclude that we wouldn't have it any other way. 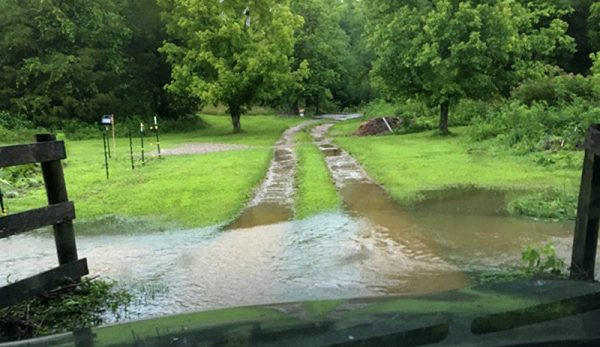 Midsummer naturally tests your grit here in Kentucky. A far cry from the dreamy bucolic imagery that beckoned us into the country lifestyle, in real life, itâ€™s hot, itâ€™s humid, itâ€™s buggy, and anything can happen. Unexpected weather can leave you scrambling, equipment can fall apart at the most inopportune time, and poison-ivy rashes and chigger bites can find the most unsavory of places.

Midsummer began rearing its ugly head in the past couple of weeks when the heat index topped 105 degrees F. The sun was so hot and the air was so thick, just opening the door to walk outside made your face melt. Summer thunderstorms, which should offer bits of respite, only intensified the conditions. One particularly notorious storm sent flood waters raging. I came home that day to find a river flowing over our driveway (see the photo above) and trees violently swaying back and forth, nearly touching the ground with their branches. We and our neighbors have cleaned up toppled trees and repaired roads and driveways from that southern-style monsoon for nearly two weeks.

After some soul-searching, Iâ€™ve decided that things in the garden are doing OK despite the wicked weather. High heat indexes donâ€™t mix well with a 9-month-old, so we’ve stayed indoors except to get in a pool. As a result, weeds in the garden grew well above knee height. A garden-turned-jungle always leaves me feeling a little overwhelmed, but after a couple of sweaty days of weeding, we unearthed vibrant crops well on their way to producing fruits.

Weâ€™ve already been blessed with armloads of zucchiniâ€”as if a zucchini plant would have it any other way. Itâ€™s a yellow variety called Zâ€™oro, and the plants have humongous upright leaves that boost your confidence, making you feel like you are doing something right. The little one is in loveâ€”this might be her favorite food next to watermelon.

The Thai and Genovese basil I planted among the asparagus to keep asparagus beetles at bay are doing pretty well. Although they donâ€™t seem to be growing as fast as the basil in the rowsâ€”perhaps because the asparagus ferns are somewhat shading themâ€”they produce enough basil for us to use fresh and to dry. Theyâ€™ve yet to be sought after by Japanese beetles, which isnâ€™t as true for the row basil, so Iâ€™ll count that as another win. Once the plants get a little bigger, Iâ€™ll consider making pesto, but for now, theyâ€™re not ready for that aggressive of a harvest.

My tomatoes are my No. 1 crop this year, and Iâ€™m still waiting for fruits to ripen. I see plenty of green tomatoes on the plants, and except for one plant with some blossom-end rot, which could be attributed to the 4 inches of rain we received in one hour during that dreaded monsoon, things look pretty good. Iâ€™ve experimented with trellising the tomatoes using the Florida weave instead of cages, and the tomatoes are still standing, though Iâ€™m already considering modifications for the next go-round. Also, the other night, while suckering and tying up plants, I found a couple ofÂ parasitized hornworms. Iâ€™m glad to know our insect friends are hard at work keeping pests at bay, even when weâ€™ve been hibernating in the A/C.

The one little obstacle we encountered this past week concerns our irrigation system, which is a well pump powered by solar energy. Weâ€™ve hardly had to use it thanks to a pretty wet spring and early summer, but as things have dried up, we turned on the hose only to learn that the cistern is dry. As it turns out, the well pump hasnâ€™t been pumping, so weâ€™re investigating that problem while hauling buckets a quarter mile from the spigot near the house to the garden in order to water our thirsty plants.

This time of year can be tough, mentally and physically. As you pull weeds under the sweltering sun and scrape gravel that had washed away back onto the driveway and cut up giant trees that have fallen, your mind begins to question whether this is all worth it. Was it worth trading in our cushy suburban lives for all this hard work? But the answer is always yes. When you watch fireflies in the evening with your family or cook a meal with all the things you grew in your garden or listen to the birds chirp as you take your first sip of morning coffee, itâ€™s a big resounding yes. Our country life might not resemble the ones in photographs, but it is a fulfilling one, and to know weâ€™re just laying the groundwork for our future here is comforting and exciting.