Leaving garden soil bare can contribute to erosion and the release of carbon into the atmosphere, but planting cover crops can do a lot of good. 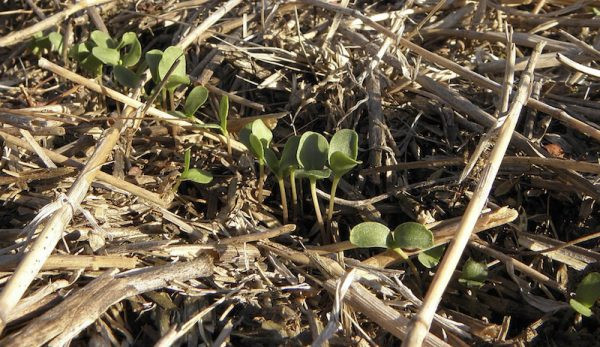 After harvesting the last few beans, tomatoes and peppers, I usually just yank the plants, rake up the debris, and toss it all in my super-hot compost pile. As for my garden beds? They remain mostly bare until spring.

I’d always assumed cover crops were for large-scale farmers or people who grew heavy feeders like corn. But the increasing numbers of extreme weather events and the current climate crisis we’re all facing have changed my mind.

Cover crops afford all sorts of benefitsŌĆöeven for small-time growers like me. They prevent soil erosion and crowd out weeds. Cover crops also boost soil fertility, help to conserve moisture, and improve the soil’s overall structure.

So, even for my relatively small garden plots, I now see value in planting both green manuresŌĆöcrops like peas or buckwheat planted during the regular growing seasonŌĆöand more traditional cover crops like winter rye.

And especially important now? By covering the soil with certain types of plantsŌĆöwhether between successive plantings of crops or between entire growing seasonsŌĆöwe can trap carbon. Sequestering carbon in the soil can keep it from escaping into the atmosphere.

And keeping rogue carbon in check can help to mitigate the planet’s rising temperatures.

ŌĆ£If you grow intensively in order to cram a lot of production into a small space year after year after year, your soil health and fertility are going to go down,ŌĆØ Certified Organic Inspector Gary Ogle explains. ŌĆ£So, if you have enough land that you can always practice good crop rotationŌĆöwhich not only increases soil health but also resists disease and pestsŌĆöthen you are off to a really good start.ŌĆØ

But if you don’t have acres and acres of land at your disposal?

ŌĆ£Taking the time to plant green manuresŌĆöeven though you might be using [part of] your land to grow something you’re not going to sell and you may just end up tilling underŌĆöyou’ve got to remember that you’re growing that crop in order to build your soil tilth,ŌĆØ Ogle says.

ŌĆ£That’s going to give you a better crop the following year. It’s an investment. It can be a challenge for many people, but it’s definitely worthwhile.ŌĆØ

Read more: These cover crops build and protect soil in a hoop house.

ŌĆ£On our own trial farm, we’ll grow an early crop of buckwheat just to break up the soil and to control weeds,ŌĆØ he says. ŌĆ£Often we will follow that up in September with a crop of winter rye, so we have something green holding the soil in the winter.ŌĆØ

ŌĆ£In other areas, we’ll often put in our own custom mix,ŌĆØ Ogle continues. ŌĆ£We’ll put in beans and peas and other legumes, such as alfalfa and clover, and we’ll till that in.ŌĆØ

Depending on your soil’s specific needs, you can customize your own cover crop mix, too. Field peas, hairy vetch, and white clover expertly fix nitrogen in the soil. Crops like mustard and radishes will help break up heavily compacted areas.

Cornell University developed this online tool with New York-based growers in mind. Still, it could be useful if you live in a similar climate zone or you simply want to identify potential cover crops according to different soil management goals.

Read more: Check out this video for tips on tuning up a reel push mower.

Many cover crop-related resources mention the need for mowing and tillingŌĆöfirst to prepare the bed for planting and, later, for working the cover crop vegetation back into the soil. Rather than break out my carbon-emitting, gas-powered gadgets to prepare the areas to be planted, I’ve instead covered the spaces with cardboard.

In a week or two, the cardboard will smother any vegetation below. Then I can rake the soil and direct-sow my cover crops. I’ll keep the seeded beds moist until the new crops are established.

Then, in early spring, I’ll cut it down either with my reel mower or scythe. Finally, I can let the spent vegetation serve as mulch above ground or hand-dig it back into the soil a month or so before planting my early spring garden.