Cover crops offer a variety of benefits during different parts of the year, from improving soil health to suppressing weeds and more. 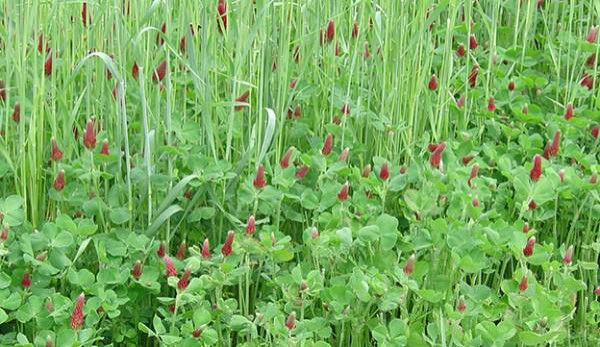 Cover crops are a powerful ally for the farmer. Whether you are growing cash crops, market gardening or orcharding, cover crops help fill the gaps between when your primary crop is growing, leafing and producing.

Cover crops have a variety of uses, across different seasons, depending on your specific goals. Let look at a few cover crop options and how they can be used to boost your farmâ€™s bottom lineâ€”healthy soil!

First of all, it is important to know the power of different cover crops in different seasons. A cover crop that is seeded late in the year can help stabilize the soil over the winter and prevent soil erosion in the spring.

These late-sown cover crops also protect soil life by giving subterranean organisms a protecting blanket against the winter cold. Also, the organic matter provides them with food and habitat.

There are two types of cover crops for fall seeding and overwinter management of your garden plot or field.

First, we have cover crops that winter-kill, such as a mix of oats and peas. This traditional cover crop mix will do well in the cooling and shortening days of fall if planted after a summer crop.

Frost in late autumn and early winter kills these crops, creating a protective mat, rich in organic matter, over the soil surface.

When you follow a winter-kill cover crop with an early crop in spring, the dead cover crop material easily incorporates into the garden plot, improving the soil.

Read more: Using cover crops in the garden has practical and environmental benefits.

The second fall/winter cover crop is one that overwinters (meaning it survives the winter), such as winter rye. Winter rye will not only grow in very cold conditions, but it will also begin to regrow again in springtime.

These cover crops work best in crop rotation before a late-planted crop, such as tomatoes or squash. That way, you can take your time to kill back the cover crop before planting.

Here’s a tip for working with winter rye: Roll the rye down, reform your Permabed over the top so the rye rots in the bed’s core, then simply roll out a weed barrier over the whole plot and plant your Zucchini, tomatoes or other warm-loving transplants right through the weed barrier.

There are also cover crops that are great for summer production, such as buckwheat.

I love to use buckwheat to smother out weeds. Because buckwheat has a broadleaf and isnâ€™t seeded until frost is gone, I can prepare the soil properly for a solid summer seeding to smother summer broadleaf weeds.

Buckwheat also adds nutrients to the soil that it mines during its growth. I put buckwheat into my crop rotation before late planted crops, such as garlic. The garlic loves the extra weed suppression because it is a narrow leaf crop.

I’ll also use it with a late planting of winter spinach.

Read more: What exactly is a Permabed? We explain.

The last cover crop we will look at is clover.

There are many clovers, and each has a different role to be had. And in addition to being a great cover crop, clover provides habitat for bees and other beneficial insects.

As a legume, clover helps fix nitrogen into the soil. It is also a robust grower and can add organic matter to the soil.

I like to seed dwarf white clover in my orchard paths, where I can grow and mow the paths for management. I also like to under sow crops like squash to a clover and rye mix, allowing the clover and rye to take over after harvesting.

Because clover is a biannual, it will re-establish the next year. Let it grow and it will fix nitrogen for the entire summer the following year.

Red clovers are very tall and robust, with a tap root that can help loosen soil. In the earlier years of building new garden soil, it can serve well as an initial land improvement crop.

Crimson clovers do well with less direct sunlight. Under sow crimson clover for fast transitions from garden crop to cover crop field. It can also help out with orchard management.

There are a wide variety of cover crops available, with various benefits to your soil’s needs and uses. So, go aheadâ€”try some cover crops in your growing space to improve your soil health.