The Triple Benefit Of Feeding Sheep With Cover Crops

In the right situations, farmers, sheep and land can all benefit from sheep grazing on cover crops. Some mixtures make for better forage than others. 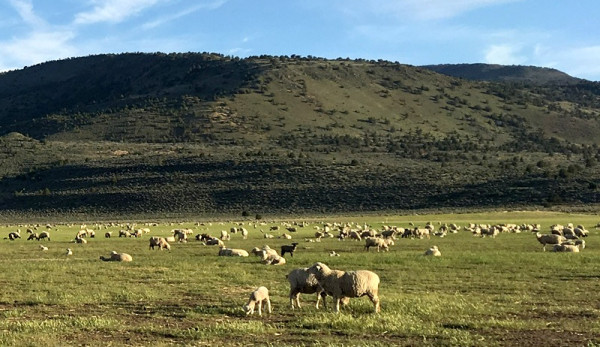 Providing nearly free livestock feed is one of several benefits of sowing cover crops. These plants also compete with weeds, protect the soil surface, add soil nitrogen and conserve water while improving drainage. All of this makes cover crops popular, but thereâ€™s more to consider when it comes to sheep feed. Ruminant systems can be delicate and ewes pregnant in late fall and winter, a critical time for good nutrition.

How Does Cover Crop Grazing Work?

Geography and season determine when cover crops are sown. In the Midwest, this is usually August or September, but as late as October or November in milder parts of the West.

Grazing begins after cover crop growth ceases, when plants no longer take up nutrients from the soil. Per usual, sheep can be contained by portable electric fence and managed at a stocking rate that makes sense for the land, an average of about 16 to 24 sheep per acre.

Sheep can graze cover crops through light snow, but winter is not the only time cover crop grazing has value. Cover crops must eventually be terminated to enable vegetable and grain crops to grow. With conventional practices, cover crops are usually removed with tractor tillage or herbicide application. Both cost money and come at the expense of soil health.

Cover crop grazing creates opportunities for mutually beneficial partnerships between livestock and crop farmer. The crop farmer wants the soil to better retain nutrients and increase future crop yields. The sheep farmer wants inexpensive, nutrient-dense, parasite-free forage as well as the possibility of resting their own, usually grazed pastures. A sheep farmer might not have much land for cover crops, while a crop farmer might have land that would benefit from cover crops as well as grazing.

In this scenario, the sheep farmer can provide the seed and fertilizer, while the crop farmer does the seeding and allows the sheep farmer access to land. People, land and sheep all benefit.

Which cover crops are best?

Farmers need to consider a few factors: soil fertility and condition, yield, and nutritional value to sheep. Look at whatâ€™s going on with the soil, what you want the cover crop to do, and which cover crop might do those things while feeding sheep.

Brassicas & Oats: Best Of Both Worlds

While variable, sheep grazing cover crops shows increased economic returns and diversity. At this point in the year, many cover crops have already been sown and grown. Still, itâ€™s worth planning for next season, asking Santa for field pea and brassica seeds for your stocking, and seeing whether a neighbor has sown cover crops your sheep might be able to graze.