I’m going to be in a mini-documentary because my mom is a crazy goat lady! We goats knew that all along. Now because of us, she might be famous. 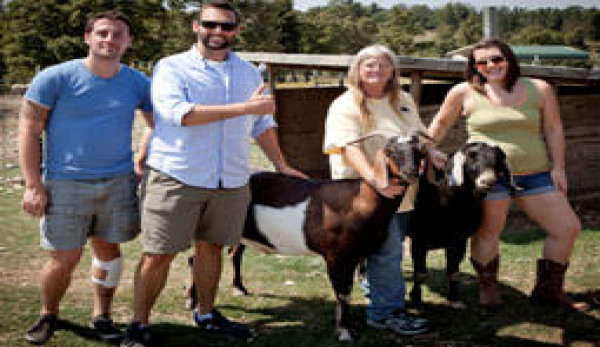 I’m going to be in a mini-documentary because my mom is a crazy goat lady! We goats knew that all along. Now because of us, she might be famous.

See, my mom and dad eat a lot of yummy vegetarian pizzas from a convenience store called Casey’s in Thayer, Mo. Mom heard she could get a coupon for a free pizza by entering Casey’s Famous People contest, so she nominated herself for being a crazy goat lady who adores goats and keeps a potty-trained goat (baby Milo) in her house. Imagine her surprise when Casey’s emailed her saying she is one of three national finalists. Mom thought it was a joke and emailed back to ask if it was for real. It was. Wow!

They chose Mom because she writes to support us animals instead of using her money to buy conventional things and because of Milo—they’d never heard of a house goat before. So they sent three nice people from the Barkley ad agency in Kansas City, Mo., all the way here to make a mini-documentary about us. I got to demonstrate how I use the laptop to write my blogs. Tumnus drank a beer—he had a tummy ache and the nice people from Barkley had never seen a goat drink beer before. Milo stood on the couch with Mom while she read him a story called “The Three Billy Goats Gruff,” and little Spike sat on Dad’s lap during the interview. It was fun!

See us in the group picture? That’s Uzzi and me posing with (from left to right) Josh Dubois, Dustin Schirer, Mom and Blair Vance. I was a really good boy and didn’t pee on anyone!

This week Dustin, Josh and Blair are going to Iowa to film the other two finalists, then they’ll assemble their footage into short mini-documentaries and post them to Casey’s public Facebook page. Visitors will vote for their favorites and the grand-prize winner will get $5,000! Josh asked Mom what she would go if she wins the grand prize, and she said, “I will use it to feed more animals.” She means animals like our rescued horses, Spike and Modo (Mom changed his name from Morag to Modo), and other animals people don’t want and that they throw away.

So when the videos are ready for viewing, please go see my studly self in action and vote for our crazy goat lady mom. I’ll let you know as soon as the video goes live!