Christie Birchfield from the Georgia-based Birchie's Hobby Farm tells us about learning beneficial life lessons from gardening and her Crested Cream Legbar chickens. 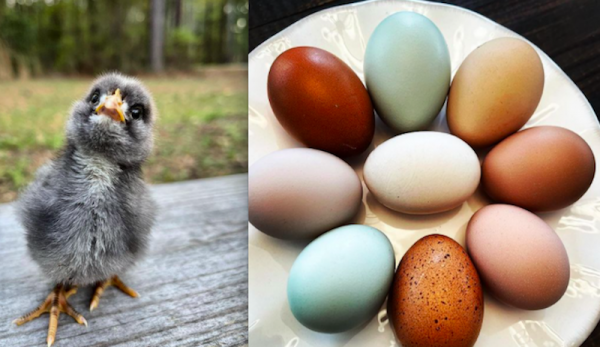 “I think for me the desire to have a hobby farm stemmed from two places,” says Christie Birchfield from Birchie’s Hobby Farm in Georgia. “First, I love animals, and getting to combine that love with farm animals that are also beneficial to my family just made sense. My grandmother and an aunt had amazingly green thumbs, and I think that is the second place my desire to have a hobby farm grew from.”

Since starting her hobby farm, Birchfield’s lot has grown to include 29 chickens, bees and a productive garden that produces corn, pumpkins and beans. The flock of chickens also includes some particularly eye-catching Crested Cream Legbars.

We spoke to Birchfield about the daily joy of running a hobby farm and learning from bee behavior. We also got the details on the venture’s resident star goat, Poppy.

Starting with One Cucumber

Birchfield says that the gardening aspect of her hobby farm sprouted from a sole cucumber.

“I grew one cucumber, but my husband still believed that I could become a gardener and build me a large, gated, raised bed garden,” she explains. “We now have lots of things growing this year: tomatoes, eggplant, beans, cucumbers, zucchini, squash, melons, carrots, pumpkins and corn.”

“I am absolutely fascinated by the bees and learning so much by watching them and reading everything I can,” says Birchfield, talking about the decision to add bees to her hobby farm.

“I think the most fascinating thing that I’ve noticed about their behavior is just how harmoniously they work as one hive, each doing what they are built to do and completely focused on their common goal,” she adds.

“Apart from our hobby farm, I have a career in human resources. I’ve been helping build teams, coach teams and mediate conversations during times of conflict for almost 30 years. I think we could all learn a lot about team functions if we modeled the bees’ focus and ethic.”

Getting to Know Poppy the Goat

One of the stars of Birchie’s Hobby Farm is a young goat named Poppy.

“She is the social butterfly,” says Birchfield. “Poppy is very talkative and attentive. She is especially bonded to my husband but follows the rest of us around, too. She yells when she sees you and will keep talking until you have acknowledged her and given her head and ear scratches.”

Read more: Thinking about getting goats? There are a lot of reasons to add some to your farm!

“Our one adult rooster is also a Crested Cream Legbar and he is a beauty,” she adds. “He has proven to be a watchful and very attentive rooster for the flock.”

Gaining a Sense of Perspective

Birchfield says that she appreciates the way that running a hobby farm has given her the opportunity to learn new life lessons.

“Farm life isn’t all baby animals and picture-worthy staged shots,” she explains. “It’s hard work and can often be devastating work.” She adds that she went through a heartbreaking experience when one of her original flock hens, Brigitta, passed away last year.

“Running a hobby farm has helped me have perspective on things that I thought were tough before,” she says. “I realize that I can—we all can—do really hard things and let them grow us in the process.”