The Crevecouer chicken breed is primarily used for exhibition, though it was originally developed for meat. Crevecouer hens are also respectable layers of medium-sized, white eggs. 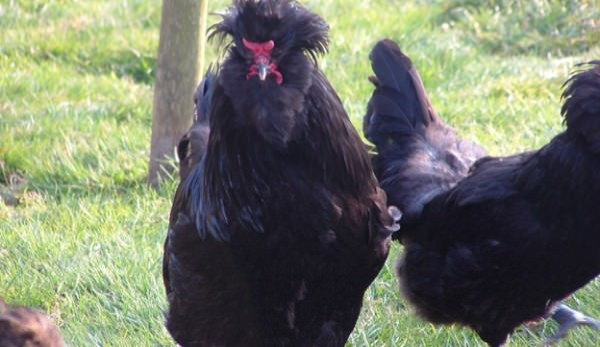 Use: The Crevecouer chicken breed is primarily used for exhibition, though it was originally developed for meat. Crevecouer hens are also respectable layers of medium-sized, white eggs.

History: The Crevecouer is an elaborately crested, muffed and bearded chicken breed developed in the town of CrĂ¨ve-Coeur Ange near Normandy, France. Little is known about the origins of the breed, but French poultry historians believe it was developed during or before the 17th century by crossing crested Polish chickens with the old-time, common chickens of Normandy. Crevecouers, in turn, were most likely used in developing the French Houdan and Faverolle chicken breeds. The Crevecouer chicken breed was admitted to the first volume of the American Poultry Associationâ€™s Standard of Perfection in 1874.

Special Considerations/Notes: Crevecoeurs are active but friendly chickens that do well in confinement. They can also free-range but are poor foragers. The breed is heat tolerant; however, due to their fancy plumage, the chickens are fair-weather fowl, somewhat delicate and require adequate protection when it rains or snows. The Crevecoeurâ€™s name means â€śbroken heart.â€ť Itâ€™s listed as Critical on the American Livestock Breeds Conservancyâ€™s Conservation Priority List.