Listen to Crickets for Clues About Your Environment

"Crickets" is often slang for "boring," but real crickets tell us a lot about what's happening through the sounds they do—or don't—make. 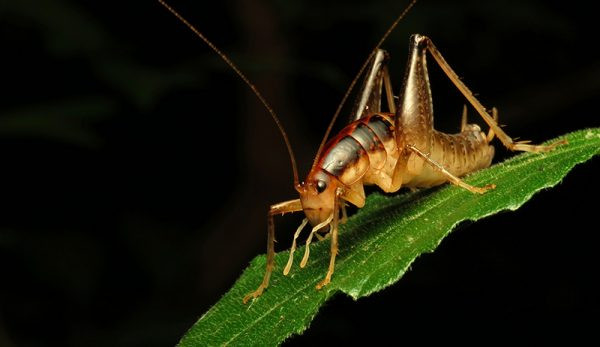 People refer to the sound of crickets as synonymous with no response. The background singing of crickets is so common, it’s as if they are everywhere, all the time, and we hear them only when all else quiets down. Oddly, I’ve been in Kentucky for six years and haven’t heard crickets much at all in my time here. Not like the incessant singing of crickets I remember from my childhood in Texas. Here, we have the pulsating buzz of cicadas and the enunciated ka-ty-did of katydids. But the chirruping of crickets? Not so much. The crickets around here are seen but not heard, and they’re hardly even seen. That is, until furniture is moved.

A wooden shelf I moved from a dark corner near a cat food bowl and some house plants revealed a large colony of pale crickets silently inhabiting my dining room as their own. I’d occasionally seen one or two hopping randomly in the evenings, and I quickly caught them and threw them outdoors. I had no idea that hundreds were hiding under the shelf. The only clue to this silent infestation was traces of frass they left on the wall and floor. They didn’t do any damage. Even in their surprising abundance, these gangly legged hunchbacked insects seemed more clumsy than threatening.

Why didn’t I hear these crickets singing? Because they were a different type of cricket called a camel cricket, also called the spider cricket or cave cricket. Because they are wingless, they also lack the ability to rub wings together to make sounds. Some 27 different types of crickets live in my area of the southeast, and about 900 species exist worldwide. Where I live, the species are generally grouped into field and house crickets, tree crickets, mole crickets and cave crickets. The names give clear reference to where they live and their habits.

It turns out I’m not the only one with a camel cricket colony. A few years ago, researchers in North Carolina worked with citizen scientists to learn more about the distribution of an introduced species from Asia. Households across North America reported these camel crickets being in their houses. This was surprising because it was previously thought the invasive Asian crickets were isolated to commercial greenhouses, but nobody had looked too closely at the crickets in their basements. Apparently the Asian crickets have escaped from the greenhouses and might be displacing native ones. They are quite fond of basements, relishing the moist, dark nooks and crannies of the built environment. (To keep them out of houses, it is recommended to seal cracks around foundations, siding and doors.) I don’t know whether the lack of summertime stridulations in Kentucky should be blamed on the invasion of exotic camel crickets, but I have my suspicions.

Why pay attention to crickets, those innocuous background singers? In my case of finding a cluster of crickets living in my house, it was a clue that I need to clean up spilled cat kibble, pay closer attention to the health of my houseplants, and make sure there’s no damp wood in my floorboards. Understanding an animal’s habitat is especially important when you share that habitat. Rather than reacting by waging war on the invaders, I thanked them for pointing out some neglected housekeeping (after I sucked them up with a handheld vacuum and released them in the wildest corner of my backyard). Crickets of all kinds are omnivorous scavengers who do a lot of cleaning up in the natural world. They even eat each other, so population control might have been handled internally if I hadn’t intervened.

Crickets generally don’t cause destruction to agricultural crops. In fact, field crickets are believed to be good weed suppressors, especially of crabgrass. Not only are they important decomposers of plant and animal matter, these prolific insects are food for birds, turtles, toad, fox and many other animals in the food web, if they don’t eat each other first.

As for the songs of the crickets, try using them as nature’s thermometer. Count the number of chirps a male field cricket (the loudest, proudest stridulator) makes in 13 to 15 seconds. Add 40 to the total, and you’ll have the temperature in degrees Fahrenheit, approximately.