How To Treat Crooked Toe Disorder In Chicks

Crooked toe disorder is not life threatening, but following these treatment steps can mean an easier adult life for your bird. 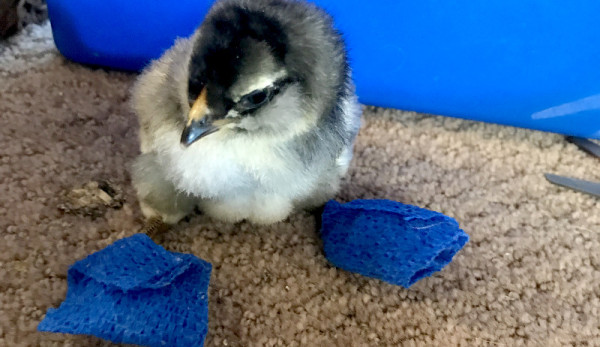 My neighbor Grace texted me the other night, very concerned about her week-old Blue Orpington chick. The little fluff had strolled through some droppings and, when she went to clean its feet, Grace noticed something amiss. “Worried about it. Both of its middle toes need help,” she messaged me. Could I help? Shortly after, the chick was on my exam table, happily peeping and oblivious to the fact that two of its tiny digits were slightly curled to the left, banana like. The baby blue exhibited a classic case of crooked toe.

The Condition And Its Causes

Crooked toe is a poultry foot disorder characterized by one or more toes curving sideways. It can affect one or both feet, and the curve can vary from very gentle to pronounced and acute. Because of this curvature, the afflicted chick stands and walks on the side of these toes. According to the Animal Sciences and Industry Department at Kansas State University, three to five out of every 100 chicks suffers from crooked toe. The condition manifests as early as one week of age.

While genes can play a factor in causing crooked toe, especially if a chick’s bloodline is inbred, several environmental factors can also lead to this condition:

Crooked toe is benign at best and bothersome at its worst. Left untreated, crooked toe does not cause crippling or even limping. The chick simply becomes accustomed to its toes being curled sideways and compensates. As an adult, it might encounter difficulty digging and might not be able to perch due to the way the toe joints align, but it should be able to live a full and happy life. Crooked toe is also easily treated if caught early in a chick’s life. In all the years I’ve raised poultry, I’ve encountered crooked toe three times: once with a Polish chick, once with a Wyandotte chick, and once with a Black Copper Marans chick. The Polish and Wyandotte wore little “chick booties” to correct the condition and, in a week’s time, both were healed. The same could not be said for Nestle, our Marans chick. She was a feisty pullet and continually found ways to pull off her booties. In the end, we let her have her way. You’d not have noticed that she had a foot disorder by watching her scamper around with her flock, until it was night time, when she bedded down on a comfy pile of shavingsâ€”she could not wrap her right foot around her coop’s roost.

The best time to treat crooked toe is when it first appears, usually in the first or second week of a chick’s life. The soft tissues in a chick’s foot are still growing and developing and, when braced in a chick bootie, crooked toes usually straighten well and remain corrected. To construct a chick bootie, you’ll need the following:

Building And Applying A Chick Bootie

Choose a quiet location with few distractions as the place to treat your chick. A busy, bustling spot with plenty to see and hear will make it very difficult to keep your patient still and cooperative. When you and your little peep are ready, follow these steps:

Your chick will not like its new footwear. It might squawk and protest. It might dash around its brooder like a tottering ragdoll. It might even sit on its hindquarters, feet up, glaring at you. Don’t worry. Within an hour or two (sometimes a little longer for particularly headstrong chicks), your baby will be walking around with its new shoes. Keep the chick booties on for two to three days, changing the outer tape as needed to keep it clean, then remove the tape and examine the affected toes. If they have not yet straightened, put on a fresh pair of booties, using toothpicks if you did not do so the first time. Leave the booties on for three to five days, then check again. In the interim, be sure to add soluble vitamins to your chick’s waterer, check the brooder temperature to ensure it’s at the right level for your chick’s age, and put down paper towels or ridged shelf contact paper to provide it with a grippable surface for walking. If the cause of your chick’s crooked toe was environmental, treating the condition without fixing the cause can prolong the issue.

Grace’s little Orpington baby proved to be as feisty as Nestle: She undid her bootie by the time she got back home. Her freedom was short lived, however. Grace carefully applied a new bootie and, after a few hours, the chick grudgingly accepted her shoes. For a lifetime of full foot mobility, a few days of discomfort is worth it, even for the grouchiest little peep.