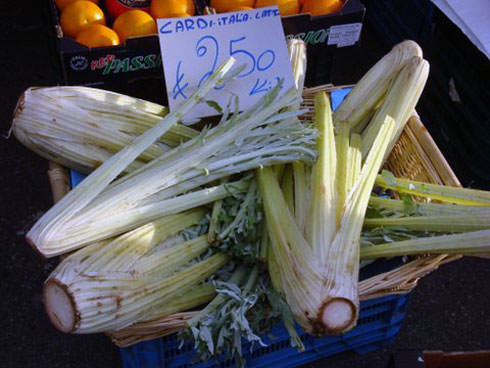 Sometimes weeds spread so quickly that they can seem like natives within a few decades of their arrival. Such was the case with cardoon, the artichoke relative Cynara cardunculus, also known as Texas Celery, artichoke thistle and cardi.

Brought to the new world in the late 1700s, cardoon used to be a fairly popular vegetable in European gardens. In the New World, the cardoon plants quickly escaped cultivation and reverted back to their wilder and spinier forms, to such an extent that, in 1832, Charles Darwin noted huge areas in Uruguay were covered so much by the thistles that no other plants or animals could get a foothold. In California, the blue-flowered, gray-leaved thistles arrived before the gold rush, and are still around today.

Here in Italy, we all still eat cardoon once in a while. I havenâ€™t grown it in the garden, just because it takes up so much space. But it is pretty tasty, and I have a hunch this weed/garden vegetable will experience a comeback in the near future, because itâ€™s yummy in a sophisticated sort of way, it couldnâ€™t be easier to cultivate and, if left to flower, it can be spectacular in the garden. In Europe, particularly in Italy, Spain and France, cardoon cultivation has continued strong since the Renaissance, and cardoon is a traditional ingredient in many Christmas recipes from the western Mediterranean area.

Cardoon does require a long growing season, so starting seeds in the earliest part of spring is advised. The plants are perennials, but will not tolerate too much winter cold, which is why the further north the grower, the more likely they will cultivate cardoon as an annual. In the warmer zones, such as in northern Africa, cardoon is harvested all winter long as a fresh vegetable. In general, cardoon grows the largest in deep, good soil and with frequent watering. Pests are minimal, and the plants are drought-tolerant, although a lack of water reduces its size. The optimal planting method is by using shoots when theyâ€™re available, but the seeds germinate quickly. Growers can select themselves and grow only the strongest of the variable seedlings that will result from sowing cardoon seed.

Cardoons need to have their stems blanched or they will be intolerably bitter. A month of being tied up and kept in the dark will make the stems much sweeter. In most places, cardboard or thick paper are used to neatly tie up the big plants in the early fall. In Italy, the plants are often treated rougher, with dirt being heaped randomly on the plants. The result of doing this is Italian cardoon sometimes becomes a mass of wildly twisted stems as opposed to the straight stems that most other places prefer.

Gardeners need to make sure cardoon plants are dry before they are wrapped, in order to avoid rotting. Plastic wrappings are also avoided for the same reason. Using gloves is a good idea when wrapping, harvesting and preparing the plants for the kitchen because even the “spinelessâ€ť varieties seem to have a lot of tiny spines.