Because of the many different ways Italian summer squash, or trumpets, can be grown, it has become one of my favorite crops. 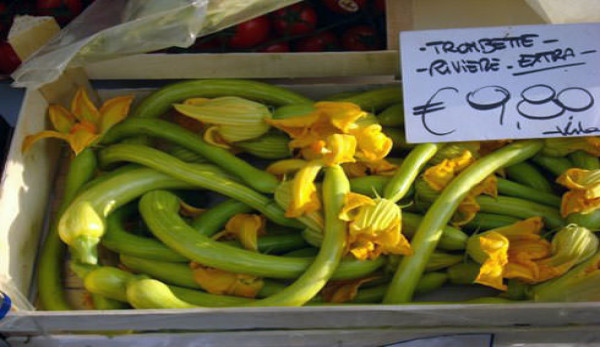 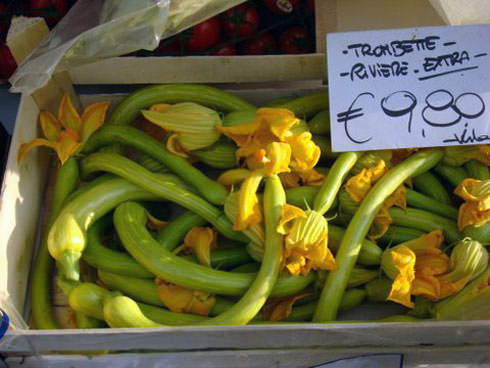 Italian summer squash, or trombette, can be grown in many different positions.

I know Iãm a broken record, but I just canãt help continuing to trumpet the praises of Italian summer squash ãtrumpets,ã or trombette, as they are called here in Italy. These long and skinny squashes are just as tasty and prolific as any other summer squash ever was.

Italian summer squash is traditionally grown on a structure that allows the developing squashes to hang. This not only keeps them cleaner than when they are grown on the ground, but it also lets them grow straighter. The only reason I can think of why straight fruits might be better is that the straight sections are a bit easier to slice up.

The real reason I like this crop is that it is a sprawling-vine type that can go up, down or horizontally. This flexibility really expands my growing area, which is limited. By being able to drape this vine down the side of a wall, have it grow up on a raised trellis or hover out in space on temporary horizontal wings, I can grow the crop using only little slivers of flat land. I donãt need the 50 square feet per plant that this size of vine wants on flat land.

I know it sounds funny, but I also like it because itãs a really pretty crop. The big, orange squash blossoms are attractively presented on a horizontal vine, with the long, pale-green squashes hanging down, ending with enormous orange blossoms.

The male blooms also hang, but they stay higher. When I plant several-dozen vines together in such a way that they all sprawl all over each other, the mass of hanging blooms is fairly spectacular. I also score good neighbor points every once in a while by gifting bags of the flowers to my neighbors who consider them a delicacy and have several different ways in which the flowers are cooked.

Like most summer squash, the smaller fruits are preferred, but it is my opinion that the fairly large squashes, up to 3 feet long and as thick as a baseball bat, can still be delicious. Once the fruits get bigger than that, and they do as Iãve seen trombette that were close to six feet long, then they cross over into the category of a short-keeping winter squash. Most of the growers in my neighborhood leave four or five extra big squashes on their summer-squash patch and let the skins harden and turn a pale brown, harvesting the big squashes after the first set of frosts, then keeping them for a month or so, when they can be cooked like other winter squashes.

Almost all of the Italian seed companies that sell to gardeners in the United States now carry trombette seeds. They may be called tromba dãalbenga or zucchina trombetta.

I suppose that this means that Americans are now catching on to this late introduction from Italy. I do what I can personally to publicize this excellent Italian squash, and I tell all the tourists I see over here that a package of trombette seeds is one of the best souvenirs one could bring home from Italy!