With their universal appeal and relative ease of growing, peas are choice crops that small-scale farmers can bank on. 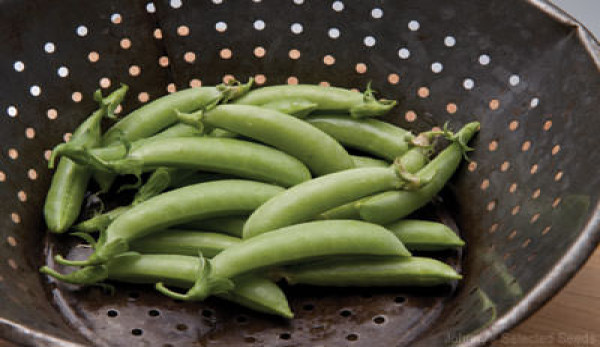 Peas have served humanity as a food source for thousands of years. Wild peas were harvested throughout the Mediterranean region beginning in Neolithic times. They were considered particularly valuable for their ability to be stored in a dry state for long periods of time and for the fiber and protein they contain. Although dried peas are still a popular culinary ingredient (split pea soup, anyone?), fresh green peas have since become the real kitchen sweetheart. Green peas are harvested in a fresh, immature state and, coming into vogue in the 1600s, were once seen in Europe as a fashionable side dish.

Shell Peas
These are best harvested when the pods are plump, as leaving them on the vine too long turns the peas starchy and dense. Like all peas, shelling types are best harvested in the early morning, when their moisture content is highest. They should be shelled as soon as possible, then refrigerated or blanched and frozen.

Sugar-snap Peas
The edible pods of sugar snaps grow plump and sweet as the seeds swell inside. Theyâ€™re harvested when the seeds are fully developed and the pod is fat. Many sugar-snap types develop a string that runs on the straight side of the pod from the stem end to the base, which is easily removed during harvest by snapping off the pod from the vine just below the flowering stem and peeling the string down the length of the pod. The string stays on the plant while the pod goes in the basket.

Snow Peas
Flat-podded snow peas are best harvested before the seeds begin to expand; later harvests could mean more fibrous pods. Ready-to-pick snow peas measure between 1 and 5 inches, depending on the variety. The pods should be crisp at harvest, and much like sugar snaps, some varieties will need to have their string removed.

Growing Peas
Peas relish cool temperatures, and planting them early or late in the season is a must. This cool-season crop is best planted as soon as the soil can be worked in the spring, but in some regions, a fall crop is possible by sowing seeds two months before the first expected fall frost. In myÂ zone-5 garden, I head out to plant my peas as early as St. Patrickâ€™s Day if the soil isnâ€™t too wet. Some years, I sow more seeds in late August for an autumn harvest.

Peas will germinate in soil temperatures as low as 40 degrees F, but theyâ€™re prone to rotting before germination if the soil is too wet. Before planting, be sure the soil doesnâ€™t stick to your shovelâ€”if it does, the soil is too wet, so wait a few days and try again. The idealÂ soil pH for optimum pea growth and production is between 6.0 and 7.0, and vines should be sited in full sun. Peas are sown 1 inch apart and 1 inch deep, ideally in well-drained soil with ample organic matter. Spacing the rows 12 to 18 inches apart gives ample room for proper air circulation, which can cut down on common pea diseases, such as powdery mildew, and allows enough room for harvesting.

Before planting the seeds, consider coating them with a bacterial inoculant. Pea inoculant introduces and encourages the root-colonizing bacteria that form nitrogen-fixing nodules on the pea roots. These nodules are unique to plants in the pea and bean family and allow them to convert nitrogen from the air into a form that is usable by plants. Although the bacteria that form the nodules are present in most healthy garden soil, coating the peas with inoculant before planting means faster colonization, larger plants and higher yields. Simply place the pea seeds in a resealable plastic bag with the inoculant and give it a good shake. Alternatively, you can sprinkle a bit of the inoculant powder into the planting row before covering the seeds with soil.

Bushes Vs. Vines
All peas are either bush or vining varieties, so you might need to provide aÂ trellis or netting for support. Check each variety carefully for growing-height informationâ€”any selection growing to 30 inches or more should be trellised. This is easily done with chicken wire or garden netting by positioning it along the row between two hardwood stakes. You can also support peas more naturally by using “pea brush.â€ť This age-old technique involves inserting numerous branched twigs into the ground alongside of a row of newly planted peas. The tendrils grasp the twigs and easily climb up the branches. At the end of the year, the twigs can go into the compost pile along with the vines.

No matter which type of pea strikes your fancy, growing these delicious garden gems is a hobby-farming must.

About the Author: Horticulturist Jessica Walliser dreams of growing Eastern Prince, a fruit-bearing magnolia vine, in her zone-6 garden. She is co-host of KDKA radioâ€™s The Organic Gardeners in Pittsburgh and author of several gardening books, including Grow Organic (St. Lynnâ€™s Press, 2007) and Good Bug Bad Bug (St. Lynnâ€™s Press, 2008).