Sweet potatoes need and deserve some respect due to the claim that they are the most nutritious vegetable grown on the planet. 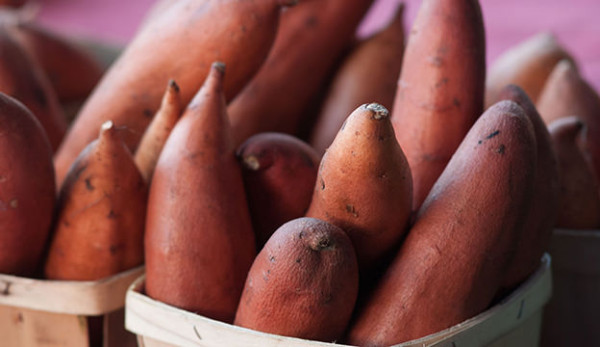 Sweet potatoes are surely one of the most misunderstood vegetables. Often confused with yams, usually thought of as just a holiday-dinner side dish (never mind the degrading marshmallow accompaniment), sweet potatoes are frequently referred to as “easy house plants for kids to grow in their schoolrooms.â€ť Hummph! Somebody needs to hire a public relations rep for this vegetable and sing the praises of one of the most versatile and nutritious vegetables in the world.

Yams are a common crop in many parts of the world, and although popular in Africa, the Caribbean and Pacific islands, they are almost never grown in the United States. They are monocots (grasses) of the Lily family and the genus Dioscorea. Sweet potatoes are dicots (broad-leafed plants) of the Morning Glory family and the genus Ipomoea. Yam tubers, which grow up to 8 feet long and weigh 100 pounds, are generally larger than sweet potatoes, which average less than 1 foot in length and weigh less than 1 pound each.

Yams are dry, starchy and far less nutritious than sweet potatoes. The active ingredient for many birth-control pills is derived from yams. Sweet potatoes have no such effect.

In fact, many claim the sweet potato is the single most nutritious vegetable grown on the planet. During the first two centuries of European settlement in North America, sweet potatoes were prized by colonists and European royalty alike, prescribed by doctors as a perfect food for children, and highly valued by mariners who were concerned about scurvy and food storage.

Although most nutritional calculations are based upon the measurements of cooked pulp, the edible skins of sweet potatoes are highly nutritious and are eaten with enthusiasm in many households. The skin does in fact contain even higher amounts of many of the sweet potatoâ€™s legendary nutritional elements, such as beta carotene.

There are two main types of sweet potatoes: dry flesh and moist flesh. In general, the older varieties on the East Coast are of the yellow, dry-flesh type, whereas the newer varieties grown in Louisiana are of the orange-flesh, moist type.

Beauregard is the predominant variety grown in Louisiana and will produce satisfactory yields over a wide range of soil types. Another popular variety of the moist-fleshed type is the Centennial, which was also developed in Louisiana.

The Jersey and Jewel sweet-potato varieties are representative of the drier yellow-fleshed types, and are still commonly grown in North Carolina and other eastern areas. In the 1960s, California growers faced a serious virus problem called Russet Crack disease. The University of California, Davis, started a breeding program and now provides virus-free stock to growers. Most southern states have similar university-based sweet-potato breeding programs.

As is the case with many other crops, new sweet potato varieties appear frequently and take the place of older favorites. New growers will want to contact local extension and university programs to get the latest variety news.

American Indians on the Eastern coastal plains and the Mississippi River delta were growing sweet potatoes when Columbus discovered the New World, so itâ€™s no real surprise that North Carolina and Louisiana are now the leading producers in the United States. But Mississippi is a large and proud contributor, Georgia grows a hefty amount, and as usual, California produces a fair share, too.

Sweet potatoes like warm weather, sandy soil and a long growing season. They are planted around May and harvested in October. The tubers form best in loose, well-drained soils, as soggy soils will not produce good tubers. The crop has a relatively low nitrogen requirement, as excessive nitrogen fertilization produces heavy top growth but fewer underground tubers.

Most sweet-potato growers produce their own cuttings for transplant from seed potatoes selected from the previous yearâ€™s crop. The small seed potatoes are planted about 2 inches deep in the seeding beds when the soil temperature reaches 65 to 70 degrees F, usually sometime in March. Some growers cover the rows with plastic film to warm the soil and encourage earlier sprout production.

By April, the sprouts are large enough (12 to 14 inches tall) to take the cuttings. Cuttings should be taken at least 2 inches above the soil; using “cleanâ€ť cuttings (instead of rooted cuttings) helps guard against the spread of diseases from the seeding bed to the field. These rootless cuttings will develop roots quickly when planted 4 or 5 inches deep in warm soil. Growers often continue taking cuttings and transplanting them to the fields throughout April, May and June. Plants are spaced a foot apart in the fields, with rows being constructed on slightly raised beds about 3 to 4 feet apart.

As the sweet-potato crop starts to grow, farmers usually need to do some surface weeding in the rows before the vines cover the beds and shade out the weeds. Any irrigation or fertilization is usually performed during the early stages of crop growth to encourage a robust young root system and thick vines. When the plants start getting larger, growers often pile soil up around the stems, in much the same manner as regular potatoes are “hilled.â€ť This practice goes well with later weeding work, provides more loose soil for tuber formation, and also seems to help reduce sweet-potato weevil problems.

The main sweet-potato pests are insects, nematodes and diseases that affect the roots. Fusarium wilts cause vascular systems to collapse and become unable to transfer water and nutrients up from the roots.Â  Root-knot nematodes cause deformed roots and tubers. The sweet potato weevil is an insect whose larvae can feed inside stems, where damage is relatively minimal, but they can also infest tubers, which is a serious problem. Weevil-damaged tubers develop bitter substances that prevent the tubers from being used even as animal fodder.

Most of these sweet-potato pest problems can be overcome by good sanitation and cultural practices, including the use of disease- and weevil-free seed potatoes for transplants, rotating sweet-potato fields to discourage yearly pest carry-over, and using rootless cuttings for transplants.

Moving sweet-potato cuttings and seed potatoes from one county to another in sweet-potato growing areas (particularly within Louisiana and North Carolina) is often illegal, due to the high value placed upon preventive practices. Keeping pests out of a growing region has proved to be a far more successful strategy than any post-infection treatments.

Healthy sweet-potato vines produce a bushel of sweet potatoes from a 25- to 30-foot-long row, with an average yield of 320 bushels per acre. The first tubers are ready for harvest in late August, and the harvest usually continues until early November.

Most of the increase in tuber size occurs during the last three or four weeks before harvest. Potatoes that remain in the soil continue to grow and increase in size until the weather cools. Surprisingly, one problem new growers sometimes have is that they fail to harvest before the potatoes become too large for market preferences.

During the actual harvest, it is important to make every effort to minimize injuries to the tender skin on the roots. Undamaged potatoes will sell better and have a much longer storage life. Automatic harvesters are sometimes used, but they cause excessive skin injuries, so a majority of the sweet potato fields are ploughed and then the tubers are harvested by hand.

It is important to avoid freshly harvested sweet potatoes being exposed to the sun for more than 1 hour. Growers often shade the harvested boxes of potatoes with cut vines while they remain out in the fields. At the late end of the season, growers are careful to harvest before frost kills the vines, because if the crop remains in the field after a frost, the roots may begin to decay.

Overall, the nutritional value of sweet potatoes, the relative ease of culture, and the strong storage and shipping capacity of the crop are factors that make the sweet potatoes one of the most unique crops in the U.S.

This article first appeared in the August/September 2003 issue of Hobby Farms.