Photo by Audrey Pavia Mr. Molly, crowing his brains out. When I first got my chickens, a friend on a chicken message board warned me that the crowing of bantam cocks could be quite annoying. Unlike standard-size roosters, their crows are higher-pitched and irritating. I was so in love with my two little roos that […] 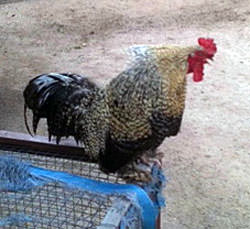 Mr. Molly, crowing his brains out.

When I first got my chickens, a friend on a chicken message board warned me that the crowing of bantam cocks could be quite annoying. Unlike standard-size roosters, their crows are higher-pitched and irritating.

I was so in love with my two little roos that I thought nothing of this. How could the crow of any rooster be annoying? A roosterâ€™s crow represented morning on the farm â€” the dawn of a new day. Crowing would be glorious â€¦ or so I thought.

Fast forward a few years to a small, 1/2-acre property with two bantam roosters who like to compete with each other over who can have the last crow. I wouldnâ€™t mind it so much if they did it when I was indoors. But it never fails; they always start their competition when Iâ€™m outside getting the horses ready for a ride, and trying to have a conversation with someone.

In fact, having someone else in the yard (a â€śstrangerâ€ť) seems to be what sets them off.

â€śI donâ€™t know that person,â€ť I can hear Mr. Mabel thinking as he sends telepathic waves to his brother.

When it happened today, I got fed up. I was picking out my horseâ€™s feet while trying to talk to my friend Cathy, who was standing right next to me. Iâ€™d start to say something, and then one of the roosters would screech.

â€śWhat?â€ť Cathy would say in response.

â€śI said â€¦â€ť Iâ€™d reply, only to be drowned out by another crow.

Itâ€™s not like the roosters were on the other side of the yard, either. They were standing only a few feet away, looking right at Cathy, deliberately crowing as loud as they could.

After a few exchanges of â€śWhat was that?â€ť and â€śI didnâ€™t hear you,â€ť I got fed up. I picked up the garden hose and squirted Mr. Mabel right in the middle of his cock-a-doodle-do.

The crowing ended abruptly as he ruffled his feathers and ambled off into some bushes. Figuring I had put a stop to the nonsense, I started my conversation again, only to have him respond by crowing again, this time from the safety of the bushes and out of reach of the garden hose.

Thatâ€™s when I decided to give up.

â€śIâ€™ll tell you the rest when we get out of here,â€ť I said to Cathy, in disgust. The roosters had won.