The cucumbers in the garden are now producing their usual early summer bounty. 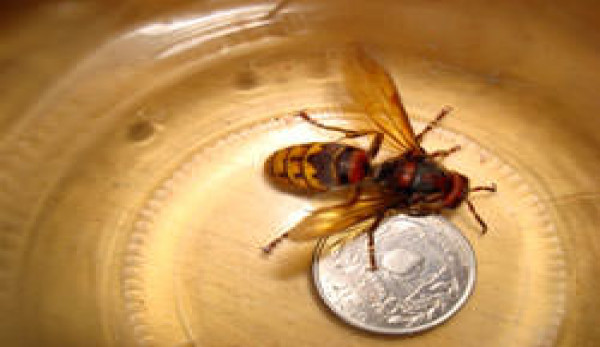 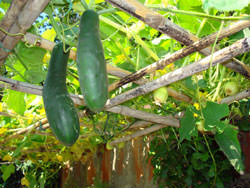 We’ve had a huge production of cucumbers this year, meaning lots for salads and cold soups.

TheĀ cucumbers in the garden are now producing their usual early summer bounty. My cucumbers seem to always produce in a big rush and then the production of new fruits slows when it gets really hot. We are growing both standard, Straight Eight, green-type cukes and the smaller but tastier lemon cucumbers. The lemon cucumbers are a bit slower to produce the majority of their fruits and seem to last better into the heat.

I really like the way the lemon cucumbers taste, and I eat the rind and all when I pick a few for my gardening snacks. Lemon cucumbers also are a strong emotional plant for me, because I remember growing them in my very first vegetable garden when I was about 6 years old. I grew icicle radishes, marigolds and lemon cucumbers, and I am still quite happy to have all three in my current garden. (By the way, Iām blaming the wacky weather that annoyed theĀ local bees for the large number of bent green cucumbers. I think the flowers didnāt get pollinated completely and so the fruits develop crookedly.)Ā

With all this production, we have way too many cucumbers to eat in salads, so we are also eating a lot of cold cucumber soup these days. My wife puts them in the blender and adds some yogurt and spices and we eat it right away as well as save some in the refrigerator. Itās a great dish for lunch on a hot day. We have a hard time finding the classic dill seasoning here, so we often just use a few bits of wild anise, which tastes fine. Cucumbers are called citrioli here, and my neighbors accept my cucumber gifts with big smiles.Ā 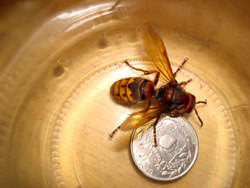 The European Hornets in my backyard in Italy look similar to the wasps we had in Las Vegas, Nev.

Iāve seen seeing a bunch of big wasps in the garden lately. They seem like the same wasps we had in Las Vegas, but they are actually the European Hornet, Vespa crabro, which has been introduced to the U.S., mostly on the eastern half of the country.

All wasps are called vespa here in Italy, and these big wasps are called calabrone. The genus for yellow jacket wasps is Vespula. These big hornets look terrifying, but they are actually quite peaceful and deserve more respect from gardeners because they eat mostly flies. I did accidentally bump against one of their nesting sites last year and got stung. I had a big lump on my arm for a week, but I wonāt hold that against these guys.Ā

This fellow (pictured above) was buzzing near my garden workbench and I managed to get a glass jar over him. I went up to my office and found a U.S. quarter so I could have something that my American friends would understand to show the size of the beast. Photographing him was a dicey trick, because the camera didnāt fill the mouth of the glass jar, and he came close to getting out several times. Of course, after his photo session, I thanked him for his time and let him go.