Cultivate Good Fungus in Your Soil 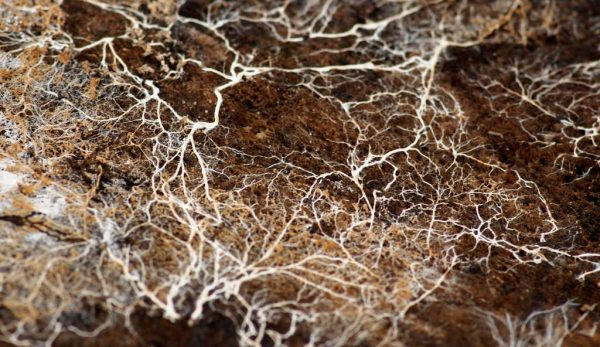 The structures analogous to roots in the fungal world are called hyphae, which form a network called mycelium. The interactions between plants and fungi are both expansive and poorly understood, but as ecological and agro-ecological scholarship interrogates these complex life webs, it becomes more and more apparent that cultivating with fungi in mind also benefits plant life.

Studies have shown that trees in a forest ecology use mycelial networks like an Internet to send chemical signals to one another about predation or environmental conditions, as well as to share nutrients. Insects, like bees, sip water from fungal mycelium to upregulate their immune response, giving them extra armour against colony collapse pathogens and pesticides. Around 90 percent of known plant species have some sort of specialised fungal symbiont intertwining with their roots, in an arrangement collectively referred to as a mycorrhizal association.

In the garden, fungal associations can be carefully cultivated with a little bit of knowledge and a lot of experimentation.

The first step to successful fungal colonization of the soil is to refrain from tilling whereever and whenever possible, using top-dressings of mulch as a weed-barrier instead of disruption of the soil-life web. Decaying organic matter provides nutrition to fungi, which then becomes bioavailable to surrounding plant life.

There are many beneficial fungal species that donâ€™t cause fungal disease. Some fungi are lignicolous, meaning they feed on the compound called lignin in decaying wood and leaf litter. Others are saprotrophic, meaning theyâ€™re more likely to feed on decaying grasses. Both can be inoculated into the soil using spores, or a prepared granular inoculant like MYKE, used when planting trees.

Mycelial networks in the soil will provide increased water retention, increase pest and disease resistance to connected plants, and also provide mushrooms, which are fodder for bacteria, insects, animals and other members of a healthy organic garden ecology. Working with mushrooms rather than against them can be a boon for your plants and your local biome.